Trump feels terribly for Kavanaugh: He doesn't deserve this

President Trump amplified his support Tuesday for Supreme Court nominee Brett Kavanaugh in the face of a sexual assault allegation, saying he feels “terribly” for Kavanaugh and his family.

Speaking from the East Room of the White House, Trump knocked Democratic Sen. Dianne Feinstein for waiting until after the confirmation hearings to send the allegations to the FBI.

“That's what you have hearings for,” he said. “You don't wait until the hearing is over and then all of a sudden bring it up.” 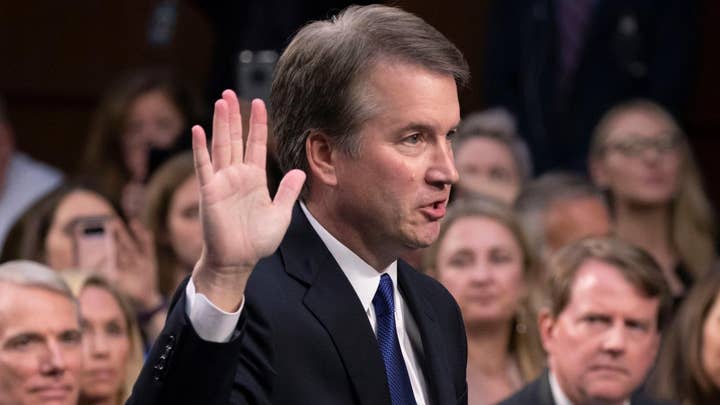 Over the weekend, Christine Ford, a California-based professor, said Kavanaugh, while in high school, pinned her down, tried to remove her bathing suit and put his hand over her mouth when she attempted to scream. Kavanaugh has denied the allegation.

Ford went public after Feinstein released a statement to the media last week saying she had forwarded information about Kavanaugh to the FBI. Feinstein, who received a letter from Ford in July, has been criticized for not going public with it earlier.

“Why didn't she bring it up?” Trump said of Feinstein. “Why didn't the Democrats bring it up then? Because they obstruct and because they resist. That's the name of their campaign against me. They just resist and they just obstruct.”

The Senate Judiciary Committee has scheduled a hearing for Monday for Kavanaugh and accuser Ford to answer questions from senators about the allegation, though it’s unclear if Ford will accept the invitation. Thursday’s committee vote on Kavanaugh’s nomination has been delayed as a result.

“It's a shame because this is a great gentleman,” Trump said of the controversy.

But the president said he believes “we should go through a process” to examine the allegations because “there shouldn't even be a little doubt.”

Kavanaugh continues to deny the allegations and says he’s willing to testify on the issue.

The joint presser came after a day of meetings with Duda, the president of Poland. Earlier, Trump said he was "very seriously" considering a greater U.S. troop presence in Poland.

Trump told reporters in the Oval Office that Poland was "willing to make a very major contribution to the United States to come in and have a presence in Poland." The U.S. president said it was "something we will discuss."

Facing Russia's increased military activity in the region, Poland has been pressing for the 3,000 U.S. troops now deployed in Poland on a rotating basis to be upgraded to a larger, permanent presence. A decision from the U.S. could come early next year.