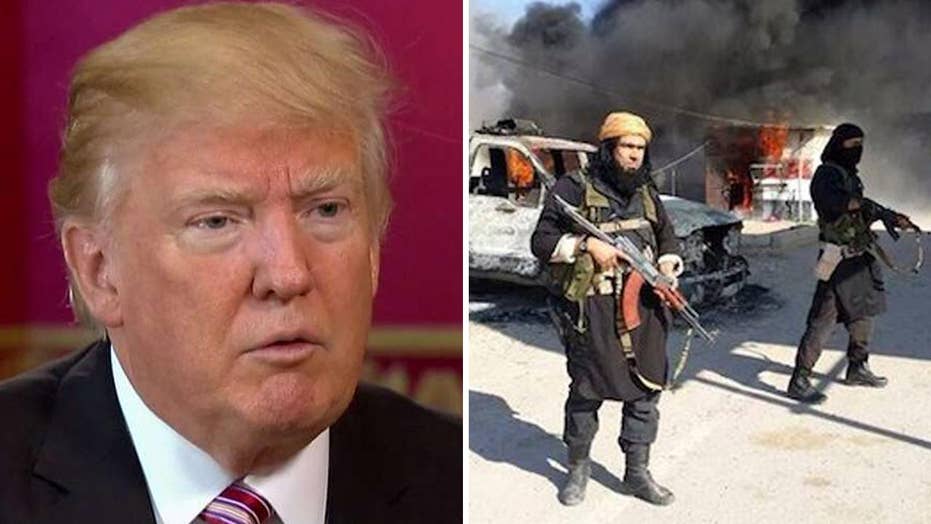 President addresses the use of waterboarding in interrogations, US relationships with other nations in 'Hannity' cable exclusive

President Trump told Fox News’ Sean Hannity Thursday night that he is reviewing the case of an imprisoned Navy sailor who took photos inside a submarine.

“I’m actually looking at it right now,” said Trump, who as a candidate often cited his case as unjust. “I think it’s very unfair in light of what’s happened with other people.”

Trump has often compared the issue with Kristain Saucier, the sailor, with Hillary Clinton’s email scandal.

Supporters of Saucier, 30, said the one-year sentence was overly harsh.

“It was a hyper-charged political atmosphere,” Daigle said, “politics played a role in it.”

Saucier, who served as a machinist's mate aboard the USS Alexandria from 2007 to 2012, used his cellphone to photograph parts of the submarine's nuclear propulsion system while it was docked at the Naval Submarine Base in Groton, Conn.

Saucier, who is married and has a 2-year-old daughter, began his 12-month sentence in October at the Federal Medical Center at Fort Devens, Mass.

He was convicted of unauthorized retention of national defense information, which is a felony, and received an "other-than-honorable" discharge from the Navy. He faced a possible 10 years in jail, his lawyers said.

Saucier admitted to taking six photos of classified areas inside the USS Alexandria in 2009 when it was in Groton and he was a 22-year-old machinist mate on the submarine. The photos showed the nuclear reactor compartment, the auxiliary steam propulsion panel and the maneuvering compartment, prosecutors said.

Saucier took the photos knowing they were classified, but did so only to be able to show his family and future children what he did while he was in the Navy, his lawyers said. He denied sharing the photos with any unauthorized recipient.

"It was a foolish mistake by a very young man," his lawyer, Greg Rinckey, said after the sentencing. "It's a very sad case because Kristian Saucier is a fine young man. We don't believe this was really his true character."

Federal prosecutors said the FBI and the Naval Criminal Investigative Service were never able to determine if the photos had been distributed to unauthorized people because Saucier destroyed key evidence including his laptop computer, a camera and a memory card after an interview with the FBI in 2012.