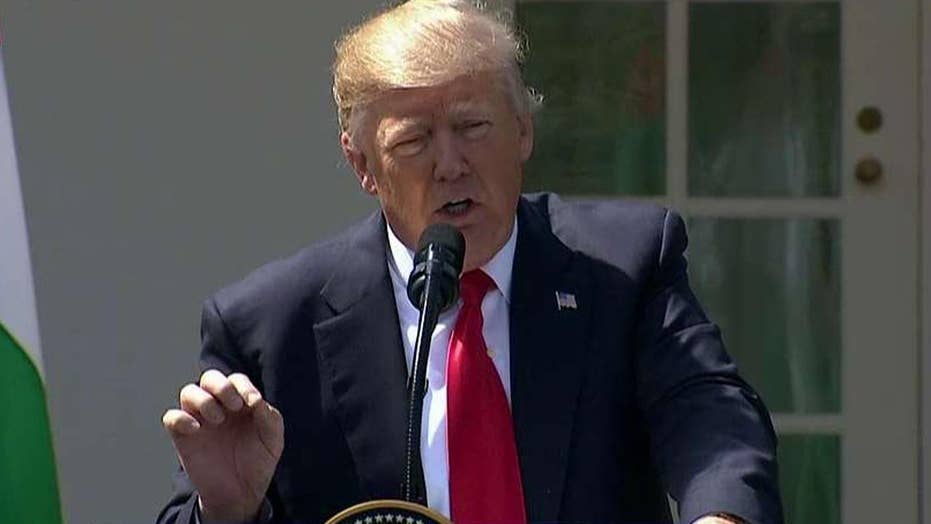 President Trump said Wednesday he’s now responsible for addressing the Syria crisis and other pressing international concerns but also blamed the Obama administration for the turmoil around the world.

"I have to just say that the world is a mess. I inherited a mess," he said.

Trump, at a White House press conference, said then-President Barack Obama had a “great opportunity” to solve the situation in Syria, a country being destroyed in a six-year-old civil war.

Now with President Bashar Assad accused of another chemical attack Tuesday that killed dozens of civilians, Trump criticized Obama for taking no action after Assad earlier crossed that “red line” by using chemical weapons in 2013.

“I think that set us back a long way, not only in Syria but in the rest of the world,” Trump said in the Rose Garden, alongside Jordan King Abdullah II. “I now have responsibility ... and carry that proudly.”

Likewise on the threat posed by North Korea's missile tests, Trump said his "responsibility" to address it "could've ... been made a lot easier if it was handled years ago."

Trump plans to meet Thursday with China's Xi Jinping, where the North Korea response will be on the table.

On another front, Trump called the 2015 international agreement with Iran that eased billions of dollars in economic sanctions against the rogue nation in exchange for leaders curtailing their nuclear weapons program “one of the worst deals I have witnessed.”

“And I’ve witnessed some beauties,” said Trump, an international businessman before he became president.

Trump said the deal was bad for the United States and much of the rest of the world, in part because it was never ratified by Congress.

He said he will do “whatever it takes” to fix the situation.