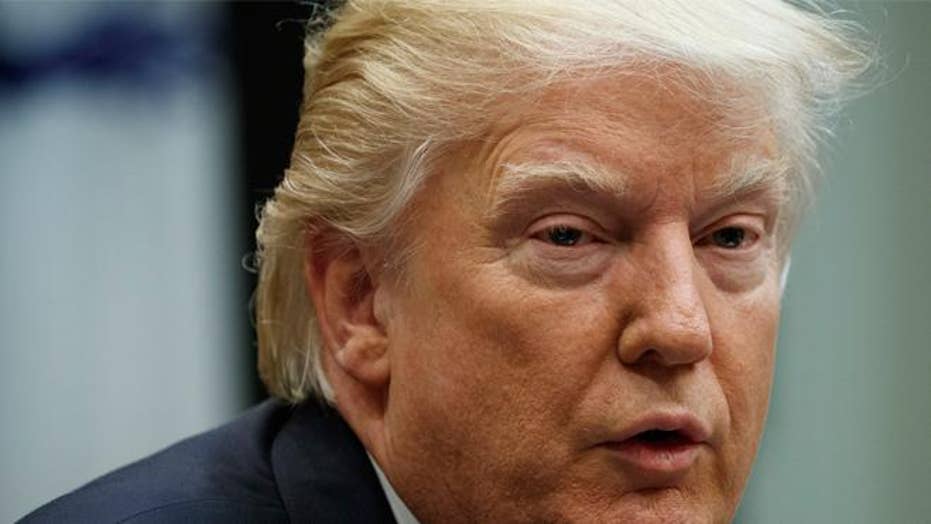 Strategy Room: David Mercer and Brad Blakeman on the White House's relationship with the GOP on Capitol Hill

President Trump, after enjoying a brief stretch of party unity in the wake of the rowdy 2016 race, is facing renewed criticism from the Republican ranks -- upping pressure on him to smooth over tensions when he addresses a Joint Session of Congress next week.

While Trump won the Republican nomination, and to some extent the presidency, without a great deal of support from congressional Republicans, they are now one of his most important constituencies. The president needs their help not only to confirm his remaining Cabinet picks but turn his ambitious policy agenda into action.

Asked Wednesday about the president's goals for his Feb. 28 speech, Press Secretary Sean Spicer said Trump will lay out his "vision" and discuss the "problems we face" -- and a blueprint for where to go from here.

But some of the GOP lawmakers who could be influential champions of that agenda -- on ObamaCare repeal, tax reform and more -- are increasingly getting on his case over recent controversies. The tensions could test the fragile peace that has existed between Trump and Capitol Hill Republicans in the aftermath of their November win, and their cooperation going forward.

Sen. John McCain, R-Ariz., who was never shy criticizing Trump during the campaign, seemingly has returned to his “maverick” role. On Sunday, reacting to a tweet Trump sent Friday calling the press “the enemy of the American People,” McCain warned that without a free and adversarial press: “That's how dictators get started.”

"They get started by suppressing free press," McCain told NBC’s "Meet the Press." "In other words, a consolidation of power when you look at history, the first thing that dictators do is shut down the press. And I'm not saying that President Trump is trying to be a dictator. I'm just saying we need to learn the lessons of history."

In a speech at the Munich Security Conference in Germany on Friday, the Arizona senator didn’t mention Trump by name, but said the founders of the conference would be alarmed “more of our fellow citizens seem to be flirting with authoritarianism.”

He also noted “the hardening resentment we see towards immigrants and refugees and minority groups, especially Muslims” – an apparent reference to Trump’s attempts to limit refugees and migrants from some Muslim-majority countries.

Some Republicans have criticized McCain. Sen. Rand Paul, R-Ky., not known for his strong support of Trump, said on ABC’s “The Week” that McCain “has been wrong on just about everything over the last four decades.”

“We’re very lucky John McCain’s not in charge because I think we’d be in perpetual war,” he added.

But the 2008 GOP presidential nominee is not the only Trump critic piping up from the Republican side, including in the libertarian wing where Paul often resides.

.@POTUS's constant fear mongering to undermine support for our constitutional system of checks and balances is irresponsible and dangerous.

Some of the criticism could go on to hamper Trump’s ability to get things done, not just in the form of roadblocks to his agenda but pesky congressional probing of his administration.

On Feb. 17, Amash, along with Rep. Walter Jones, R-N.C., wrote to the Justice Department, FBI and director of national intelligence asking for a briefing on allegations the Trump campaign had contact with Russian officials, as part of broader concern lawmakers have voiced over Trump's softer stance on Russia.

“I want to know, did Gen. Flynn do this by himself or was [he] directed by somebody to do it?” Graham said on CNN.

Others in the party have come to Trump’s defense on the issue. House Intelligence Committee Chairman Devin Nunes, R-Calif., has instead asked the FBI to probe the leaks coming from the intelligence community.

Rep. Jason Chaffetz, R-Utah, in his capacity as head of the House Oversight Committee, has tried to strike a balance, at times waving off Democratic outrage over Trump and other times moving to police the administration as he did during the Obama era.

Earlier this month, he wrote to the Office of Government Ethics over comments White House counselor Kellyanne Conway made on "Fox & Friends" in which she encouraged people to buy from Ivanka Trump’s clothing line. Chaffetz called the remarks  “unacceptable.” The OGE went on to recommend that Conway be investigated by the White House for the remarks.

Trump also recently lost GOP support on a key Cabinet vote. The objections of Sens. Lisa Murkowski, R-Alaska, and Susan Collins, R-Maine, put Education Secretary Betsy DeVos’ nomination in peril to the point Vice President Pence had to act as a tie-breaker in her confirmation vote.

It remains to be seen how these developments will shape next week's address and cooperation going forward. Aware of the need to convince the Reaganite Republican establishment to stay on board, Trump reportedly is angling for a sunnier, Reaganesque speech to boost spirits.

Axios reports that the speech will be “optimistic and uplifting,” with an adviser telling the outlet Trump is "determined to capture the sunny optimism of Reagan to temper the populist anger reflected in his core policies."

Spicer said Wednesday the address "absolutely" will have an optimistic tone.

Republican leaders, meanwhile, have largely sought to downplay any intra-party criticism of Trump.

“I’ve been pretty candid with him and all of you I’m not a great fan of daily tweets. What I am a fan of is what he’s been actually doing,” Senate Majority Leader Mitch McConnell, R-Ky., told reporters on Friday.