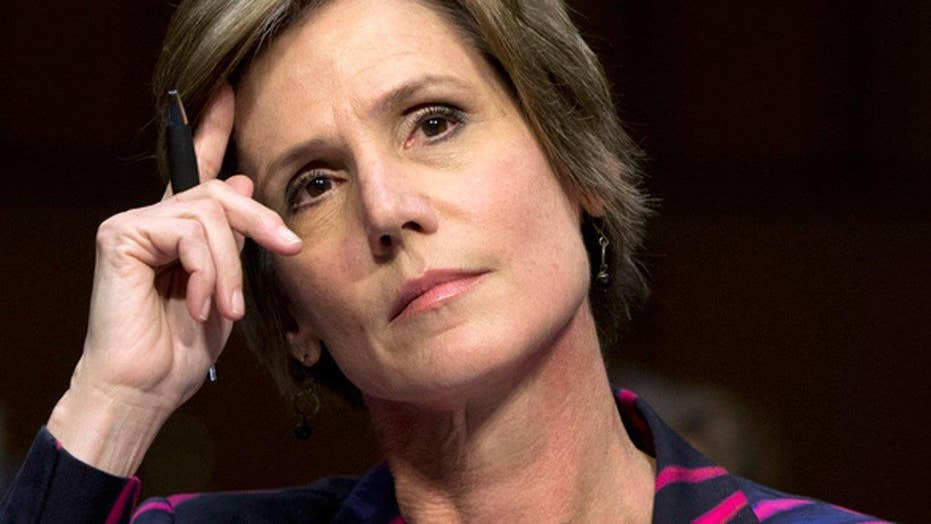 White House statement: Acting Attorney General Sally Yates, a holdover from the Obama administration, was weak on border and betrayed her office and her country

An acting attorney general who ignores executive orders, a Secret Service agent who won’t risk her life for the President and federal employees tweeting photos of crowds to embarrass the commander in chief: These cases of an anti-Trump bureaucracy could just be the tip of the iceberg looming before the new administration.

Federal employees know new presidents mean new agendas to carry out, but the broad philosophical differences between the Obama and Trump administrations mean more clashes are likely coming, say Washington veterans. Driving the conflict, they say, is an administrative layer that lies between entrenched political appointees and entrenched civil servants.

“We had to deal with political appointees trying to burrow themselves into the federal civil service -- these are the people who are hostile to the president’s agenda,” said Robert Moffit, a former assistant director of the office of Personnel Management in the Reagan administration and now a senior fellow at the Heritage Foundation. “The bureaucracy is often resistant to change, so President Trump needs to make sure the agencies are properly staffed with career civil servants and political appointees to ensure his agenda can be properly and fully executed.”

These cases of an anti-Trump bureaucracy could just be the tip of the iceberg looming before the new administration. (AP)

On Monday, the White House fired Obama holdover Sally Yates from her role as acting U.S. attorney general just hours after she directed Department of Justice attorneys not to defend President Trump’s executive order calling for a temporary ban on refugees and immigrants from seven designated countries. It should never have come to that, according to Fox News Senior Judicial Analyst Andrew Napolitano, who said Yates had a duty to resign or defer to a subordinate if she could not carry out orders.

“Sally Yates is a highly regarded lawyer, but this was intolerable,” Napolitano said. “Instead of going out quietly with cake and candles, she thumbed her nose at the President of the United States, and he properly fired her.”

It was just the latest, high-profile example of hostility between bureaucratic agencies and the White House as President Trump embarked on the second week of his presidency. Last week, reports surfaced that Denver Secret Service Special Agent in Charge Kerry O’Grady posted a message on Facebook last year saying she would go to jail rather than “take a bullet” for Trump. Grady has since been placed on administrative leave.

The Interior Department was forced by the Trump administration to close its official Twitter accounts last week, reportedly in response to the National Park Service retweeting two unflattering posts about the size of the crowd at Trump’s inauguration.

Dozens of unofficial Twitter accounts have cropped up, many borrowing the names and logos of federal agencies, to protest Trump. One alleged NASA account described itself as “The unofficial ‘Resistance’ team of NASA, and another that claims ties to the Environmental Protection Agency, notes in its bio that “Environmental conditions may vary from alternative facts.”

While those incidents were anecdotal, transitions far less polarizing than the one currently taking place have generated conflict between the incoming administration and the bureaucracy. Trump’s vow to “drain the swamp,” which appears to apply to both the bureaucracy and the hold lobbyists have on lawmakers, is no novel concept, according to Karl Rove, a Fox News contributor and former senior adviser to President George W. Bush.

“This is Trump’s colorful way of putting it,” Rove said. “Each president comes in with the intent to clean the stables.”

“No, this was not some protest by State Department officials against President Trump. But when you ask people to leave their jobs and there is no timeline in sight for when they’ll be filled, it’s concerning,” said Fox News Contributor and former State Department spokeswoman Marie Harf. “It’s just the latest blow in a series of things that have happened that makes career diplomats very nervous.”

Harf was referring to some of the actions taken by President Trump in the opening days of his administration against bureaucratic agencies -- such as his freeze on most federal hiring and muzzling of agencies like the Environmental Protection Agency in an effort to purge their government websites of any remnants of policy from the Obama administration.

“There is a lot of rhetoric about the federal workforce and this notion that bureaucrats aren’t playing an important role and it’s very disheartening,” Harf told Fox News.

Georgetown Political Science Prof. Lynn Ross, who worked for the federal government for 15 years, said transitions are typically “tense” but that incoming appointees have to learn to work with the holdovers.

“There is a natural tension that exists and it’s typically because the party is changing,” Ross, who experienced the transition from Clinton to Bush while working in the Office of Management and Budget, told Fox News. “But we know that political appointees usually end up relying on civil servants to teach them how to be successful managers within the U.S. executive branch.”

Dennis Riley, author of “Controlling the Federal Bureaucracy,” agreed, but said bureaucrats with rigid beliefs can find themselves in a difficult position, while those with more flexible agendas can flourish.

“Bureaucrats’ greatest weapons are knowledge and time, but of course, some like those in the EPA, could feel their time is running out,” Riley told Fox News. “If their policies are in line with what he wants, it really can increase their bureaucratic status.”

A source within the DOJ told Fox News that the career civil servants are “the backbone of government.”

“They are the ones who keep the train on the track, regardless of who the conductor is,” the source said.

But Moffit told Fox News that if those civil servants are not in line with the president’s agenda, it is best that they leave.

“I applaud people leaving their posts if they don’t think in good conscience they can carry out the president’s policies,” Moffit said. “That is much better than staying in the civil service and trying to undermine the will of the president and the American people.”