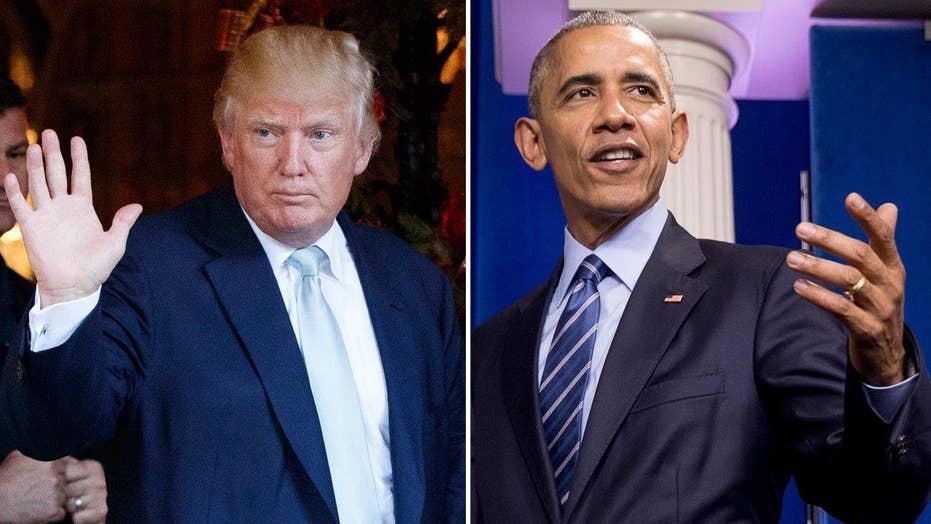 Obama vs. Trump on handling Putin

The feud continues between the current president and the president-elect. 'The O'Reilly Factor' debates who will handle Putin better

Appearing late Wednesday outside of his Mar-a-Lago resort in Florida, Trump told reporters the transition was going “very, very smoothly” and that he had a "general conversation" that was "very, very nice.”

The conciliatory tone was a contrast from the combativeness shown on Twitter after Obama claimed in a podcast interview published Monday that he could have defeated Trump in November.

“If I had run again and articulated it, I think I could've mobilized a majority of the American people to rally behind it,” Obama told former adviser David Axelrod.

Trump promptly responded to Obama’s parting shot with one of his own.

“President Obama said that he thinks he would have won against me. He should say that but I say NO WAY! - jobs leaving, ISIS, OCare, etc.,”

A day later, Trump blasted his predecessor again for campaigning “hard” and “personally” and maintained he was doing his “best to disregard the many inflammatory President O statements and roadblocks. Thought it was going to be a smooth transition - NOT!

The post-election detente seemed a distant memory as bashed the Obama administration's treatment of Israel, asserting that they had abandoned a long-standing ally by refusing to veto a UN resolution condemning the expansion of settlements into the West Bank.

"We cannot continue to let Israel be treated with such total disdain and disrespect. They used to have a great friend in the U.S., but not anymore," he tweeted.

“The beginning of the end was the horrible Iran deal, and now this (U.N.)! Stay strong Israel, January 20th is fast approaching,” added Trump in another tweet.

While a more deferential Trump appeared before the press, he saved some fire to criticize a lengthy speech on Middle East relations delivered by Secretary of State John Kerry earlier in the day.

“It speaks for itself,” he said of Kerry’s remarks. “It’s pretty obvious. We have different views. I think it set us back. We’ll see what happens after Jan. 20, right? You’re going to be very impressed.”

With the Obama administration's reponse to Russia’s alleged interference in the November election, it is likely Trump will find another opportunity to hit back at his on-again-off-gain friend.