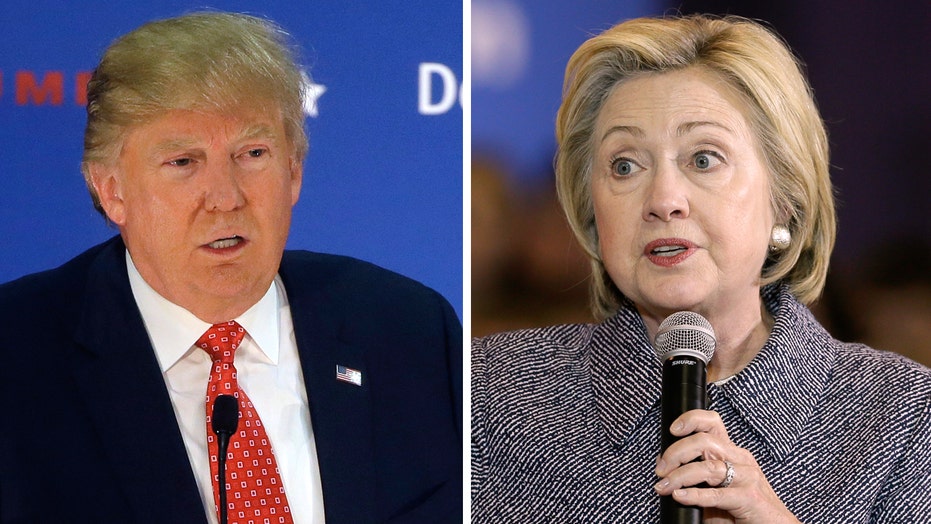 Strategy Room: Ellen Ratner and Brad Blakeman weigh in on whether a new Rasmussen Report accurately represents who could be in the 2016 general election

Donald Trump has managed to draw Hillary Clinton into a war of words which could serve to elevate his standing even more in advance of February’s lead-off nominating contests.

The back-and-forth started with the GOP front-runner using off-color language to describe Clinton’s 2008 defeat at the hands of then-Sen. Barack Obama, and eventually escalated to charges of sexism on both sides -- and most recently, a battery of insults from Trump during a New Hampshire rally Monday night.

“I’m telling you this very strongly. First of all, she has committed a criminal act…. What she did with the emails was criminal,” Trump told supporters in Nashua, N.H. Summing up the Benghazi scandal, Trump charged that Clinton was “too lazy to answer phone calls.”

While Clinton for weeks has been able to quietly run her own campaign while watching Trump and other GOP candidates attack each other, Trump’s renewed focus on Clinton has brought her into the fray.

To an extent, the exchanges could be playing into Trump's master plan, by establishing him as Clinton’s chief rival.

Fox News contributor and syndicated columnist Charles Krauthammer said these attacks from the billionaire businessman are aimed at the Republican nominating process.

“By taking her on as the foil, he plays the presumptive Republican nominee,” Krauthammer said on Fox News’ “Special Report.” “He elevates himself above all the others. He’s been shooting at all the others for six months, and now he says 'I’m done, I’ve been able to knock ‘em all down'.”

Krauthammer said Trump is trying to prepare the country for him to be the GOP’s “standard-bearer.”

The dispute heated up recently after Trump said Clinton got “schlonged” by Obama in 2008. Clinton, in response, told a newspaper Trump has a “penchant for sexism.” Trump and his team then fired back at both Bill and Hillary Clinton, seizing on Clinton campaign plans to bring the former president out on the campaign trail starting next week.

Trump tweeted over the weekend: “Hillary Clinton has announced that she is letting her husband out to campaign but HE'S DEMONSTRATED A PENCHANT FOR SEXISM, so inappropriate!”

He tweeted overnight that “Bill Clinton was brought in to help Hillary against Obama in 2008. He was terrible, failed badly, and was called a racist!”

“Donald Trump's words are demeaning, his policies are just as destructive. Hillary Clinton will challenge Donald Trump and all the other Republicans who will rip away the progress we've made,” she said in the statement

In the fundraising message, she said: “It’s one thing for him to go after Hillary and Bill Clinton -- they can take it. It’s another thing for him to attack huge swaths of the American people and an entire religion, like women (whom he’s called "pigs" and "dogs"), Mexican immigrants (who he thinks are criminals and rapists), and Muslims, at a time when we need them to help fight ISIS and other extremists.”

While the Trump-Clinton clash could point to an effort by Trump to shed his GOP competition, Christopher C. Hull, president of D.C.-based public affairs firm Issue Management, Inc., downplayed any long-term strategy. He said the fight probably stems more from Clinton making the questionable claim in the last debate that ISIS was using videos of Trump statements to recruit.

Hull, author of “Grassroots Rules,” a book on presidential primary politics, called Trump an “equal opportunity critic” and suggested he’ll continue to take on both Clinton and his GOP rivals ahead of the Iowa caucuses.

A Rasmussen Reports poll showed 37 percent of likely voters would back Clinton, as opposed to 36 percent for Trump. The poll of 1,000 likely voters was conducted Dec. 22-23 and had a margin of error of 3 percentage points.

Still, other Republican candidates like Sens. Marco Rubio and Ted Cruz do slightly better in most head-to-head match-ups against Clinton. Trump is actively trying to battle the narrative that Clinton and the Democrats want to go up against Trump in the general election – and dismissed those claims during his New Hampshire rally on Monday.