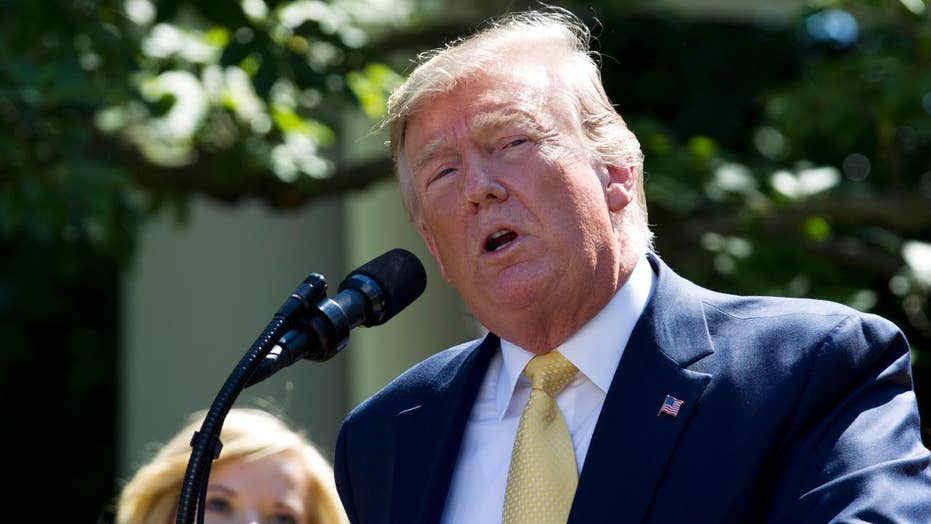 Says he might not call FBI on foreign dirt.

President Trump said Democrats could stop stonewalling over immigration and solve the issue with just a quick meeting, in remarks broadcast Sunday with ABC News’ "This Week" anchor George Stephanopoulos.

“The border should be done, George. The border... The Democrats should come in and 15 minutes to an hour we can have it all solved. It’s so simple,” the president said at the White House.

He added: “The things that we’re talking about you shouldn’t have to give. It’s so-- there are three and four loopholes you solve those loopholes you no longer have a problem at the border. They should want to do it. But they don’t want to do it because of political reasons.”

Mexico announced recently that it was sending 6,000 agents of its new, still-forming, militarized police force known as the National Guard to its southern region for immigration enforcement as part of a deal with Washington to avoid Trump’s threatened tariffs on Mexican imports.

The number of migrant apprehensions at the U.S.-Mexico border was 132,887 in May, the highest monthly total in a decade. Many making the hazardous journey have been trying to escape poverty and violence in Honduras, Guatemala and El Salvador, and the U.S. has been pushing Mexico to crack down.

However, House Speaker Nancy Pelosi took issue with Trump's threat to impose punishing tariffs, a threat that he sidelined earlier this month after further negotiations with Mexico.

“President Trump undermined America’s preeminent leadership role in the world by recklessly threatening to impose tariffs on our close friend and neighbor to the south... Threats and temper tantrums are no way to negotiate foreign policy,” Pelosi, D-Calif., said.

The ABC News interview made headlines on several fronts, with the network promoting Stephanopoulos' 30 hours he spent with Trump. Among other topics, the president said he would “want to hear” dirt on 2020 rivals from foreign governments.

Trump said he believed the situation at the border was connected to the recent successes of his administration.

“Well, that’s because the economy is so good, they try to come into our country. We have many more people wanting to come in and they come for economic reasons, they not coming for asylum,” he said.

He added: “Really, they’re coming though… most of them for economic reasons, and the country is doing better economically than ever before and everybody wants to crack in. I think we’ve done a great job on the border. We're apprehending more people than ever before under our new Mexico plan. That’s going to help a lot because, you know, you’re going to see the numbers go way down. But really we should be able to do it much easier than that. If the Democrats sat down for fifteen minutes we could work it out.”

Republicans have continued to blame Democrats for the border crisis.

Border apprehensions for 2019 are set to reach theit highest level since 2006 and double the number seen in 2018. According to one analysis by Princeton Policy Advisors, a group focusing on developing policy solutions to issues including illegal immigration, border apprehensions could reach a 13-year high of 913,000 for 2019.