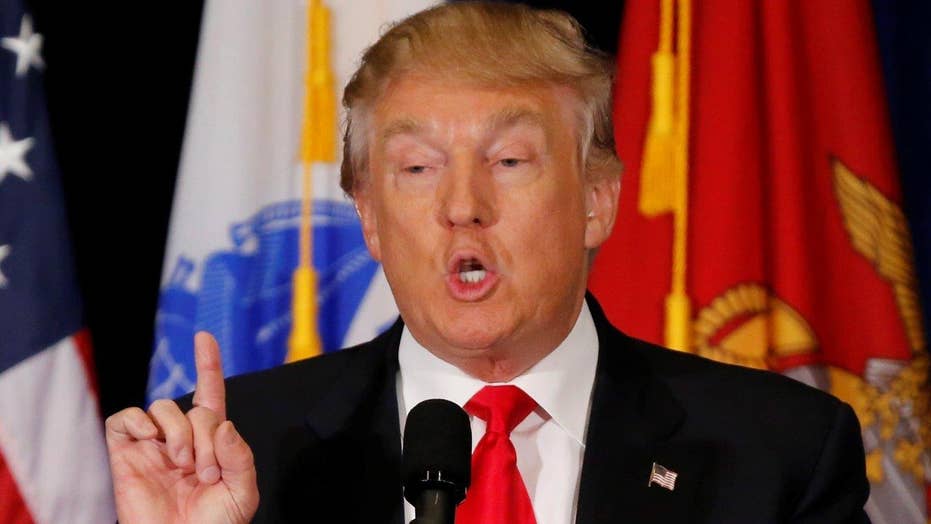 Donald Trump: I am the law and order candidate

Donald Trump, in the wake of last week’s deadly attack on Dallas police and a fresh wave of protests over police-involved shootings, voiced his full-throated support Monday for America’s law enforcement and declared himself the “law and order candidate.”

The presumptive Republican presidential nominee put himself foursquare behind police at a combustible time in the relationship between law enforcement and the communities they serve. Speaking at an address in Virginia Beach originally billed as a veterans policy speech, Trump opened by discussing the deep challenges police face.

“We will always stand with you,” Trump said.

He compared the atmosphere to the hostility veterans faced after the Vietnam War, and called for that “hostility” to “end immediately, right now.” He said inner-cities are “rife with crime” and efforts to curtail law enforcement are “hurting the poorest and most vulnerable Americans.”

He then used the issue to draw a distinction between him and his presumptive presidential rival.

“We must maintain law and order at the highest level or we will cease to have a country. … I am the law and order candidate,” Trump said. “Hillary Clinton, on the other hand, is weak, ineffective, pandering and as proven by her recent email scandal … she’s either a liar or grossly incompetent.”

Clinton -- who is looking to move beyond the email issue after the Justice Department decided not to pursue charges, and has defended her actions -- has voiced support as well for law enforcement in the wake of the Dallas murders.

She spoke with the Dallas mayor after the shooting last week, and on Friday said the country must not vilify police officers.

“What happened in Dallas, what's happening to other police officers in our country is absolutely outrageous,” she told PBS on Friday. “We have got to do much more to protect and respect the police.”

At the same time, she said, “We have to do much more to make sure that citizens in our country, particularly African-Americans, feel respected and protected by the police.”

The political arena has indeed been seized by a complex debate over law enforcement, crime and racial bias.

On one hand, the killing of black men by police officers has not only fueled movements like Black Lives Matter but brought the criminal justice debate to the fore of the congressional and presidential campaigns. New protests, including the one that preceded the Dallas shooting, broke out after two black men were killed last week by police in Louisiana and Minnesota.

At the same time, dozens of officers have been killed in the line of duty so far this year. The Dallas attack, in which five officers died, was the deadliest for law enforcement since 9/11. Taken together, the violence has fueled concerns that officers are not getting the support they need from their communities and political leaders.

Meanwhile, Trump was pushing his plan Monday for cracking down on Veterans Affairs employees who fail to serve veterans.

His 10-point plan would expand programs allowing veterans to seek government-funded private medical care. Trump also says he will fire or discipline VA employees who "fail our veterans" or breach the public trust.

Trump has been working to repair his relationship with veterans since he suggested early in his campaign that Sen. John McCain was not a war hero because he was captured during the Vietnam War.

Helping veterans, though, has long been a staple of Trump's campaign. And he hammered the Obama administration for the 2014 Veterans Affairs scandal over long wait times for veterans seeking medical care and falsified records by VA employees to cover up the delays.

The presumptive GOP nominee spoke in Virginia Beach, Va., not far from the USS Wisconsin in Norfolk, where he first unveiled his plan to reform the Department of Veterans Affairs last October. Then he promised to modernize the system, minimize wait times for patients and improve care.

"The current state of the Department of Veterans Affairs is absolutely unacceptable," read the plan that Trump unveiled last fall. "The guiding principle of the Trump plan is ensuring veterans have convenient access to the best quality care."