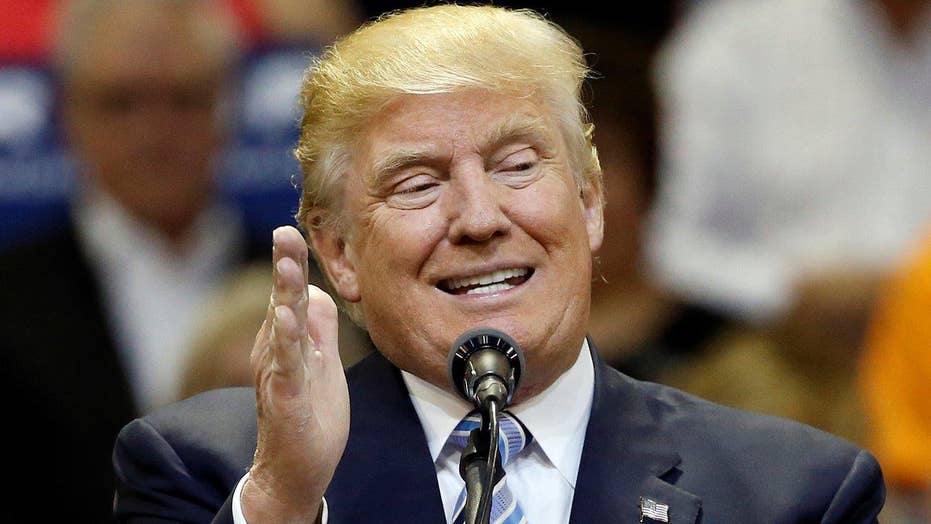 Donald Trump to speak at Faith and Freedom conference

Donald Trump and Hillary Clinton, now at the starting line of a general election race, traded shots across the capital Friday in dueling addresses before two very different D.C. audiences -- each warning the other would take the country backward.

Trump, looking to solidify his standing with evangelical Christians, offered assurances Friday that he would “restore respect for people of faith” -- and stressed the “sanctity and dignity of life.”

If there was any doubt he wanted to throw Clinton's Planned Parenthood speech into sharp relief, he took on his presumptive rival later in his remarks. Trump warned Clinton would "appoint radical judges," eliminate the Second Amendment, "restrict religious freedom with government mandates," and "push for federal funding of abortion on demand up until the moment of birth."

He also cast her support for bringing in Syrian refugees as a potential clash of faiths. "Hillary will bring hundreds of thousands of refugees, many of whom have hostile beliefs about people of different faiths and values," he said.

Clinton, meanwhile, in her first speech as the Democratic Party’s presumptive nominee, said a Trump presidency would take the country back to a time “when abortion was illegal … and life for too many women and girls was limited.”

Clinton made it clear that women’s issues would be a staple of her campaign, promising abortion rights supporters that she would “always have your back” if elected president.

Clinton repeated claims that Trump wants to “take America back to a time when women had less opportunity” and freedom.

“Well, Donald, those days are over. We are not going to let Donald Trump -- or anybody else -- turn back the clock,” she told the cheering crowd.

Before arriving at the event, Clinton held a private meeting at her D.C. home with Massachusetts Sen. Elizabeth Warren, who has been rumored to be a consideration for running mate.

Echoing some of the attacks Warren has made in recent days, Clinton attempted to elevate the importance of this election.

“We are in the middle of a concerted, persistent assault on women’s health across the country,” warned Clinton, who said the 2016 election was “profoundly different” than previous elections.

In what is a campaign trail staple of hers, Clinton highlighted Trump’s insults toward women and asserted that it would be “hard to imagine depending on him to defend the fundamental rights of women.”

Trump, meanwhile, continued calling Clinton, “crooked Hillary” and referred to her ongoing email scandal. He took her to task on her domestic and foreign policy stances.

Trump was interrupted by protesters at the annual gathering of evangelical Christians. The protesters shouted “Stop hate! Stop Trump!” and “refugees are welcome here.”

Trump called the chants “a little freedom of speech” but added it was also “a little rude, but what can you do?”