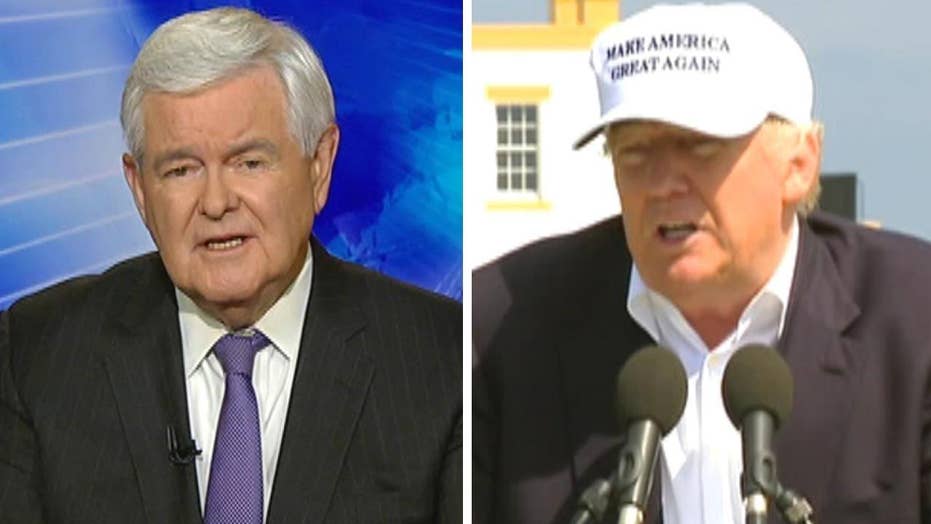 Trump: Speaking to the angst of Americans and Brits

Donald Trump saw some parallels between Americans frustrated with their government and British citizens who supported the UK leaving the European Union. Is he right? Newt Gingrich sounds off 'On the Record'

Donald Trump cast Britain’s decision to leave the European Union as a revolt against unfettered immigration into the West, as Thursday's vote emboldened both the billionaire’s anti-establishment bid for president and other break-away efforts across Europe.

From the Netherlands to France, political parties opposed to high immigration levels were demanding their own referendums on E.U. membership in the wake of the decision.

“We should have a referendum about a 'Nexit' as soon as possible,” Dutch politician Geert Wilders told Reuters, in reference to a proposed Netherlands exit.

France’s right-wing National Front party leader Marine Le Pen made a similar appeal on Twitter, while circulating a petition for France to vote on following the U.K. out the European Union door.

Both leaders, like Trump, have built a political brand railing against open border policies. After the “Brexit” vote, Trump claimed those sentiments were gaining steam on both sides of the Atlantic and even suggested the break-up of the European Union may loom.

“It looks like it's on it's way. We'll see what happens,” he said, speaking during a previously scheduled – but well-timed – visit to his golf resorts in Scotland.

Trump, unlike President Obama, backed the push for Britain to leave the union. On Friday, he pointed to frustration over policies “where people just flow across the border like Swiss cheese.”

He acknowledged trade deals and a desire for greater independence also played a role. Whether anti-immigration sentiment runs so deep as to portend a wave of similar referendums – and greater support in America for Trump than the polls currently reflect – remains to be seen. But Trump hammered the narrative Friday that the Britain result was a sign of the anger pulsing through the Western electorate.

For her part, presumptive Democratic presidential nominee Hillary Clinton suggested the vote should strengthen her appeal in the U.S.

“This time of uncertainty only underscores the need for calm, steady, experienced leadership in the White House to protect Americans' pocketbooks and livelihoods, to support our friends and allies, to stand up to our adversaries, and to defend our interests,” she said in a statement. “It also underscores the need for us to pull together to solve our challenges as a country, not tear each other down."

Obama and other U.S. officials tried to give assurances that the U.S.-U.K. alliance would endure amid the global and financial turmoil wrought by the vote.

Obama later said during remarks at a Palo Alto, Calif., summit that he has spoken with British Prime Minister David Cameron. Based on that call, he said, “I’m confident that the U.K. is committed to an orderly transition out of the E.U.”

While Obama and others in Washington openly joined Cameron – who now plans to resign – in opposing a “Brexit,” their voices were snubbed at the polls Thursday.

Vice President Biden, in Ireland, acknowledged the administration had looked for “a different outcome,” but stressed that the U.S. has a “longstanding friendship with the U.K.” and will respect the vote. He said that bond “runs deep and will endure.”

“I respect the decision made by the people of the United Kingdom. The U.K. is an indispensable ally of the United States, and that special relationship is unaffected by this vote,” he said in a statement.

Still, the outcome in Britain potentially sets up a domino effect of similar votes across Europe – testing the cohesion of the Western alliance.

Anti-immigration parties in Sweden and Denmark also are stepping up their push for reconsidering E.U. membership. And while some congressional voices in Washington are treading carefully in the wake of the U.K. vote, others are joining Trump in touting the outcome as a sign of the times.

Sen. Jeff Sessions, R-Ala., a Trump supporter and one of the most outspoken critics of U.S. immigration policy, hailed the referendum and said in a statement, “Brexit is a warning for America.”

“Too many politicians and pundits here in America have been woefully oblivious to, or in some cases complicit in, what is going on around us,” he said. “The failed European Union experiment, and Great Britain’s rejection of it, must serve as a wake-up call for all of us in America.”