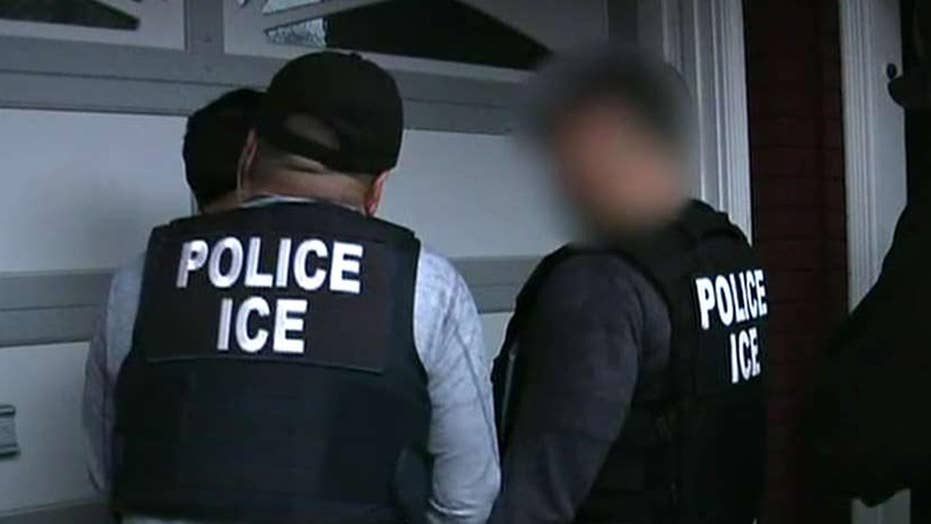 How will calls to abolish ICE impact law enforcement?

President Trump, in his weekly address, cited the 9/11 terror attacks as a reason to defend Immigration and Customs Enforcement (ICE) and to enforce immigration laws.

Trump has repeatedly backed ICE in the face of growing Democratic calls to abolish the agency, and has accused Democrats of wanting “open borders.” In the address, he took this a step further and said the the September 11 terror attacks were proof that enforcing immigration law makes America safer.

Several of the 9/11 terrorists overstayed their visas, and both the Department of Homeland Security and ICE were established after the recommendations from the 9/11 Commission.

But, in the wake of the controversy surrounding the separation of families at the border, the once-fringe call to abolish the agency has gone mainstream among Democrats.

"I believe that [Immigration and Customs Enforcement] has become a deportation force … and that's why I believe you should get rid of it, start over, reimagine it and build something that actually works," Sen. Kirsten GIllibrand, D-NY, said last month.

Trump has predicted electoral defeat for Democrats who embrace such a message, and has regularly defended ICE agents against the growing calls for the agency’s demise.

In his address, he said that immigration violations are “the practices exploited by terrorists, drug dealers, child smugglers, human traffickers, gang members and countless unknown and unregistered criminals to gain access to our country and threaten our citizens.” He then turned his ire on Democrats and accused them of wanting open borders with their calls to abolish the agency.

He went on to say that "without the brave heroes of ICE we would have no enforcement, no borders and therefore we wouldn't even have a country."

House Minority Leader Nancy Pelosi, D-Calif., also mentioned 9/11 this week in the context of the immigration debate, claiming that Republicans are actually weaker on the issue than Democrats because they did not implement some of the 9/11 Commission’s recommendations that concerned border security enforcement and immigration.