EXCLUSIVE: President Trump's campaign will unveil a new coalition on Wednesday focused on galvanizing Jewish voters ahead of the November election, Fox News has learned.

The "Jewish Voices for Trump" coalition will be co-chaired by Republican mega-donors Sheldon and Miriam Adelson, among other prominent  Jewish Americans.

The Coalition Advisory Board will work to underscore the Trump Administration’s commitment to supporting pro-Israel policies and empowering Jewish communities across the country, the Trump campaign said. 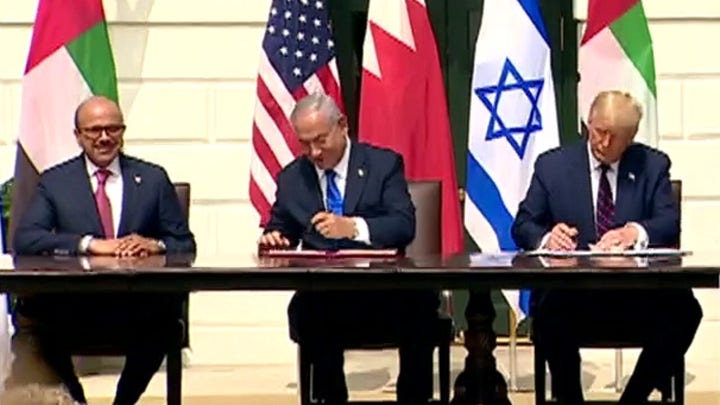 News of the coalition came hours after President Trump presided over the signing of two historic Middle East diplomatic deals between Israel and the United Arab Emirates, and Israel and Bahrain.

The deals involve the exchanging of ambassadors, establishment of embassies and cooperation on a range of fronts -- including trade, security and tourism. The agreements, known as the "Abraham Accords" also allow Muslims to visit Islamic holy sites in Israel. Trump said the deals would form "the foundation for a comprehensive peace across the entire region."

The new coalition will focus on Trump's ongoing commitment to normalizing relations in the region and protecting America’s interests abroad, as well as the president's effort to combat anti-Semitism in the United States, according to the campaign.

While Trump has seen a significant increase in support among Jewish voters since 2016, a new survey released this week found that 67% of Jewish American respondents plan to vote for Joe Biden in 2020, and only 30% for Trump.