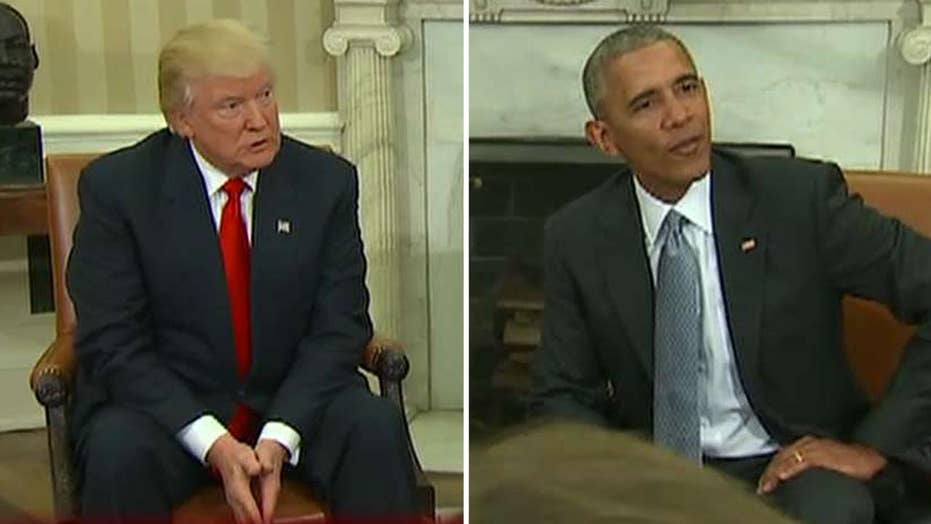 The White House on Sunday called for congressional investigations into its claims the Obama administration meddled in the 2016 election cycle in an attempt to gather information on then-Republican presidential nominee Donald Trump.

Who was it that secretly said to Russian President, "Tell Vladimir that after the election I'll have more flexibility?" @foxandfriends

“President Donald J. Trump is requesting that as part of their investigation into Russian activity, the congressional intelligence committees exercise their oversight authority to determine whether executive branch investigative powers were abused in 2016.”

The statement follows an explosive allegation Saturday by Trump that former President Obama ordered phones wiretapped at Trump Tower and also states that nobody in the administration “will comment further until such oversight is conducted.”

Trump’s wiretap allegations, in a series of tweets Saturday, and the ensuing White House statement are the latest developments in the ongoing story about Russia’s involvement in the 2016 presidential race -- particularly Russian President Vladimir Putin trying to influence the election for Trump over Democratic rival Hillary Clinton.

National Security Adviser Michael Flynn submitted his resignation over the matter, and Attorney General Jeff Sessions has recused himself from any Justice Department probe, following revelations he spoke during the campaign to Russian Ambassador Sergey Kislyak.

“Terrible! Just found out that Obama had my ‘wires tapped’ in Trump Tower just before the victory. Nothing found. This is McCarthyism,” Trump wrote in one tweet Saturday.

“Is it legal for a sitting president to be ‘wire tapping’ a race for president prior to an election? Turned down by court earlier. A NEW LOW!” he said in another tweet.

Trump also tweeted that a “good lawyer could make a great case of the fact that President Obama was tapping my phones in October, just prior to election!”

“How low has President Obama gone to tap (sic) my phones during the very sacred election process. This is Nixon/Watergate. Bad (or sick) guy!” the president continued.

Obama on Saturday denied Trump’s accusation that Obama had Trump Tower phones tapped in the weeks before the November 2016 election.

“Neither President Obama nor any White House official ever ordered surveillance on any U.S. citizen. Any suggestion otherwise is simply false," said Kevin Lewis, a spokesman for the former president.

Trump seems to be making the allegations based on a Breitbart News article Friday and recent claims by conservative radio host Mark Levin that the Obama administration made Foreign Intelligence Surveillance Court (FISA) requests in 2016 to monitor Trump communications and a computer server in Trump Tower, related to possible links with Russian banks.

On Sunday, Trump resumed his attack that Obama colluded with Russia.

“Who was it that secretly said to Russian president, ‘Tell Vladimir that after the election I'll have more flexibility?"' tweeted Trump, referring to what Obama was overheard telling then-Russian President Dmitry Medvedev in March 2012.

Trump also tweeted earlier: “Is it true the DNC would not allow the FBI access to check server or other equipment after learning it was hacked? Can that be possible?'