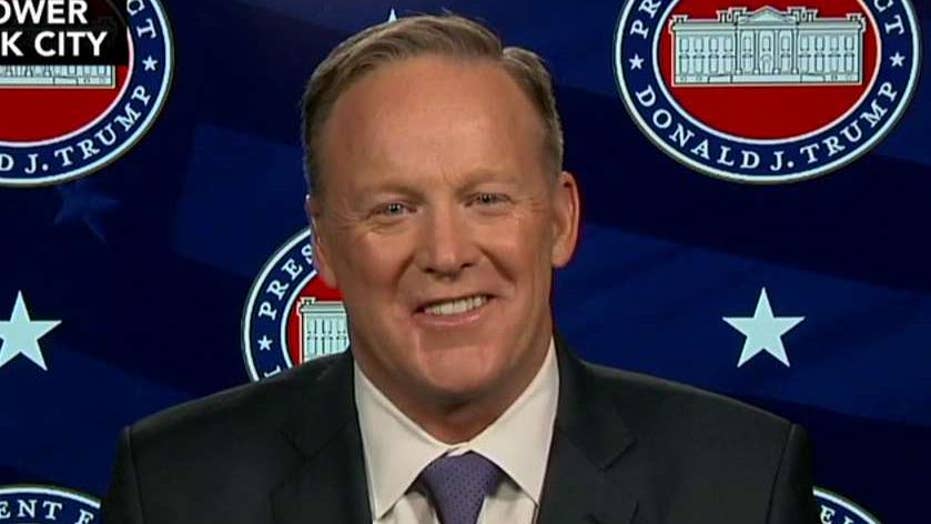 Sean Spicer on the fireworks between President-elect Trump and CNN reporter, his response to unsubstantiated reports of damaging ties with Russia and more

At a feisty news conference packed with big announcements, President-elect Donald Trump blasted the media and even the intelligence community Wednesday for “disgraceful” reports about Moscow’s supposed dirt on him – while unveiling a sweeping plan to separate himself from his business empire.

Trump also unveiled his pick for Veterans Affairs Department secretary, vowed to roll out a plan soon to repeal and replace ObamaCare and reiterated his intent to build a border wall.

But he was most animated while rebutting reports that the Russians may have compromising information about him.

Calling the claims “nonsense,” he questioned whether the intelligence community leaked the information. He said it would be a “tremendous blot on their record” if they did and stood by a tweet likening the leak to the tactics of Nazi Germany.

“That’s something that Nazi Germany would have done, and did do,” he said.

Trump said the reports should never have been written, while praising others in the media for their restraint. “I’ve just gone up a notch as to what I think of you,” he quipped.

He later sparred with a reporter from CNN, which along with BuzzFeed first reported on the claims -- though BuzzFeed published the more salacious details.

The crux of the press conference, however, was an announcement from his team about his plans for The Trump Organization -- which now includes handing control of the global company bearing his name to sons Donald Jr. and Eric Trump, along with chief financial officer Allen Weisselberg.

Trump also plans to resign all offices and positions in his companies, and place his assets and investments in a trust. According to an attorney who spoke at the press conference, daughter Ivanka – whose husband Jared Kushner has accepted a senior adviser job in the White House – will relinquish all management authority as well.

Further, the Trump team announced the organization will donate all profits from foreign government stays at Trump hotels and properties to the U.S. Treasury, and bar foreign deals during his presidency.

The transition team also made clear Trump will not fully divest himself from his business interests, even as he cedes control of the operation. An attorney for The Trump Organization said it was “not realistic” to do so. And Trump plans to retain an ownership interest in the Old Post Office in Washington, D.C., where his new hotel opened last year.

The press conference tackled numerous hot-button topics, from ObamaCare to immigration to his Cabinet.

Addressing one of the few unfilled positions, Trump announced he has chosen David Shulkin to lead the VA. He currently is under secretary for health in the Veterans Affairs Department under the Obama administration.

On the Affordable Care Act, Trump played down deliberations among fellow Republicans about how to proceed on the repeal effort. Without offering specifics, he said his team would submit a plan to repeal and replace the law “almost simultaneously” – “most likely … on the same day or the same week … could be the same hour.”

Trump argued the Republicans would actually be doing Democrats a favor.

“ObamaCare is the Democrats’ problem. We’re going to take the problem off the shelves for them. We’re doing them a tremendous service by doing it,” he said.

The press conference comes at a busy – and tumultuous – time for the president-elect’s transition team. At the same time Trump is finalizing his Cabinet nominations and trying to get them confirmed and in place for the start of his administration, he continues to grapple with reports about Russian interference during the 2016 presidential campaign.

He was briefed last week on intelligence community findings about Russian hacking and other meddling during the campaign that allegedly included the breach and leak of emails from Democratic official accounts. But the story took a salacious turn overnight when it was reported that Trump and President Obama also were briefed on an unverified report Russia had compromising personal and financial information on him.

Both Moscow and the Trump team have vehemently denied the allegations. Trump, further, turned fire on the intelligence community Wednesday morning and blamed them for leaking the details.

“It’s frankly outrageous and highly irresponsible for a left-wing blog … to drop highly salacious and flat-out false information on the Internet just days before he takes the oath of office,” he said, referring to BuzzFeed. “The fact that BuzzFeed and CNN made the decision to run with this unsubstantiated claim is a sad and pathetic attempt to get clicks.”