Trump hammers Democrats for pushing obstruction narrative; reaction and analysis on 'The Five.'

President Trump has blamed predecessor Barack Obama for a litany of issues, from the Iran nuclear deal to the crisis at the border, and on Friday he added the alleged poor state of air conditioning in the White House to that list.

Trump made the remarks to reporters in the Oval Office, when discussing how he was going to his residence in Bedminster, N.J. in August. He said that such trips aren’t a vacation and that presidential away days are often used for maintenance on the White House.

“I'd rather be right here,” he said, before adding that “a lot of times you go and they do a lot of work in the White House.”

“For instance, the Obama administration worked out a brand new air conditioning system for the West Wing and it was so good before they did the system,” he said.

“Now that they did this system it's freezing or hot in here,” he complained 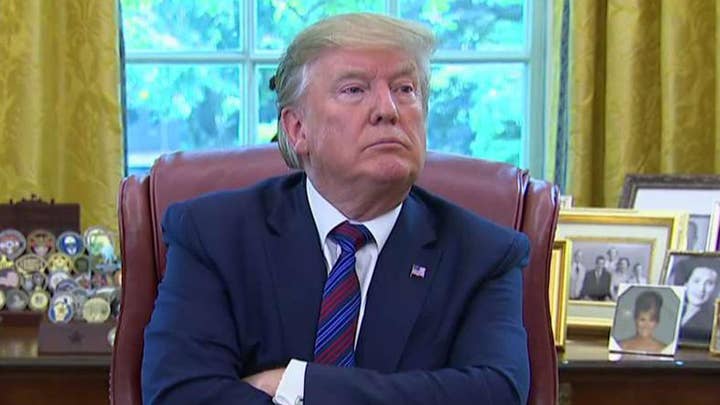 It’s common for presidents to blame their predecessors for problems plaguing the country, but this might be the first time the climate in the White House has been brought up by a presidential successor.

Trump mentioned Obama a few times during the lengthy back-and-forth with reporters. He said that now the U.S. has “a much better economy than in his wildest dreams.”

In relation to the Russia investigation and this week’s hearing involving former FBI Special Counsel Robert Mueller, he mentioned Obama’s book deal as something investigators should look into in response to what he called Democrats’ “fishing.”

“It's a disgrace. We want to find out what happened with the last Democrat president. Let's look into Obama the way they've looked at me from day one,” he said. “They've looked into everything that we've done.”

“They could look into the book deal that President Obama made. Let's subpoena all of his records,” he said.