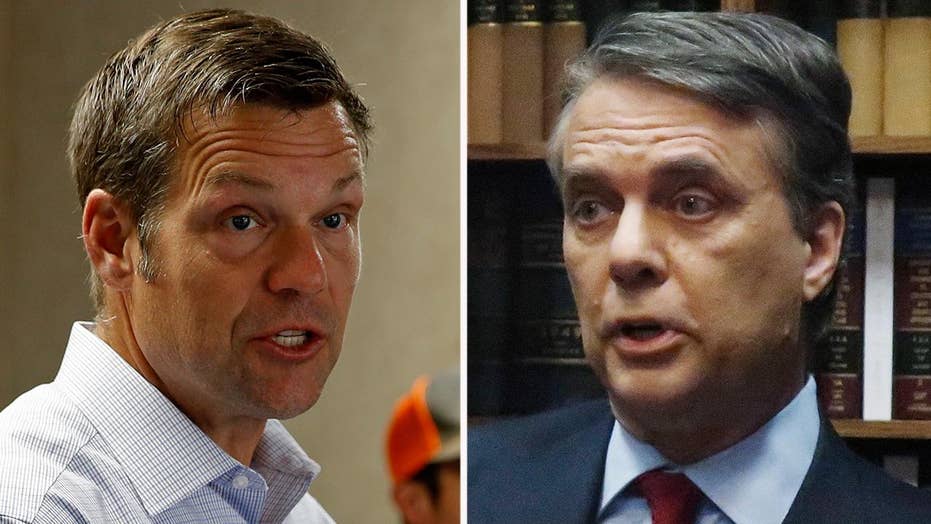 Candidate Kris Kobah, who was endorsed by president Trump, holds a narrow lead; Dan Springer reports on the race.

Kansas Secretary of State Kris Kobach claimed a "tentative victory" on Wednesday as unofficial results showed him leading by a razor-thin margin in his state’s Republican gubernatorial primary.

But Colyer hasn’t been ousted yet. His campaign put out a statement saying the race is too close to call, and noted that provisional ballots still need to be counted.

During a press conference in Topeka, Kobach acknowledged the results could change but said he needs to start running a general election campaign anyway.

"It is certainly possible the result of the race could change," Kobach said. "The Republican Party must not stand still, and we must run the race before us."

He added, "This is a tentative victory, and I am carrying the baton with the full knowledge that I may hand the baton to Jeff. ... We have to begin running right now because our opponents have already started running."

The secretary of state’s office, which handles the vote tally, also noted on Twitter that the results are unofficial, and provisional as well as some hand-counted paper ballots are not yet included.

Results will be considered official after a state canvass; even then, there could be legal challenges.

Kobach, an immigration hardliner and controversial figure nationally, climbed to the top of the field after receiving a glowing endorsement on Twitter from President Trump, who referred to Kobach as a "fantastic guy" who would "be a GREAT Governor."

But Kobach was an early supporter of Trump's candidacy and the former chair of the president's now-shuttered federal commission on voter fraud. He is best-known nationally for his tough stance on illegal immigration and for advising the Trump administration on immigration, non-citizen voter registration and the 2020 Census.

No state had gone further than Kansas in requiring prospective voters to provide papers documenting their U.S. citizenship when registering, until a federal judge struck down the law in June as a violation of voting rights.

If Kobach’s lead holds, it’s unclear whether his presence on the ballot could energize Democratic turnout in the fall and jeopardize Republicans’ hold on the seat.

The state's Democratic nomination went to state Sen. Laura Kelly, who defeated four other candidates in the primary. The 68-year-old has served 14 years in the Kansas Senate and is the top Democrat on the budget committee.

Kansas’ contest wasn’t the only airtight race Tuesday night. A winner has still not officially been called in the Ohio special election for a vacant GOP-held seat. But Republican state Sen. Troy Balderson claimed victory – and he appeared to be inching closer to beating back a challenge by insurgent Democrat Danny O’Connor.

A victory in the race for Ohio's historically conservative 12th Congressional District would deny Democrats the major upset they had sought ahead of the November midterm elections. The winner takes the seat previously held by Republican Pat Tiberi, who resigned in January to take another job.

Speaking to cheering supporters Tuesday night, Balderson said O'Connor ran a "hard race" and claimed victory. And in a tweet Tuesday night, Trump wrote that Balderson had won a "great victory during a very tough time of the year for voting."

Fox News’ Gregg Re, Adam Shaw and Kelly Burke and The Associated Press contributed to this report.