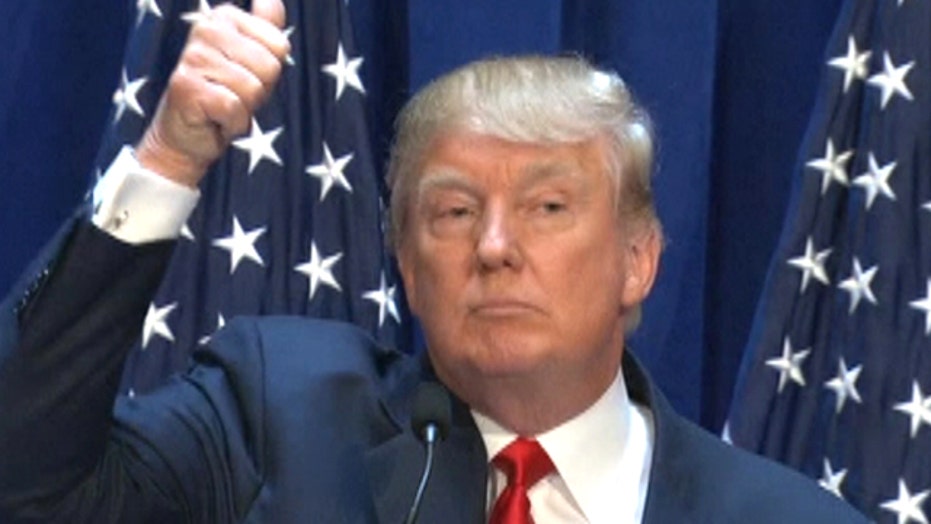 Trump: 'I am officially running for president'

New York real estate mogul and reality TV star Donald Trump on Tuesday declared himself a candidate for the Republican nomination for president, launching his against-the-odds campaign after teasing one for years.

“I am officially running for president of the United States,” he said from inside his signature Trump Tower in midtown Manhattan. “We are going to make our country great again.”

In a strong pro-business, pro-military speech, the unabashed Trump vowed to stop the Islamic State, keep Iran from building a nuclear weapon, repeal ObamaCare, build a wall along the U.S.-Mexico border, repeal President Obama’s executive orders on immigration and spend more on infrastructure.

“Nobody could be tougher on ISIS than Donald Trump,” he said in a roughly 45-minute speech, peppered with occasional, off-the-cuff remarks.

"I'm really rich," Trump said while waving a financial statement that showed his net worth at nearly $9 billion. “And that’s not bragging. That’s the kind of mindset you need.”

Though he faces an uphill challenge in trying to win the GOP nomination, the 69-year-old Trump adds an undeniable element of surprise to the race.

He joins the field of 11 other GOP candidates, with Wisconsin Gov. Scott Walker expected to enter the race in mid-July and several other hopefuls still considering. Former Florida Gov. Jeb Bush announced his bid a day earlier.

And he could be an aggressive -- and interesting -- player on the primary debate stage, should he stay among the top-10 candidates in the polls.

On Tuesday, Trump unapologetically criticized candidates, politicians and others.

He also blasted China for "killing us" in the world economy; ripped fellow Republican candidates for not talking enough about China; called alleged Army deserter Sgt. Bowe Bergdahl a "no-good traitor" and even plugged his golf courses.

"I have the best courses in the world," Trump said, in an aside offering to host Obama at one of them.

Despite pulling back in 2012, Trump had for months shown signs that he intended to get into the White House race this time.

He formed a presidential exploratory committee and made numerous visits this year to early-voting states Iowa, New Hampshire and South Carolina. Also, he was consistently competitive in early polling.

Trump’s business success will likely position him as a candidate riding a strong free-market, pro-business platform. It would also set him apart from candidates pitching a populist message and trying to make themselves relatable to middle-class voters.

“This is going to be an election, in my opinion, based on competence,” Trump said. “The American Dream is dead. And if elected president, I will make it bigger and stronger than ever.”

Trump, who was born in Queens, inherited his father’s successful real estate company in 1972 and has since grown and diversified the business to include Trump Entertainment Resorts as well as a clothing and fragrance line.

Trump’s extravagant lifestyle and brash manner is frequently on display during episodes of his long-running NBC TV show, “The Apprentice," and later "The Celebrity Apprentice," which the network in February approved for another season. NBC said in a statement Tuesday they would "re-evaluate Trump's role as host of 'Celebrity Apprentice' should it become necessary, as we are committed to this franchise."

Trump, popularly known as “the Donald,” married for the third time in 2005 and has a total five children and seven grandchildren. He attended the University of Pennsylvania’s Wharton School of Business.