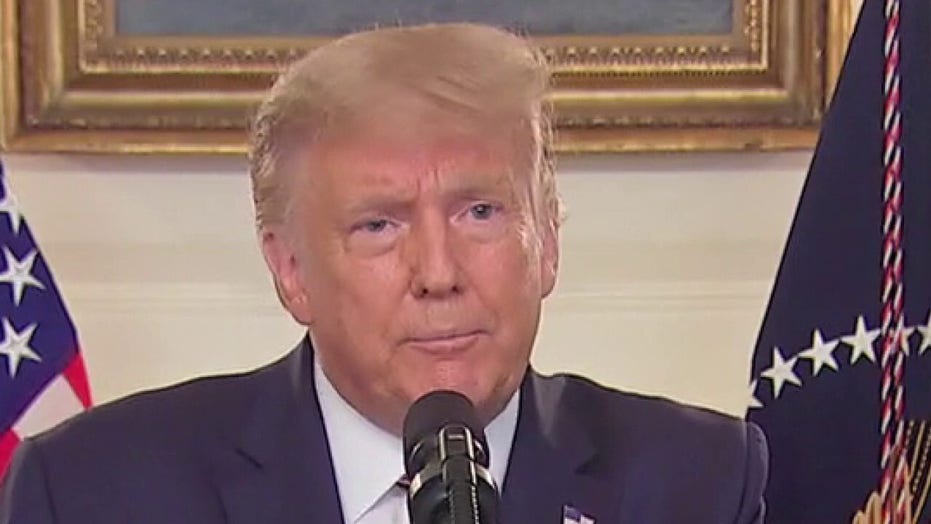 Trump says the new candidates would be jurors in the mold of justices Antonin Scalia, Clarence Thomas and Samuel Alito.

President Trump on Wednesday announced a list of 20 more people he would consider nominating to the Supreme Court, including three sitting Republican senators.

Speaking from the Diplomatic Reception room of the White House, the president read off a list of names including Daniel Cameron, the Kentucky attorney general who recently spoke at the Republican Convention, as well as Sens. Ted Cruz of Texas, Tom Cotton of Arkansas and Josh Hawley of Missouri.

The president said the 20 new names are being added to his previous list of 25 judges.

At the same time, Trump used the announcement to hit his opponent for not releasing his own list of potential nominees. He said Joe Biden had not released names because "they are so far left [they] could never withstand scrutiny."

He called on the former vice president to name who he might nominate to the court, saying it is "very important that he do so." Trump also warned of the consequences to the court if Democrats win the presidency.

"Unfortunately, there is a growing radical left movement that rejects the principle of equal treatment under the law," he said. "If this extreme movement is granted a majority on the Supreme Court, it will fundamentally transform America without a single vote of Congress."

"Radical justices will erase the Second Amendment, silence political speech and require taxpayers to fund extremely late-term abortion," he said. "It will give unelected bureaucrats the power to destroy millions of American jobs. They will remove the words under God from the Pledge of Allegiance. They will unilaterally declare the death penalty unconstitutional, even for the most depraved mass murderers."

After the announcement, Hawley thanked the president but tweeted that he has declined a potential nomination.

"I appreciate the President’s confidence in listing me as a potential Supreme Court nominee," he wrote on Twitter. "But as I told the President, Missourians elected me to fight for them in the Senate, and I have no interest in the high court. I look forward to confirming constitutional conservatives."

Cotton said he was honored to be considered. Moments before he was announced on the list, he tweeted: "It's time for Roe v. Wade to go."

"The Supreme Court could use some more justices who understand the difference between applying the law and making the law, which the Court does when it invents a right to an abortion, infringes on religious freedom, and erodes the Second Amendment," the Arkansas senator said in a statement.

Cruz also said it was an "immense honor" to be considered for the role.

"It's humbling and an immense honor to be considered for the Supreme Court," the Texas Republican said in a statement. "The High Court plays a unique role in defending our Constitution, and there is no greater responsibility in public service than to support and defend the Constitution of the United States."

The latest iteration of the list is the first update since November 2017 and comes less than two months before the presidential election. The list was first released in the later stages of the 2016 Republican presidential primary after then-rival Ted Cruz had dropped out of the race. It was aimed at reassuring conservatives suspicious of Trump that he would make Supreme Court picks in line with their priorities -- the newest version has the same fundamental purpose.

According to Senate Majority Leader Mitch McConnell, R-Ky., it worked in 2016.

"Here is a guy who is about to become our nominee who was doing fundraisers for Chuck Schumer four years ago," McConnell said at The Federalist Society's 2019 Kentucky Chapters Conference. "So there were a lot of us saying, 'What are we getting here?' And the list reassured a whole lot of Republicans, beginning with Republican U.S. senators."

He added: "Fast forward a little further and by the fall, the single biggest issue that brought nine out of 10 Republican voters home to Donald Trump, just like nine out of 10 voted for Mitt Romney, was the Supreme Court."

This list is the first one produced without the direct involvement of former White House Counsel Don McGahn, who was the driving force behind the confirmations of Justices Neil Gorsuch and Brett Kavanaugh. McGahn was involved with Trump's campaign from the early stages and is seen as one of the most influential people on the Trump administration's judicial selection process along with Federalist Society Co-Chairman Leonard Leo.

McGahn's fingerprint is still on the most recent list, however, as Trump, with McGahn’s involvement, nominated dozens of judges in his first term to circuit courts of appeals, which is where most Supreme Court nominees have come from in recent decades.

"President Trump has a great problem to have," McGahn said in an interview with Fox News earlier this summer. "He has nominated and appointed a slew of excellent jurists to the circuit courts. Thus, he already has a public list: the people he put on the circuit courts."

The list released Wednesday was kept under wraps right up until it went public, with the group of people involved in formulating it including Leo, current White House Counsel Pat Cipollone and Judicial Crisis Network President Carrie Severino, a former clerk for Justice Clarence Thomas.

Severino told Fox News earlier this summer that she expects Trump's Supreme Court list to be a major factor in the upcoming election.

"Twenty-one percent of voters said that the Supreme Court was their number one issue. That's more than a fifth of the voters. So it was hugely significant," she said.

Justice Ruth Bader Ginsburg is 87; Justice Stephen Breyer is 82; Thomas is 72; and Justice Samuel Alito is 70.

Conservatives were pleased with the president's announcement.

"President Trump continues to keep his promise to prioritize the appointment of judges while Joe Biden continues to duck the issue and hide his list," Severino wrote on Twitter.

Democrats decried Trump's inclusion of a number of conservative heavyweights on the list.

"Usually with these shortlists, the names are obscure and while you can intuit their views on guns, abortion and the ACA, it's subtext rather than text," Brian Fallon, former Hillary Clinton aide and director of Demand Justice, wrote on Twitter. "By including likes of Cruz and Hawley on the list, Trump is putting it in neon lights what another Trump justice will mean."

But the Trump team defended including three sitting senators. Counsel to the president Jay Sekulow said "there is precedent for this."

"The three senators are constitutionalists, several of them have clerked for former chief justice, tremendous constitutional experience," Sekulow said in a call with reporters. "I think it is good to have a variety of different backgrounds represented. Not everyone on the Supreme Court needs to be a judge. By having senators, it opens up to a broader swath of opinions and views and I think that's a healthy thing."

White House Press Secretary Kayleigh McEnany said in a statement, “President Trump’s list of potential Supreme Court nominees demonstrates his commitment to appointing originalists, who will abide by the Constitution, and textualists, who will implement the plain meaning of statutes. They will uphold the rule of law and ensure that America continues to shine as a beacon of freedom and justice around the world.”