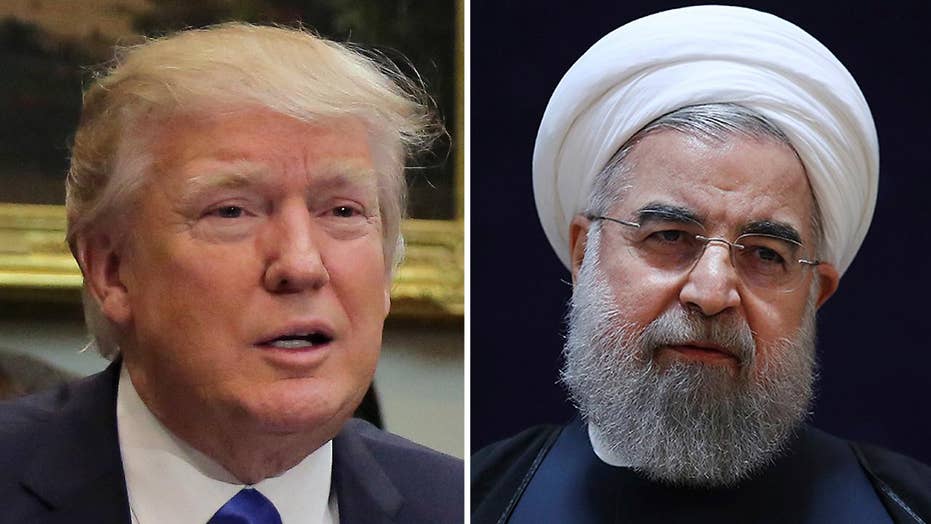 The Trump administration imposed new sanctions Friday on nearly two-dozen individuals and companies in response to Iran’s recent missile tests, quickly moving to increase the pressure on the regime after putting Tehran “on notice” earlier this week.

The U.S. Navy also moved a destroyer into position off the coast of Yemen, amid deep concerns over Iran’s support for Shiite rebels there who recently attacked a Saudi naval vessel.

"Iran's continued support for terrorism and development of its ballistic missile program poses a threat to the region, to our partners worldwide and to the United States," John E. Smith, the Treasury Department's acting sanctions chief, said in a statement.

Those targeted include various agents, companies and associates involved in procuring ballistic missile technology for Iran. The named Iranian, Lebanese, Chinese and Emirati individuals and companies also are now blacklisted from doing any business in the United States or with American citizens.

The president’s national security team had previewed possible action earlier in the week, with National Security Adviser Michael Flynn saying Iran was “on notice” and Trump warning Friday morning on Twitter that Iran was “playing with fire” with its recent actions.

The sanctions, coming in the first weeks of Trump's term, reflect his administration's desire to take a strong stance toward Iran from the start. Throughout his campaign, Trump accused the Obama administration of being insufficiently tough on Iran and vowed to crack down if elected.

The move won praise from Republican allies in Congress.

“This announcement makes clear that it is a new day in U.S.-Iran relations and that we will no longer tolerate Iran’s destabilizing behavior,” Senate Foreign Relations Committee Chairman  Bob Corker, R-Tenn., said in a statement. “A coordinated, multi-faceted effort to pushback against a range of illicit Iranian behavior is long overdue.”

Trump’s team stepped up its approach toward Iran in the wake of ballistic missile tests and the recent attack on a Saudi naval vessel by Tehran-backed militants in Yemen.

Military officials told Fox News that Iran has conducted two recent missile tests, one on Dec. 6 and another this past Sunday.

Meanwhile, a defense official told Fox News that the USS Cole, the same warship attacked in Yemen in 2000, is now patrolling off the coast of that country in the Gulf of Aden.

A senior administration official said they are prepared for further sanctions against Iran.

None of the new sanctions announced Friday appear to reverse the Obama administration's suspension of sanctions as part of the 2015 nuclear deal.

Nevertheless, the action will almost surely increase tensions with Iran.

The Islamic republic has insisted that new sanctions violate the deal and that it has the right to conduct ballistic missile tests now that its nuclear program has been sharply curtailed. The U.S. and Western countries argue otherwise, noting that Tehran agreed to an eight-year extension of a ban on ballistic work in nuclear negotiations two years ago. That agreement was concluded in parallel, but separately to the nuclear accord.

Shortly before Friday’s announcement, Iranian Foreign Minister Javad Zarif defended his country’s actions, saying on Twitter: “Iran unmoved by threats as we derive security from our people. We'll never initiate war, but we can only rely on our own means of defense.”

Mark Dubowitz, CEO of the Foundation for Defense of Democracies and a critic of the Iran deal, praised Friday’s announcement as a “good start” but warned the “procurement networks” targeted could be reconstituted.

“The Trump administration should adopt ideas promoted by Congress that sanction key nodes of Iran's economy and the international companies involved in supporting Tehran's missile program. Unless the Iranian regime pays a severe price for its malign activities, they are unlikely to stop,” he said in a statement.