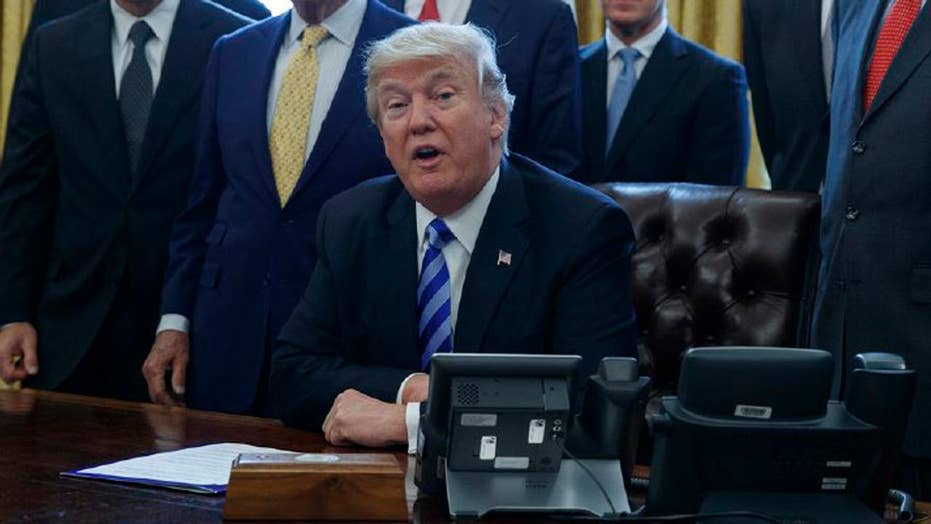 President Trump has gone back to the drawing board on tax reform as he looks for wide-ranging Republican support behind legislation to overhaul the tax system.

A White House official told Fox Business Network that all options are still on the table. However, a detailed tax plan is still weeks away.

A complete tax overhaul will likely miss the August deadline set by Treasury Secretary Mnuchin. The White House is trying to learn from the failure of enacting a new health care law to replace ObamaCare and take a more active role in getting legislation passed.

White House aides told The Associated Press Monday that the goal is to cut tax rates sharply enough to improve the economic picture in rural and industrial areas of the U.S. However, the administration so far has swatted down alternative ways for raising revenues, such as a carbon tax, to offset lower rates.

Trump has not said which trade-offs he might accept and had remained noncommittal on the leading blueprint for reform from Rep. Kevin Brady, R-Texas, the chairman of the Ways and Means Committee.

Brady has proposed a border adjustment system, which would eliminate corporate deductions on imports, to raise $1 trillion over 10 years that could fund lower corporate tax rates.

But that possibility has rankled retailers who say it would lead to higher prices and threaten millions of jobs, while some lawmakers have worried that the system would violate World Trade Organization rules.

Brady has said he intends to amend the blueprint but has not spelled out how he would do so.

Another option being floated around on Capitol Hill would change the House GOP plan to eliminate much of the payroll tax and cut corporate tax rates and possibly requiring a new dedicated funding source for Social Security.

The change, proposed by a GOP lobbyist with close ties to the Trump administration, would transform Brady's plan on imports into something closer to a value-added tax by also eliminating the deduction of labor expenses. This would bring it in line with WTO rules and generate an additional $12 trillion over 10 years, according to budget estimates. Those additional revenues could then enable the end of the 12.4 percent payroll tax, split evenly between employers and employees, that funds Social Security, while keeping the health insurance payroll tax in place.

This approach would give a worker earning $60,000 a year an additional $3,720 in take-home pay, a possible win that lawmakers could highlight back in their districts even though it would involve changing the funding mechanism for Social Security, according to the lobbyist.

Sen. Rob Portman, R-Ohio, a member of the Senate Finance Committee, said that all of the trial balloons surfacing in public don't represent the work that's being done behind the scenes.

The White House has not officially commented on any plan, but said in a statement but said a value-added tax based on consumption is not under consideration "as of now.”

Fox Business Network's Blake Burman and The Associated Press contributed to this report.