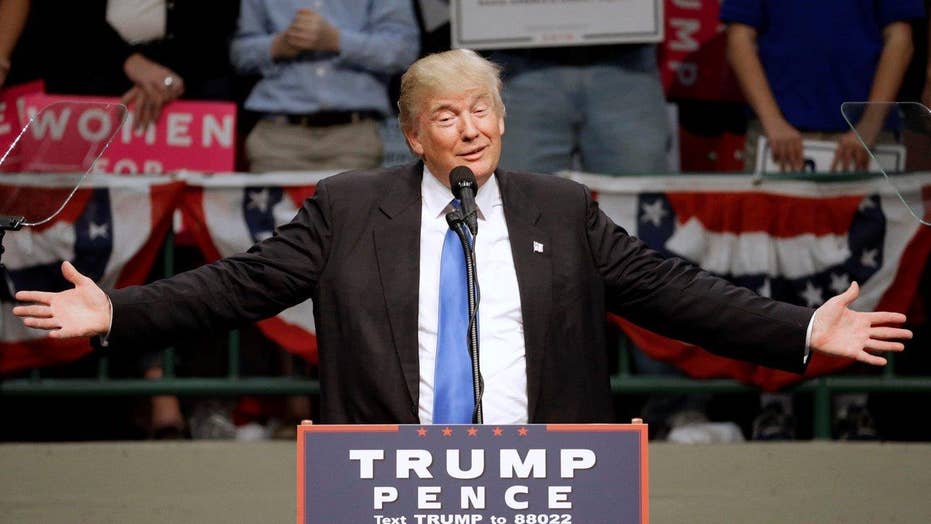 The GOP nominee counseled himself not to blow the ultimate push; Carl Cameron reports for 'Special Report'

North Carolina's 15 electoral votes have emerged as a key part of Trump's path to victory. A Quinnipiac University poll released Wednesday showed Clinton and Trump in a close race among North Carolina voters.

The real estate mogul told the crowd that "we know Hillary can't be trusted" with national security, a reference to the ongoing FBI investigation of Clinton's private email server, and called the former secretary of state "the most dishonest person ever to run for office."

"When I look at these great admirals and great generals ... behind me, to think of her being their boss? I don't think so," Trump said, adding that such "incredible patriots ... would never say a thing" about Clinton "but I know what they're thinking."

Approximately 30 miles to the northwest in Raleigh, Clinton was addressing a rally to boost early voting turnout, especially among African-Americans. She was joined by her former primary rival, Vermont Sen. Bernie Sanders, and hip-hop producer Pharrell Williams.

Clinton decried what she called the "distressful" tone of the campaign, saying that "I've had people say that they can't sleep, their stomachs are bothering them, they have headaches."

Clinton then pivoted to an attack on Trump, saying that his past reported comments about women, the disabled, Muslims and other groups have "already revealed who he is."

She discussed Trump's conduct in the now-infamous 1989 "Central Park Five" rape case, in which five black and Latino teens were convicted of sexual assault before later being exonerated. Last month, Trump said the teens "admitted they were guilty."

"If he wants to keep exonerated people in jail, how can he fight for fairness and justice?" Clinton asked. "Do we want him appointing our judges? Do we want him controlling the Justice Department?"

President Barack Obama became the first Democratic presidential candidate to win North Carolina in 32 years when he took the state in 2008. Republican Mitt Romney won it back in 2012.