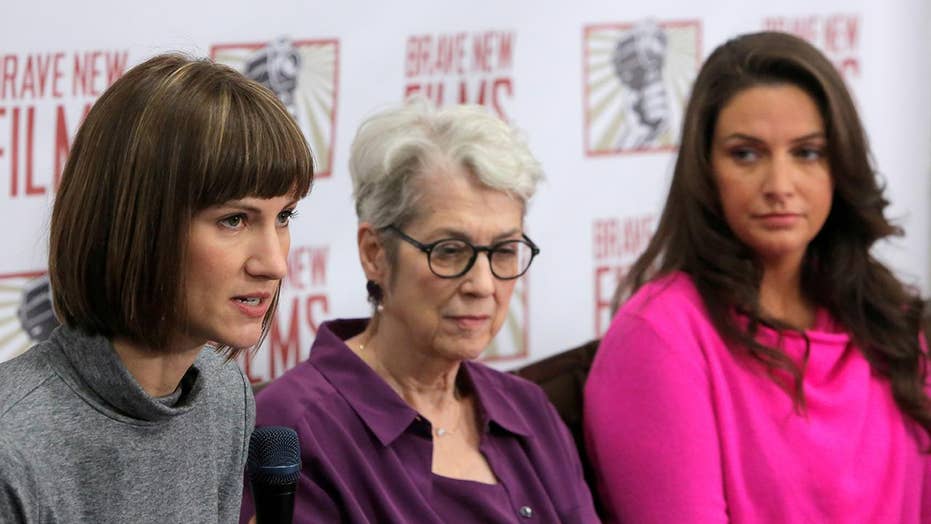 Raw video: Women who have publically accused the president of sexual harassment and assault speak about their experiences.

Three women, who previously have accused President Trump of sexual misconduct, banded together Monday to call for a congressional investigation into the president – in what could be an opening effort to shift the sexual harassment spotlight from Congress to the White House.

The women revived their allegations during a press conference and television interview in New York City.

Trump has long rejected the accusations from over a dozen women who have made such claims against him, and the White House called the revived accusations "false." The three accusers spoke out Monday following high-profile resignations last week on Capitol Hill over misconduct claims.

“I ask Congress to put aside their party affiliations and ask that they investigate Trump’s history of sexual misconduct,” Rachel Crooks said during a press conference in New York City Monday. "If they were willing to investigate Senator Franken, I think it's only fair that they do the same for Trump."

“In terms of resigning, it’s probably the right thing to do. But I can’t imagine he will. I think the congressional investigation is the only thing we can ask for," Crooks said.

The women attracted some congressional attention. Sen. Kirsten Gillibrand, D-N.Y., who helped lead calls for Franken to step down, on Monday told CNN that Trump, too, “should resign” – calling the women’s claims “credible.”

Crooks gave a detailed account of her story, accusing Trump of kissing her on the lips when she was a receptionist at a company in Trump Tower when she was 22 years old.

“I was shocked. Devastated. It happened so fast,” Crooks said earlier Monday on NBC’s “Megyn Kelly Today.” “I wish I would have been courageous enough to be like ‘what’s going on,’ and ‘you need to stop.’…I felt horrible.”

Two other women shared their stories during the press conference and on the same program.

Jessica Leeds, who first told her story during the presidential campaign, detailed her experience on an airplane in the 1970s. Leeds said she was on a flight, and was moved to first class—a seat next to Trump.

She claimed Trump started "kissing and groping" her, and that she eventually moved to the back of the plane.

"Mr. Trump, he was bored and wanted some entertainment," she said at the press conference. Leeds said that years later, she ran into Trump in New York City, where she claimed he remembered her and called her a derogatory name.

Samantha Holvey, a former Miss USA pageant contestant, alleged that during one pageant, Trump came backstage to where the contestants were in hair and make-up in bathrobes.

“He lined us up, and I thought this was going to be like a meet and greet, like ‘hi, how are ya, nice to meet you,’ it was not,” Holvey said on NBC. “He was just looking me over like I was a piece of meat, I was not a human being, I didn’t have a brain, I didn’t have a personality. I was just simply there for his pleasure. It left me feeling very gross, very dirty. This is not what I signed up for.”

Later, at the press conference, Holvey said it was her “dream” as a young girl to compete in a pageant.

“But I have a new dream now. That this man will be held accountable for his actions,” Holvey said.

Allegations of misconduct by Trump surfaced during the 2016 presidential campaign. They took center stage in the final weeks after a decade-old “Access Hollywood” tape revealed Trump making lewd comments about women. The Trump campaign discounted the tape, at the time, as “locker room talk.”

The White House released a fresh statement early Monday decrying the "false" claims of the women at the press conference.

“These false claims, totally disputed in most cases by eyewitness accounts, were addressed at length during last year’s campaign, and the American people voiced their judgment by delivering a decisive victory,” a White House spokesperson said in a statement. “The timing and absurdity of these false claims speaks volumes and the publicity tour that has begun only further confirms the political motives behind them.”

Press Secretary Sarah Sanders said in Monday's press briefing that she would provide information from "eyewitnesses" who disputed some accounts of the president's accusers.

"Look, as the President said himself, he thinks it's a good thing that women are coming forward, but he also feels strongly that a mere allegation shouldn't determine the course," Sanders said when asked about U.S. Ambassador to the U.N. Nikki Haley's recent comments on the matter. "And, in this case, the President has denied any of these allegations, as have eyewitnesses. And several reports have shown those eyewitnesses also back up the President's claim in this process."

Sanders added "there have been multiple reports" about "eyewitness accounts."

But Crooks said the White House’s response was “laughable.”

"A person with this record would have entered the graveyard of political aspirations never to return, but yet, he is president of the United States," she said.

Holvey, Leeds and Crooks are just three of 16 women who participated in a video titled “16 Women and Donald Trump,” which details the allegations against the president.