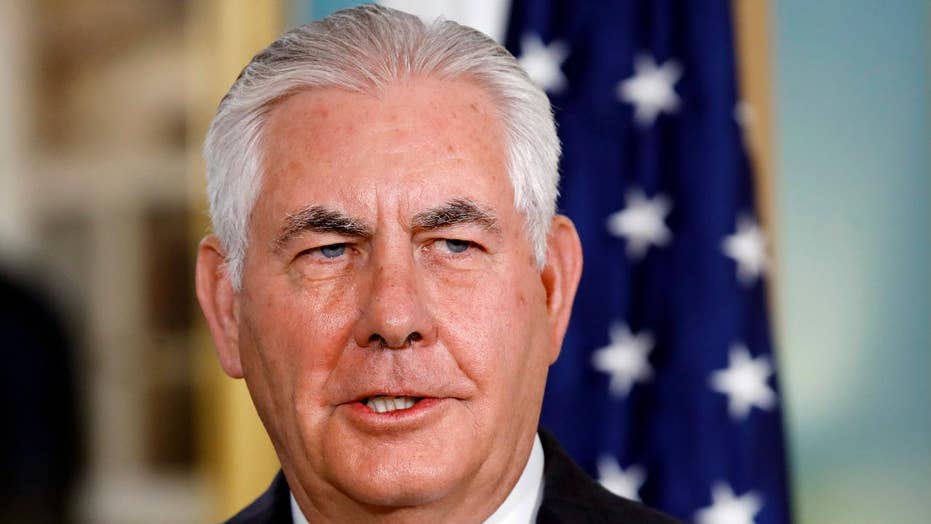 Sec. Tillerson says US has direct communication with NKorea

Secretary of State Rex Tillerson said Saturday during his visit to China that the U.S. is “probing” North Korea for talks and the two countries have communications with Pyongyang.

Tillerson said the U.S. has contacted the hermit kingdom to see if it was interested in talks and the two countries have “lines of communications to Pyongyang," Fox News has confirmed.

“We are probing, so stay tuned,” Tillerson told reporters in China. When asked how the two countries "probed" Tillerson said they would ask directly.

Tillerson told reporters that the U.S. government and North Korean government have "direct communication" with one another over its "nuclear and missile tests."

When reporters asked if the U.S. worked with China to communicate with North Korea, Tillerson said the U.S. has direct access.

Secretary of State Rex Tillerson is in China and met with Chinese President Xi Jinping and other officaisl to discuss trade, North Korea and preparations for President Trump’s visit in November. (AP)

“Directly, through our own channels," Tillerson said.

Tillerson did not go into detail about what type of communications the U.S. has with Pyongyang and if the isolated country has responded.

Tillerson called the tensions between U.S. and North Korea and the threats President Trump and Kim Jong Un have traded the past few days "a bit overheated right now," according to The New York Times.

“If North Korea would stop firing its missiles, that would calm things down a lot," he was quoted as saying.

Tillerson is making his second visit as secretary of state to the world's No. 2 economy and chief American rival for influence in Asia, and increasingly, the world. Along with Xi and Senior Foreign Policy Adviser Yang Jiechi, he met with Foreign Minister Wang Yi, who told Tillerson that China-U.S. relations "overall have a positive momentum and have arrived at an important opportunity to progress further."

Neither Tillerson nor the Chinese officials mentioned North Korea in opening remarks made in the presence of journalists.

TILLERSON IN CHINA TO TALK ABOUT NORTH KOREA, TRADE

Ties between Beijing and Washington are considered more crucial than ever with the standoff over Pyongyang's nuclear weapons and ballistic missiles entering a new, more dangerous phase as its leader, Kim Jong Un, and Trump exchange personal insults and threats of war with no sign of a diplomatic solution.