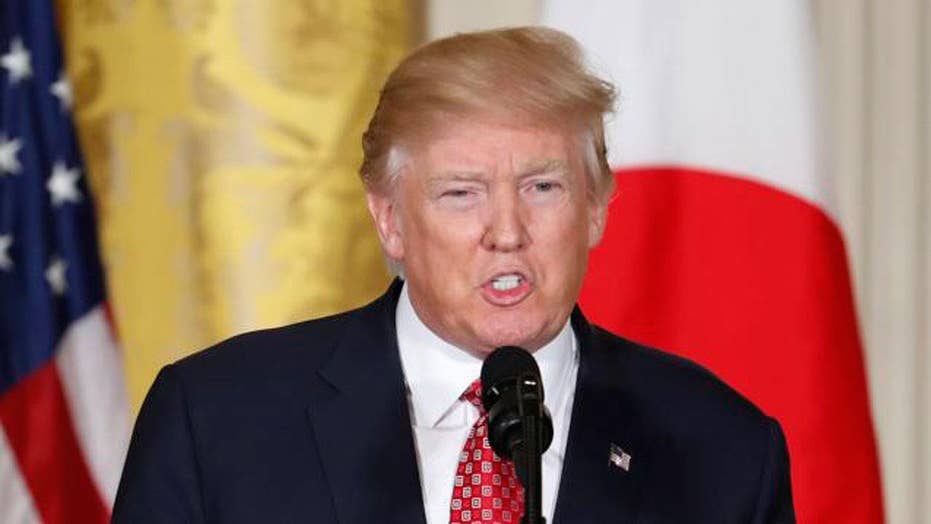 THE MOTHER OF ALL NEWS DUMPS
It’s the Friday before a holiday weekend, and for more than 200 million Americans who are professing Christians, its Good Friday – which means church services for some, travel for many and errands for almost all.

It also happens to be a fantastic day for a news dump.

For the uninitiated, an afternoon like this one is a great time to break some bad news. It’s still technically a workday. But people are distracted. News organizations are short-staffed. The stock market is closed. And by about 3 p.m. ET, most of America has checked out of work mode.

And by Monday, there will be a whole new set of outrages, viral videos, hot takes and sensations to absorb our attention.

If your company isn’t getting the patent, if you’re dropping out of the race, if the congressman’s Twitter wasn’t really hacked or if you’re sorry to say that, yes, in fact that really was you in the videotape, this is your moment!

And in Washington, it certainly feels like a banner day to, as the song says, “let it go.”

With so much gossip, so many leaks and so much drama it could seemingly be anything.

But if we are going to let our imaginations run, let’s let them run as wildly and freely as a pack of toddlers all jacked up on Peeps.

With that in mind, we offer you the Halftime Report’s fantasy Good Friday news releases. The mother of all news dumps, if you will. Here’s what we wish you would be missing while you are fighting over the last ham at the grocery store:

1) United Airlines announces it is cancelling its long-scheduled but ill-timed cross promotion with World Wrestling Entertainment: “Smack Down High Fares.”

2) Former Secretary of State Hillary Clinton will suspend her bid to join the Chappaqua, N.Y. Zoning Board, “blaming powerful floral interests” who she says are backing the new signage for Edith’s Flowers and Gifts for the setback. No determination has been made about the estimated $7.5 million in campaign funds Clinton raised.

3) President Trump’s executive order re-naming “Trumpsconsin,” “Trumpsylvania” and “Trumpigan” was issued without prior review by the White House Counsel’s Office. The order is temporarily withdrawn pending Jared and Ivanka’s return from their skiing trip.

4) Energy Secretary Rick Perry did not, contrary to fake news reports from the dishonest media, discharge a firearm in the large conference room on the fourth floor in celebration of the early completion of the quarterly Federal Energy Regulatory Commission review. In other news, the small conference room on the sixth floor will be temporarily closed for renovations.

5) Senate Minority Leader Chuck Schumer apologizes for the insensitivity of having JPMorgan Chase & Co. and Deutsche Bank as sponsors of his People’s Justice Uprising for Climate and Income Equality event scheduled for next week. The leader still hopes that Sen. Bernie Sanders will reconsider and attend but disagrees with the assessment from his good friend from Vermont that the leader is “a putz.”

6) Supreme Court Associate Justice Neil Gorsuch acknowledges the authenticity of photographs and one very disturbing video showing him as a former roadie for the heavy metal band Queensrÿche and engaged in what some have deemed as acts of animal cruelty. Those looking for an on-the-record quote from the justice can feel free to use the following: “Too late now, suckers. “Rage for Order,” b---hes!.”

7) The Washington Post’s new front-page motto “Democracy dies in darkness” will be replaced by something more in keeping with the paper’s current mission: “Click this link or Donald Trump will eat your liver.”

9) House Speaker Paul Ryan was released without charges today by the Hamilton County Ohio Sheriff’s Department following what the speaker deemed “a simple misunderstanding.” While he was, as local outlets have reported, found on the property of his good friend and colleague former Speaker John Boehner, officials had no admissible evidence that Speaker Ryan was in any way responsible for the vandalism to the Boehner’s lawn mower or for burning the words “YOU DID THIS TO ME” in the family’s front yard with gasoline.

10) A statement from White House press secretary Sean Spicer: “As God is my witness, I had no idea when I kicked that bag in frustration that it contained a puppy. While I was wrong to vent my frustrations by kicking anything, I had no way of knowing that in the velvet bag was an Easter gift to one of my aides from her fiancée. I certainly could not know that it contained an adorable, six-week old Irish setter named Bella, with the most beautiful big brown eyes that just break your damned heart. Moreover, the only reason the whimpering puppy limped into the packed press room just moments before I was to begin my briefing was that I was distracted by my efforts to obtain veterinary care for the injured animal. I’m so sorry, Bella…”

THE RULEBOOK: THE CIRCLE OF LIFE
“The surrounding powers impose an absolute necessity of union to a certain degree, at the same time that they nourish by their intrigues the constitutional vices which keep the republic in some degree always at their mercy.” – Alexander Hamilton or James Madison,Federalist No. 20

TIME OUT: EGGS? REALLY?
TIME: “Easter, which takes place this Sunday, usually occurs towards the beginning of spring, a season when plants bloom and animals give birth. Eggs in particular are a clear symbol of rebirth and fertility. …But when it comes to the Easter egg, however, evidence suggests that the obvious metaphor came after the association between the holiday and the item was already established. The story starts in Medieval Europe, but it may or may not have originated with Christians. According to some, the first Easter eggs actually belonged to a different religious tradition. ‘Many scholars believe that Easter had its origins as an early Anglo-Saxon festival that celebrated the goddess Eastre, and the coming of spring, in a sense a resurrection of nature after winter,’ Carole Levin, Professor of History and Director of the Medieval and Renaissance Studies Program at the University of Nebraska, tells TIME in an email.”

POWER PLAY: GET YOUR ROLL ON
Before you begin your Easter weekend Fox News politics editor Chris Stirewalt is back with another ‘Power Play’ quiz show on the week’s news and more! With the holiday around the corner we brushed up on Washington’s Easter history. Do you know who the first president was to host the Easter Egg Roll at the White House and why? Test your knowledge against this week's players, Chris Deaton and Susan Ferrechio. WATCH HERE

A new Steve tries to rise: Stephen Miller expands his profile at the White House - Politico

ANY GIVEN SUNDAY
Watch “Fox News Sunday with Chris Wallace” Check local listings for broadcast times in your area.

AUDIBLE: BURN
“They quietly go about their work and try not to get too worked up over the headlines, including the fanciful notion that they spy on their fellow citizens via microwave ovens.” –Speaking at the Center for Strategic and International Studies, CIA Director Mike Pompeo compliments his staff while mocking Kellyanne Conway’s statement regarding the president’s claim that the Obama administration wiretapped Trump Tower.

FROM THE BLEACHERS
“In [yesterday’s] Audible NYC to OK, an unnamed Republican spouted some gibberish about Oklahoma City or the Ozarks. Being from Missouri, a large portion of which contains some of “the Ozarks’, I know several people, personally, and as evidenced by Missouri being a RED STATE, that would welcome the Trump organization’s businesses, buildings, and brand to our Show Me state; just as Trump himself is welcome as our POTUS. I don’t consider that unnamed person’s statement to be naïve and offensive to our State.  I consider THAT person to be even more naïve and offensive than he thinks we are.  The kicker is that he is STUPID too.” – Carla Ball, Kahoka, Mo.

[Ed. note: Ms. Ball, I would not dare to endeavor to improve on what you’ve said. And I would be a little afraid to try…]

“In attempting to reform healthcare, politicians should remember what H.L. Mencken said, ‘For every complex problem there is an answer that is clear, simple, and wrong.’ Americans dichotomize between ‘Healthcare’ and ‘My Healthcare.’  We support change as long as I and my family can receive the best care and fastest care when we need it. Healthcare cost inflation can be attributed to two events.  The introduction of Medicare in 1965 and the creation of the intermediary in 1936.  Since we do not have the courage to touch entitlements, a solution requires we diminish the intermediary's influence.  The core approach must be Health Saving Accounts which return health care purchasing responsibility to the individual.  How HSAs are structured is critical as are changes to the insurers market and reimbursement structures.  Politicians will never figure it out.” – Ira B. Korman, Dallas

[Ed. note: Very well said, Mr. Korman! Giving the federal government the problems of health insurance and health care (two very different things) to try to solve would be like asking an orangutan to replace the alternator in your car. They make a lot of noise and create a lot of mess, but things never seem to end up in the right place. You sound like a person who knows from whence he speaks on this subject, so I am inclined to defer to you. But I do know this: one of the reasons that people have lost so much confidence in the government over the past 50 years is that people have continued to ask it to do things for which it is neither designed nor equipped. It’s unfair to be disappointed when the orangutan puts your alternator in wrong.]

G.O.A.T.
WREG: “… [Speedy the goat], the loud family pet, is now being hailed a hero. … [Abigail Bruce] said her sleep was interrupted Saturday night by Speedy. Speedy was jumping on her legs and then her chest. … ‘I woke up to Abigail running into the room saying it was smokey and she could barely breathe,’ said her father Nick Bruce. He soon realized the garage was engulfed in flames. … The family jumped out the bedroom window and onto the front lawn unscathed. … The family said it could have been worse if it weren't for Speedy. … Speedy joined the family two days before their home caught fire. The goat was an early birthday gift for Abigail. ‘I didn't approve of him at first but he'll be there from now on,’ said Nick Bruce.”

AND NOW, A WORD FROM CHARLES…
“And the reason it is a radical departure is because in the inaugural address he defines national interests very narrowly, and here, what we are back to is the traditional American understanding of national interests as a broad definition going all the way back to Harry Truman in which we define our interest as worldwide.” – Charles Krauthammer on “Special Report with Bret Baier.”