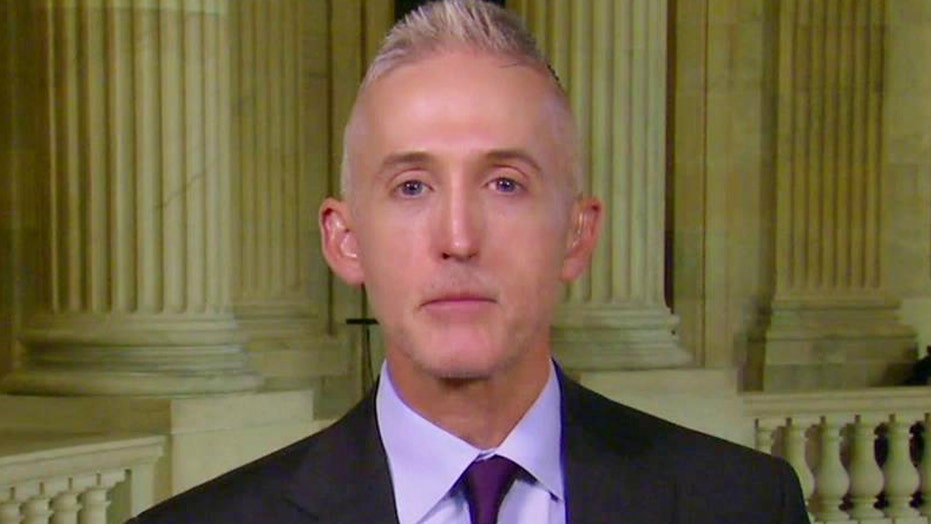 How can Benghazi committee be sure about Hillary emails?

More than 900 previously-unreleased emails have been turned over Benghazi Select Committee. Chairman Trey Gowdy goes 'On the Record' whether Clinton's team can be trusted,

For a moment, Rep. Trey Gowdy was conservatives' shining hope to help lead the way in a post-Boehner world.

The short-lived courtship of Gowdy for House majority leader was one of the more Quixotic developments in the wake of Speaker John Boehner's announced retirement. The effort flared and fizzled quickly, even by Washington standards -- here's what happened behind the scenes:

Over the weekend, a number of conservatives went to the South Carolina Republican in an effort to get him to run for majority leader -- in effect, to replace sitting Majority Leader Kevin McCarthy, R-Calif., should he win the speakership. Fox News is told that after many conversations and some soul-searching, Gowdy -- albeit reluctantly -- agreed to be a candidate as a placeholder if House Republicans were at an impasse at settling on a new leader.

Gowdy was seen as a "fallback candidate." One source close to Gowdy indicated that "he was never interested in asserting himself into the race."

By Monday night, though, the Gowdy courtship reached a fever pitch with conservatives begging him to step into the fold.

Fox News is told that discouragement over the leadership candidacies of House Majority Whip Steve Scalise, R-La., and Budget Committee Chairman Tom Price, R-Ga., deeply divides House Republicans. The moderates believe Scalise is too conservative. Conservatives and backbenchers view them both as being too "inside" and close to leadership, particularly since Scalise is already "in" leadership.

So the courtship of Gowdy grew more intense, to the point where some members wanted him to actively pursue the majority leader's job.

"He was very uncomfortable with the idea he was inserting himself into the race," one source said.

By Monday night, House Republican Conference Chairwoman Cathy McMorris Rodgers, R-Wash., dropped out. It is unclear whether the rumblings of a potential Gowdy candidacy may have helped torpedo her efforts.

But one source said her withdrawal "changed the tenor of the race immediately."

"When Cathy withdrew, it went from a three-way race to a two-way race with Gowdy maybe off to the side."

"Trey thought he was interfering," one source said.

Yet discussion about Gowdy further intensified after a meeting with McCarthy and a quip by Boehner on the floor.

Rep. Mick Mulvaney, R-S.C., one of Gowdy's closest friends, indicated that Boehner pointed at Gowdy as he walked by Tuesday and said, "You should do this."

That launched speculation that Boehner was injecting himself into the leadership contest. Further, Rep. Jason Chaffetz, R-Utah, used an appearance on Fox News' "Fox and Friends" Tuesday morning to effectively endorse Gowdy for the job.

Those trying to coax Gowdy into the race saw the following upsides:

And it became clear Gowdy figured he had to extract himself from the conversation -- which he did in a rousing speech to the House Republican Conference Tuesday night, saying he's not running for majority leader.

But the speculation didn't stop there. One lawmaker kicked up rumors that Gowdy would actually retire at the end of his term, saying on C-SPAN that's what he's telling colleagues.

But others tamped that down. Mulvaney said Gowdy is always talking about resigning.

"I don't think I've ever had a conversation where [Gowdy] doesn't talk about resigning. We've had three today. Trey hates Washington," Mulvaney said.

As a result of Gowdy being out of the mix, Fox News is told to expect other candidates to try to jump into the race between now and next week.