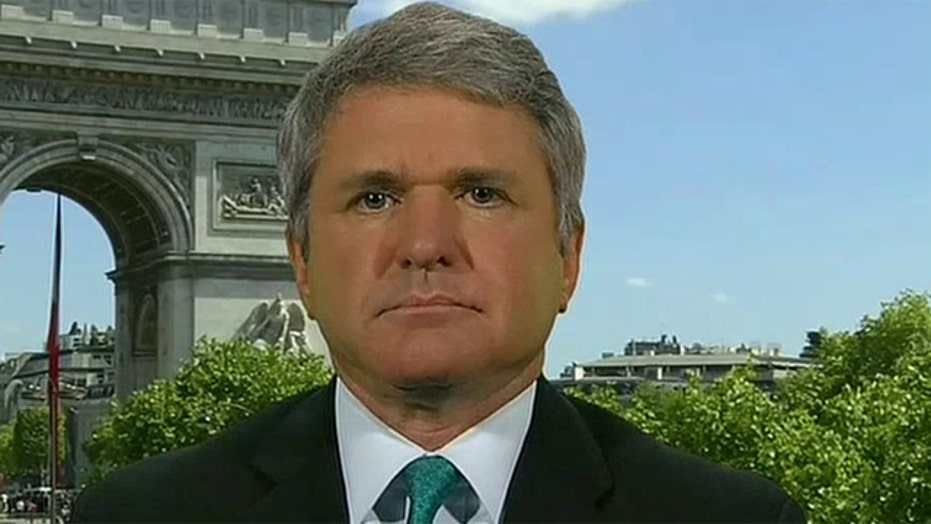 Top U.S. officials and lawmakers on Sunday intensified concerns about the growing threat of jihad-inspired terror attacks against the United States, after last week’s attempt in Texas and the dire FBI warning that followed.

“I think there’s been an uptick in the stream of threats out there,” Texas GOP Rep. Mike McCaul, chairman of the House Committee on Homeland Security, told “Fox News Sunday.” “We’re seeing these directives on almost a daily basis. It’s very concerning. Terrorism has gone viral.”

McCaul’s comments follow the May 3 attack by two gunmen outside a “Draw Muhammad” event in Garland, Texas.

Tweets by one of the two gunmen, killed by police in the attack, appear to link him to radical Islamic terror groups. And Internet chatter purportedly tipped off officials about a possible attack on the event.

On Thursday, FBI Director James Comey said the attack, in which a security officer was shot in the leg, highlights the difficulties the FBI faces -- as social media facilitates communication between terror groups and potential homegrown extremists.

He also said the Islamic State terror group has thousands of English-language followers on Twitter, including many in the U.S.

The group also is increasingly steering followers into forums that allow for encrypted communications that can be harder for law enforcement officials to access.

In addition, the Islamic State has been encouraging followers to travel to Syria to join the self-created caliphate there, but if they can't do that, to "kill where you are," Comey said.

"The siren song sits in the pockets, on the mobile phones, of the people who are followers on Twitter," Comey said. "It's almost as if there's a devil sitting on the shoulder, saying 'Kill. Kill. Kill. Kill,' all day long."

McCaul said Comey was “exactly right” and that trying to find ISIS’ calling for terror attacks across the broad spectrum of social media is “like trying to find a needle in a haystack.”

He also said the terror threat now is “one of the highest that I’ve ever seen” and warned of similar incidents in the future.

“It’s going to get worse, not better,” he said. “This is very difficult to stop.”

Also on Sunday, Homeland Security Secretary Jeh Johnson said the U.S. is facing a new phase of terrorism in which a so-called lone-wolf terrorist, inspired by Islamic State propaganda on social media, could “strike at any moment.”

The Obama administration has said the attack in suburban Dallas last week was a “lone wolf” effort.

“We’re very definitely in a new environment, because of ISIL’s effective use of social media, the Internet, which has the ability to reach into the homeland and possibly inspire others,” Johnson said on  ABC’s “This Week.”

On Friday, the Pentagon increased security measures for military bases across the country based on what officials said are increasing but non-specific threats from Islamic State extremists and supporters.

"I think [the Islamic State's message] is 'kill, kill, kill,' " she said on NBC’s “Meet the Press.” "It's a force that we really haven't seen before, and we have to begin to cope more seriously with it, and that includes social media."

She also suggested a changing terror environment in which Islamic extremist groups encourage a lone wolf to commit an attack, then “take credit for it.”