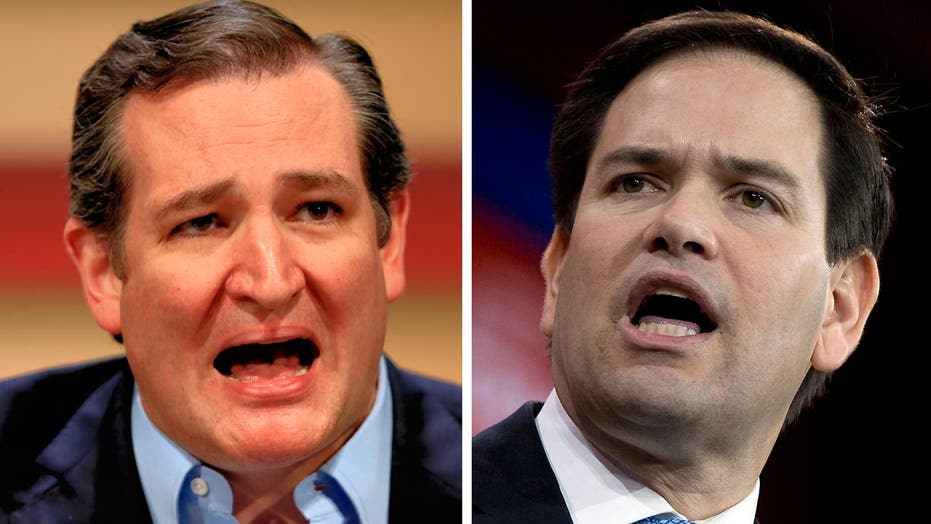 Brewing Rubio, Cruz feud a problem for the Senate

Bias Bash: Justin Duckham asks why the media are missing the connection between campaign trail and Capitol Hill

Ted Cruz unveiled a hard-line immigration plan on Friday that includes a border wall as he also ramped up attacks on rival Marco Rubio, saying the Florida senator stood "shoulder to shoulder" with lawmakers in support of a "massive amnesty plan" for illegal immigrants.

The Cruz plan includes everything from building a complete southern border wall to ending birthright citizenship to halting legal immigration when unemployment gets “unacceptably high.”

"I will complete the wall," Cruz vows in the plan, endorsing an objective that Donald Trump has been touting for months.

Shortly before releasing the document, Cruz zeroed in on Republican presidential rival Rubio, who is third in most national polls and narrowly ahead of Cruz.

"Listen, I like Marco a lot, he is charming and he's very well-liked in Washington," Cruz told Fox News right before hitting the stage. "But at the end of the day, where you stand on the issues speaks volumes."

Cruz accused Rubio of being the "point of the spear" for the bipartisan "Gang of Eight" senators who tried to come up with a comprehensive immigration policy in 2013 and failed. He accused Rubio of standing "shoulder to shoulder" with them.

"Where you stood up and lined up on the Gang of Eight bill was a time for choosing," Cruz later said during the rally. Without naming names, he blasted Republicans who support giving law-abiding illegal immigrants a path to citizenship. "There is nothing compassionate about a politician saying I am so compassionate I am willing to give away your jobs."

Rubio shot back on Friday. "On the immigration front, as I said, I'm puzzled and quite frankly surprised by Ted's attacks since Ted's position on immigration is not much different than mine," Rubio told reporters after his own speech Friday. "He's a supporter of legalizing people who are in this country illegally. If he's changed that position, then someone has a right to change his position on the issue but he should be clear about that."

When asked about this Friday, Cruz quipped, "I have to say, when I heard that I laughed out loud. I understand why he regrets having taken the position he did. To say we are on the same [page] on the immigration issue is to say my position and Barack Obama's position on health care is the same."

Cruz, meanwhile, said President Obama lacks the "will" to build a complete wall along the southern border and as president he would  “build a wall that works," along with tripling the number of border agents, increasing surveillance, and adding biometric screening at entry checkpoints.

Further, Cruz says he would prevent illegal immigrants from receiving financial benefits and strengthen E-Verify for employers. He would suspend the issuance of all H-1B (employment) visas for 180 days for audit to ensure it is not being abused. He would also require that anyone coming in with an H-1B visa have an advanced degree, and prevent employers bringing these visa holders in from laying off domestic workers for a set period of time.

Cruz's position on high-skilled visas represents a complete about-face on one of his long-held immigration stances.

Perhaps most radically in the new plan, Cruz says he would halt “any increases in legal immigration so long as American unemployment remains unacceptably high.” He would also enforce the “public-charge” doctrine, which would force immigrants to certify they are self-sufficient before they are given permission to live in the U.S. “The purpose of legal immigration should be to grow the economy, not displace American workers,” he said. “Under no circumstances should legal immigration levels be adjusted upwards so long as work-force participation rates remain below historical levels.”

He would also take steps to pass legislation or pursue a constitutional amendment to end “birthright citizenship,” which grants citizenship to any child born on U.S. soil.

Cruz also said he will “end President Obama’s illegal amnesty” by rescinding any executive orders allowing people who are here illegally to stay, and end any federal support for cities with so-called “sanctuary policies” which he said “make a mockery of our laws and endanger our citizens.”

On Syrian refugees, Cruz was unequivocal. "They need to be settled in the Middle East and majority Muslim countries," not in the U.S., where "it makes no sense whatsoever." He suggested that most of the refugees entering Europe from the war zones are "young men" and among them could be members of the Islamic State.

"It is lunacy to bring refugees into this country who may be terrorists trying to murder Americans," he said.

Fox News' Carl Cameron and The Associated Press contributed to this report.