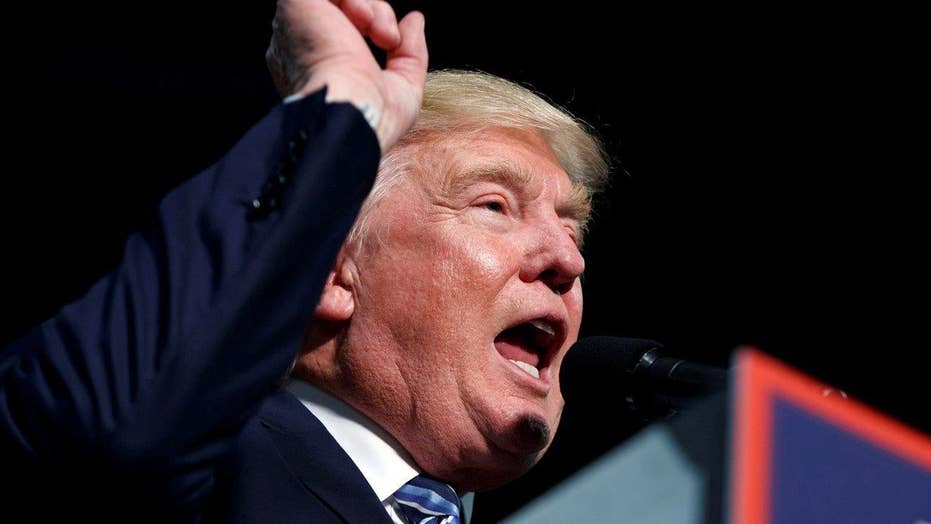 Trump going all in on 'rigged election' narrative

The Donald Trump campaign on Sunday heaped more blame on the media, accusing news organizations of “rigging” the election for Democratic rival Hillary Clinton but vowing to accept the Nov. 8 results -- win or lose.

"We will absolutely accept the results of the election," Republican vice-presidential nominee Mike Pence said on NBC’s “Meet the Press.”

Pence made the comment amid two polls Sunday that showed Clinton with a solid lead and as he and Trump resumed their attack on the media -- after essentially nine straight days of headlines related to Trump’s treatment of women over the past 30 years.

“The American people will speak,” Pence continued on NBC. “But (they) are tired of the obvious bias in the national media. That's where the sense of a rigged election goes here.”

And an NBC-Wall Street Journal poll shows Clinton with an 11 percentage point lead over Trump, her GOP rival, with 23 days before Election Day.

“The media is piling on with unsubstantiated claims … while they ignore an avalanche of hard evidence about corruption, pay to play, political favoritism emanating out of Hillary Clinton's years as secretary of state,” Pence told “Fox News Sunday.”

He cited the example of a hacked email recently released by WikiLeaks that shows that representatives from Qatar in 2012, while Clinton was secretary of state, apparently tried to get a quick meeting with Clinton’s husband, former President Bill Clinton, to give him a $1 million check for the family foundation.

Trump on Sunday continued his attack on the media via Twitter, after making his case in person Saturday at three campaign rallies.

"The election is absolutely being rigged by the dishonest and distorted media pushing Crooked Hillary -- but also at many polling places," Trump tweeted.

On Saturday, Trump, a first-time candidate and wealthy New York businessman, suggested that Clinton, during their debate earlier this month, appeared to be on drugs -- acting “pumped up,” then exhausted at the end.

He suggested they each take a drug test before their third-and-final debate Wednesday and mocked Clinton for staying off the trail the entire weekend to prepare.

Pence declined to elaborate on Trump’s remark, saying to Fox News, "All I know for sure is that Donald Trump is going to be ready for the debate.”

The stories about Trump mistreating women started with the Oct. 7 release of a 2005 audiotape in which Trump is heard bragging about his celebrity status allowing him to kiss and fondle women without their consent.

Trump has apologies for the comments, and nine women have since come forward to say Trump acted inappropriately with them. Trump has denied the allegations, calling one woman a “liar,” while he and Pence work to find evidence to refute the allegations.

Some showed the campaign worrying whether Sen. Elizabeth Warren, D-Mass., might endorse Sen. Bernie Sanders in the party's primary, and wrestling with how to respond to revelations about Clinton's private email use. The emails also show aides lining up materials to respond to fresh accusations from a woman who accused Bill Clinton of raping her decades ago. The former president denied the accusation, which was never adjudicated by a criminal court.

"When he talks about a rigged election, he's not talking about the fact that it's going to be rigged at the polls," the former New York City mayor said on CNN’s “State of the Union.” “What he's talking about is that 80 percent to 85 percent of the media is against him."