The former House speaker shares his thoughts on 'Hannity'

Call it a case of mixed-up metaphors -- but President-elect Donald Trump is renewing his vow to "drain the swamp" after key allies indicated the anti-corruption catch phrase was being ditched.

Former House Speaker Newt Gingrich initially had told NPR that Trump “disclaims” the phrase and “now says it was cute, but he doesn't want to use it anymore.”

But Gingrich tweeted a video message on Thursday admitting he made a "big boo boo" and saying Trump has reminded him he still "intends to drain the swamp." Gingrich wrote, "I goofed. Draining the swamp is in."

I goofed. Draining the swamp is in, @realDonaldTrump is going to do it, and the alligators should be worried. #DTS https://t.co/nCHs61gpve pic.twitter.com/OCO7eaSKvk

Trump also tweeted minutes earlier that "someone incorrectly stated" he wouldn't use the phrase. He sought to set the record straight.

Trump's aides also said earlier he remains committed to his underlying swamp-draining policies, such as banning outgoing Trump transition and administration members from lobbying for five years. Trump also prohibits any lobbyists from joining his transition team or administration unless they de-register.

At the same time, Corey Lewandowski, Trump’s former campaign manager, indicated Thursday morning that other policy priorities are taking a front seat for the incoming administration.

“I think if you had to put them in a chronological order, drain the swamp is probably somewhere down at the bottom as opposed to getting tax reform done , making sure middle-class people have more jobs, making sure we’re renegotiating our bad trade deals,” he told “Fox & Friends.” “At the end of the day, it’s about the economy.” 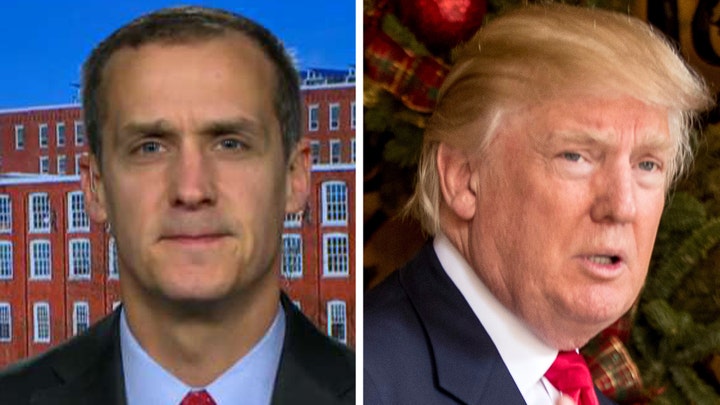 Lewandowski's recent decision to open up a consulting shop just a block from the White House shows that insiders will continue to play a role in the Trump administration.

Lewandowski, who was Trump's first campaign manager, and former Trump adviser Barry Bennett have formed a government relations and political consulting firm and are pitching their ties to Trump as they seek clients.

The move drew some criticism. Meredith McGehee, chief of policy, programs and strategy at the government reform group Issue One, told the Associated Press the move is “business as usual.”

Lewandowski defended his new role Thursday, telling Fox News he just wants to be helpful in advancing Trump’s agenda to help the economy, while being a “resource” to corporations that want a fast answer and not a “long maybe” from the government.

Lewandowski has been a fixture at Trump Tower in New York as the president-elect forms his administration. But because he never had an official transition title, he doesn't run afoul of Trump's ban on transition officials going on to lobby the government.