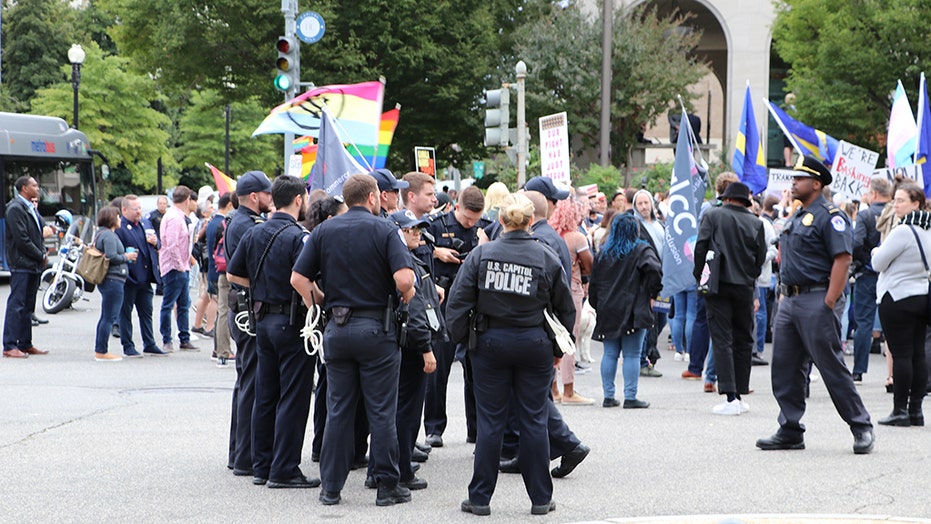 The U.S. Capitol Police briefly moved protesters away from the front of the U.S. Supreme Court Tuesday morning after the discovery of two suspicious packages, but safely cleared the scene as oral arguments began in a high-profile day for the court.

The packages were discovered around 8 a.m. ET and officers closed some streets to traffic in the immediate area around the Supreme Court. Police did not evacuate the court itself, though they did move a large group of protesters from the area in front of the court steps where the court was to hear three cases about discrimination against gay and transgender individuals in the workplace.

The second protest location was not far from the original.

JUDGE NAPOLITANO: SUPREME COURT DECISION ON LOUISIANA ABORTION LAW WILL BE A 2020 'BOMBSHELL'

"It's not gonna stop us," said David Barrows, who held a pro-LGBT rights sign while wearing a "Dump Trump" hat. "But it is too bad we can't be out front where the action is taking place."

Barrows, along with other protesters, expressed confidence in the Capitol Police to keep the demonstrations safe, saying they were simply waiting for the scene to clear. He said he stayed because he is concerned the high court might rule to "betray human rights" by upholding precedent that it is not illegal to discriminate against gay and transgender people for employment.

Barbara Ehardt, an Idaho state representative and former Division I women's basketball coach, was walking toward the Supreme Court before the scene in front of the building had been cleared. The staunch Republican who has spoken out against the transgender movement in the past said she was slated to speak against the court overturning precedent in the transgender case.

"It's simply not fair and right that boys and men can take the place of girls and women in sports," she said.

While there were protesters on both sides of the cases being argued Tuesday -- Bostock v. Clayton County, Altitude Express, Inc. v. Zarda and R.G. and G.R. Harris Funeral Homes, Inc. v. Equal Employment Opportunity Commission -- those in favor of gay and transgender rights made up a large majority.