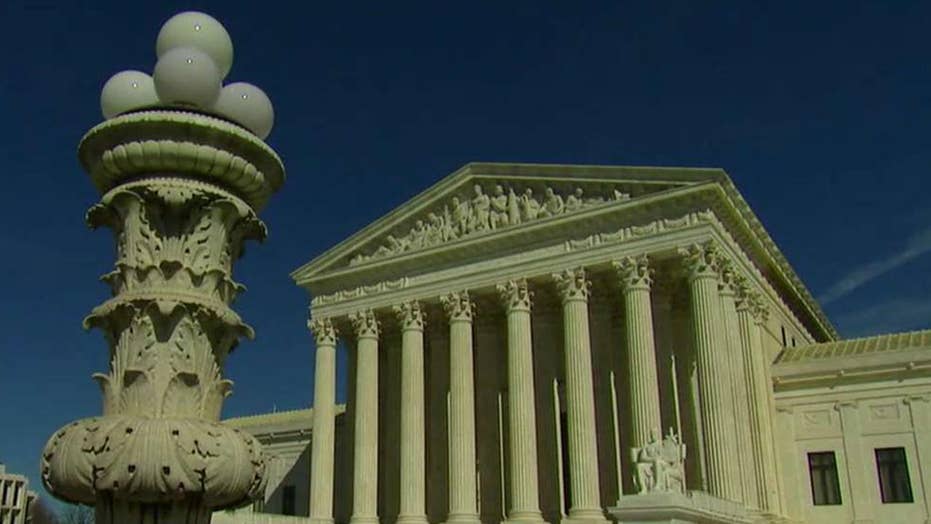 Abortion case could have wide-ranging implications

Supreme Court justices weigh whether pro-life pregnancy centers can be required to give out information about the availability of abortions; 'Fox News @ Night' anchor Shannon Bream reports.

In a 5-4 vote on June 26, the Supreme Court ruled in favor of pro-life crisis pregnancy centers, arguing that a California law passed in 2015, which requires the centers to inform clients about free or low-cost abortion services, is probably a violation of free speech.

The news comes after the Supreme Court agreed to hear the case in November 2017. Oral arguments officially began in March.

In light of the decision, which casts doubt on similar laws in Hawaii and Illinois, here’s what you need to know about National Institute of Family and Life Advocates v. Becerra.

What does the California law say?

California’s Freedom, Accountability, Comprehensive Care and Transparency Act, more commonly known as the FACT Act, was passed in October 2015. It requires pregnancy facilities to post a disclosure to inform clients that “California has public programs that provide immediate free or low-cost access to comprehensive family planning services, prenatal care and abortion for eligible women,” according to the law. It also requires unlicensed, non-medical facilities to inform clients that they are not licensed medical providers.

The public notice is required to be posted in a “conspicuous place” in the facility’s waiting room, and must be "8.5 inches by 11 inches and written in no less than 22-point type." However, clinics can also choose to provide printed or digital notices to clients instead.

If pregnancy centers fail to comply with the law, they’re fined $500 for a first offense and $1,000 for each subsequent offense, according to the law.

What’s the rationale behind the law?

More than 700,000 California women become pregnant each year, and half of those pregnancies are unintended. Yet “thousands of women remain unaware of the public programs available to provide them with contraception, health education and counseling, family planning, prenatal care, abortion or delivery,” California legislators argue.

“Because pregnancy decisions are time sensitive, and care early in pregnancy is important, California must supplement its own efforts to advise women of its reproductive health programs,” the law reads.

The cases to watch in the new Supreme Court term

The Court is taking on cases from religious liberty to union dues.

Low-income women can receive access to free or low-cost family planning services through California’s Medi-Cali and Family PACT programs. But only Medi-Cal providers who are enrolled in the Family PACT program can enroll patients at their health centers. That’s why legislators argue that the most effective way to ensure women in the state “quickly obtain the information and services they need to make and implement timely reproductive decisions,” according to the bill, is by requiring licensed health care facilities -- regardless of their stance on abortion -- to inform women of their options.

In addition, legislators argue it’s “vital” pregnant women in the state know when they are receiving medical care from a licensed professional. This is addressed by the requirement that unlicensed facilities that “advertise and provide pregnancy testing” must disclose to clients that they are not licensed medical care providers.

This portion of the law is also targeted at religious pregnancy resource centers because many of them are not licensed medical facilities, supporters of the legislation say -- adding that these facilities provide misleading information about the services they offer to women to deter them from getting an abortion.

What’s happened since the law was passed?

The legislation triggered lawsuits almost immediately after it was passed. One religious non-profit, the Scharpen Foundation, won its case against the state of California and will no longer have to adhere to the FACT Act. But other pro-life pregnancy centers have been widely unsuccessful in getting the law overturned, especially at a federal level.

The National Institute of Family and Life Advocates (NIFLA) and the plaintiff in the Supreme Court case sought a preliminary injunction to prohibit enforcement of the Reproductive FACT Act. NIFLA claimed the law violated their First Amendment rights to free speech and free exercise of religion.

But the 9th Circuit Court of Appeals rejected both arguments and upheld the law -- arguing that the state could regulate professional free speech and the law protects public health interests.

On Nov. 13, the Supreme Court granted "certiorari," or a formal order, to only review NIFLA’s free speech argument.

What do opponents say?

NIFLA, which first filed a legal challenge to the FACT Act in 2016, is a public interest law firm that gives legal counsel and training to pregnancy centers across the country.

Roughly 135 pregnancy resource centers in California are members of NIFLA, Thomas Glessner, founder and president of the organization, told Fox News. With the Supreme Court case approved, this means that NIFLA will fight the law for each of its members collectively as opposed to each center individually fighting the law on its own.

“[The law] was a brilliant political move on their part,” Glessner said. “It mandates under law that the pro-life centers are advertising for abortion.”

“Can the government impose and compel a faith-based ministry to proclaim a message that they are fundamentally opposed to with the risk of being fined or shut down?”

But Glessner added that he thinks it’s “scandalous that the law allows a multimillion-dollar abortion industry to bully small non-profits.”

While the case is related to abortion, the real issue here, he said, is compelled speech -- a form of speech that is presumably unconstitutional.

“Can the government impose and compel a faith-based ministry to proclaim a message that they are fundamentally opposed to with the risk of being fined or shut down?” he asked. “That’s the issue here.”

Glessner said he believed NIFLA, which was represented in court by the Christian non-profit Alliance Defending Freedom (ADF), would win, adding that the Supreme Court “hates compelled speech, which is why I’m confident we’ll get the liberals on the court.”

In a statement to Fox News, Denise Harle, legal counsel for the ADF, said, "It is unjust for the government to force anyone to speak a message they disagree with -- and to punish them if they don’t."

"We expect that the Supreme Court will uphold the First Amendment and will see the danger in governments compelling anyone -- individuals or non-profits -- to promote a message that conflicts their beliefs. Threats to one person's free speech rights is a threat to everyone's free speech rights," Michael Farris, the CEO of ADF and the lead arguing attorney on the case, said in a statement to Fox News on March 20, the day oral arguments began.

“No one should be forced by the government to express a message that violates their convictions," Farris said after the Supreme Court announced its decision.

"Tolerance and respect for good-faith differences of opinion are essential in a diverse society like ours. They enable us to coexist peacefully with one another. If we want to have freedom for ourselves, we have to extend it to others," he continued.

The Supreme Court's decision could also provide a sense of consistency. Indeed, other courts in states such as New York, Texas, and Maryland have invalidated laws that were similar to California's FACT Act. But some states -- such as Hawaii and Illinois -- currently have similar laws in place, which, like in California, have let to appeals and other lawsuits.

Specifically in Hawaii, Glessner said, one of the pregnancy resource centers is located in a church.

“If we win California that should take care of Hawaii,” he said at the time.

Following the ruling, Glessner noted that free speech in the First Amendment "not only includes the right to speak, but also the right to not be compelled by government to speak a message with which one disagrees and which violates one’s conscience."

“The court correctly found that the California law clearly offends this principle," he said, adding that NIFLA was "very pleased" with the court’s decision.

What do supporters say?

In a statement, California Attorney General Xavier Becerra vowed to uphold the law.

“Information is power, and all women should have access to the information they need when making personal health care decisions,” Becerra said in November 2017.  “The Reproductive FACT Act ensures that women in California receive accurate information about their health care options, including whether a facility is a licensed medical provider. The California Department of Justice will do everything necessary to protect women’s health care rights."

“When it comes to making their health decisions, all California women – regardless of their economic background or zip code – deserve access to critical and non-biased information to make their own informed decisions,” he said in a statement.

“Today’s Court ruling is unfortunate, but our work to ensure that Californians receive accurate information about their healthcare options will continue," Becerra continued.

The attorney general was not immediately available for additional comment when contacted by Fox News.