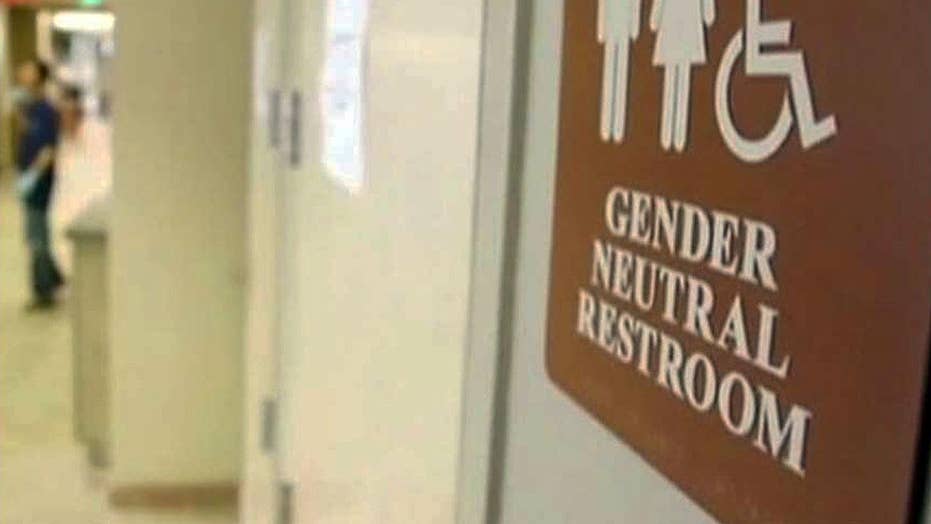 The Supreme Court on Monday sent a dispute over a Virginia transgender student's bathroom access back to a lower court, without reaching a decision.

The court vacated the current dispute after the Trump administration withdrew support for an Obama administration order supporting transgender students. In returning the case, the justices opted not to decide whether a federal anti-discrimination law gives high school senior Gavin Grimm the right to use the boys' bathroom in his school.

The case had been scheduled for argument in late March. Instead, the lower court in Virginia must now evaluate the federal law known as Title IX and the extent to which it applies to transgender students. The law bars sex discrimination in schools.

The case came from a federal appeals court and was brought by Virginia’s Gloucester County school board, which wanted to prevent a Grimm from using the boys' bathrooms.

The appeals court had ordered the school board to accommodate Grimm. But the justices in August put that order on hold while they considered whether to hear the appeal.

Grimm, a 17-year-old high school senior, was born female but identifies as male.

"I never thought that my restroom use would ever turn into any kind of national debate," said Grimm, who had urged the courts not to take up his case.

He was allowed to use the boys' restroom for several weeks in 2014. But after some parents complained, the school board adopted a policy requiring students to use either the restroom that corresponds with their biological gender or a private, single-stall restroom.

The high court action follows the Trump administration's recent decision to withdraw a directive issued during Barack Obama's presidency that advised schools to allow students to use the bathroom of their chosen gender, not biological birth.

Similar lawsuits have played out across the country.

The Obama administration had sued North Carolina over a state law aimed at restricting transgender students to bathrooms that correspond to their biological genders.

And a federal judge in Texas has sided with the state and 12 other states in issuing a nationwide hold on the administration's directive to public schools, issued in May. The directive told schools to allow transgender students to use the bathroom and locker room consistent with their gender identity.

Though Grimm had urged the court not to take up his case, the school board had asked the court to settle the matter now. It said that allowing Grimm to use the boy’s restroom raises privacy concerns and may cause some parents to pull their children out of school.

The appeals court reinstated Grimm's Title IX claim and sent it back to the district court for further consideration. The judge then issued the order in favor of Grimm.

The Supreme Court justices did not comment on the case beyond their one-sentence order returning it to the 4th U.S. Circuit Court of Appeals.