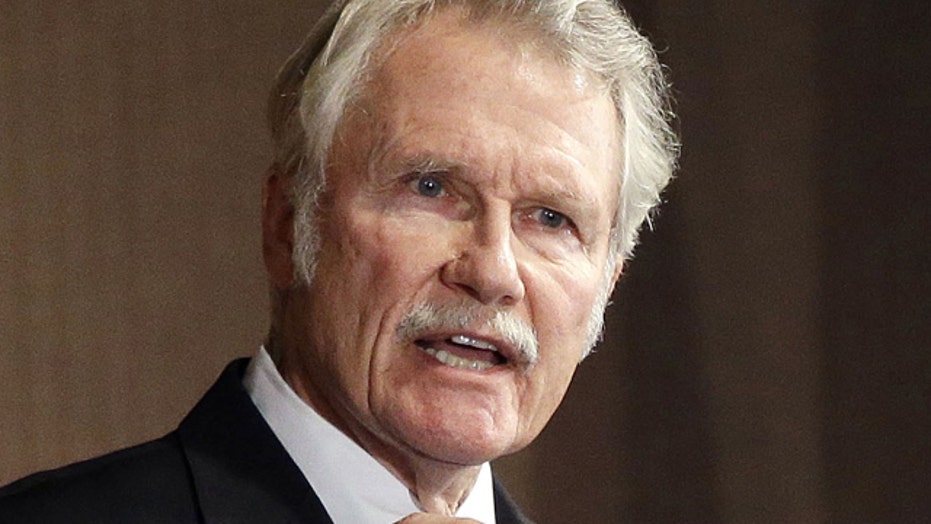 Just hours after Oregon Gov. John Kitzhaber announced his decision to resign, a subpoena arrived in a state office building confirming that federal agents are looking into the influence-peddling scandal that led to the abrupt end of a four-decade political career.

The Democratic governor gave in to mounting pressure Friday, abandoning his office amid suspicions that is live-in fiancée used her relationship with him to land contracts for her green-energy consulting business.

"This is a sad day for Oregon. But I am confident that legislators are ready to come together to move Oregon forward," said Brown, also a Democrat. Unlike most states, Oregon does not have a lieutenant governor. The secretary of state is next in line to succeed the governor.

When Kitzhaber closes the door on his life in public office, the scandal that toppled Oregon's longest serving governor will still linger. Subpoenas delivered to the Department of Administrative Services Friday request a massive array of documents from Kitzhaber's administration.

The subpoena was the first acknowledgment of a federal investigation against Kitzhaber and his fiancée, Cylvia Hayes. It seeks records pertaining to 15 other people besides Kitzhaber and Hayes, including Kitzhaber's chief of staff, policy advisers, Kitzhaber's lawyer and secretaries.

The subpoena orders the agency to produce documents for a federal grand jury before March 10. An agency spokesman, Matt Shelby, said it would provide whatever requested records are in its possession.

Kitzhaber insisted he broke no laws.

"Nonetheless, I understand that I have become a liability to the very institutions and policies to which I have dedicated my career and, indeed, my entire adult life," he said in a statement.

The announcement of the planned resignation capped a wild week in which Kitzhaber seemed poised to step down, then changed his mind, but ultimately bowed to calls from legislative leaders that he quit.

It's a stunning fall from grace for a politician who left the governor's office in 2003 and then mounted a comeback in 2010 and returned to his old job.

In a long statement announcing his decision, a defiant Kitzhaber cast blame on the media and on "so many of my former allies" who did not stick up for him. His staff released an audio recording of him reading the statement. Near the end, his voice trembled and he seemed to choke back tears.

But the allegations surrounding the work of his fiancée were more damaging, dominating headlines in the state following his victory.

A series of newspaper reports since October have chronicled Hayes' work for organizations with an interest in Oregon public policy. At the same time, she was paid by advocacy groups and played an active role in Kitzhaber's administration, a potential conflict of interest.

The spotlight on Hayes led her to reveal that she accepted about $5,000 to illegally marry a man seeking immigration benefits in the 1990s. Later, she admitted she bought a remote property with the intent to grow marijuana.

A fiercely private person, Kitzhaber has been forced to answer embarrassing and personal questions about his relationship. In response to questions at a news conference last month, Kitzhaber told reporters that he's in love with Hayes, but he's not blinded by it.

Kitzhaber, 67, met Hayes, 47, before the 2002 election, when he was governor and she was a candidate for the state Legislature. She lost her race, but they later reconnected after Kitzhaber's term ended.

Hayes used the title "first lady," though the couple never married, and she took an active role in his administration. They were engaged last summer.

"One thing I hope people know about me is that I love this state and its people, its rivers, its mountains and its landscapes with every fiber of my being," Kitzhaber said in is parting statement. "It is because of that love that I tender my resignation."