"Our adversaries around the world -- Iran, Russia and Venezuela and China -- they are looking at the United States and its chief representative, the president of our country, who is unable to get through even a softball interview without a cheat sheet and falls three times going up a flight of stairs. It's sad to watch," Miller said during an appearance on Fox News' "Hannity."

Earlier Friday, Biden stumbled multiple times as he ascended the steps to board Air Force One at Joint Base Andrews in Maryland. 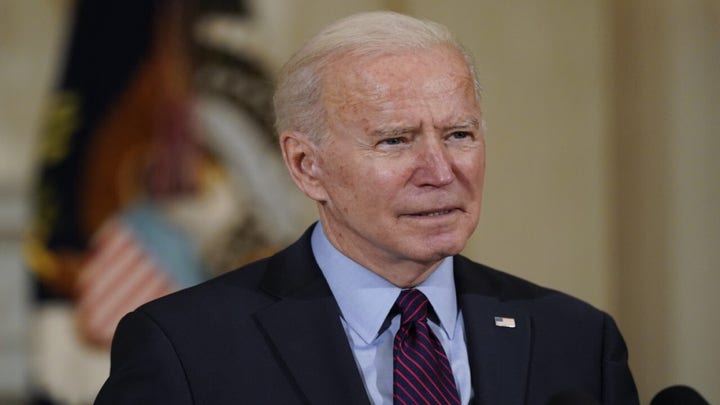 Hannity noted that the media has been largely silent on Biden's tripping incident, contrasting that with wall-to-wall coverage of then-President Donald Trump gingerly walking down a ramp following an event in West Point, New York.

He played clips of Associated Press reporter Jonathan Lemire and MSNBC's Joe Scarborough criticizing Trump and theorizing about his fitness for office.

At the time, Lemire said Trump's physical state should have made it difficult for him to criticize Biden during the 2020 presidential campaign.

"I am pointing out what is obvious, because he is the President of the United States, the leader of the free world, the commander-in-chief. This is the hardest job in the world -- the most demanding job in the world," Hannity said.

US OFFICIAL ACCUSES CHINA OF 'GRANDSTANDING' IN TENSE BILATERAL TALKS

Later in the segment, Miller said that Russian President Vladimir Putin distinctly recognizes Biden's apparent state of acuity, which is why the ex-KGB agent recently challenged the American president to a live debate after being called "a killer."

"They are openly mocking us. They are mocking President Biden. It's humiliating and that is compounded by the fact when you have a commander-in-chief who is 'not home' and not there," he said.

"They are openly mocking us. They are mocking President Biden. It's humiliating."

"You'll have embarrassing episodes like what happened in Alaska where China dared to lecture us on human rights. And [Secretary of state Antony] Blinken and [National Security Adviser Jake] Sullivan just sit there and take it?" he fumed.

Miller concluded that the U.S. diplomats were "apologizing for America" in part because they have "no leadership at the top."

"The president is not home. Other countries see that weakness and they are pouncing and we are all less safe."