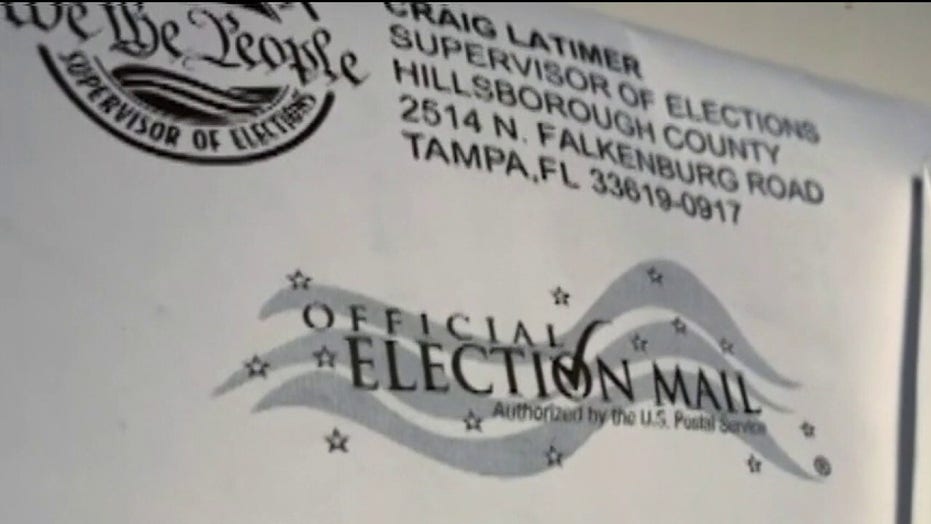 Absentee, early voting numbers on pace to break records in 2020

Eight states allow voters to resubmit mail-in ballots after they have already sent them in to be counted, according to 37 out of 50 state election officials who responded to inquires from Fox News.

The laws allow residents in eight states who have already voted for select candidates by mail to change their minds, usually within a specific time frame after the first ballot has been cast. In some states, voters can resubmit ballots several times.

In Arkansas, voters can resubmit absentee ballots up to two times.

Connecticut voters may withdraw previously submitted absentee ballots from their town clerks until 5 p.m. on the Friday before Election Day.

Voters can "then either vote in person in a polling place or fill out a new application for an absentee ballot," a Connecticut election official told Fox News.

Voters in Delaware can contact their county elections office if they wish to make a change to their submitted absentee ballots.

"If a voter has already returned their voted absentee or vote-by-mail ballot, and then wish to make a change, the voter should contact their county elections office as soon as possible to determine if this will be feasible," a spokesperson for State Election Commissioner Anthony Albence said.

In Michigan, voters wishing to change their mail-in ballots must submit written requests to their city or town clerks.

In Minnesota, voters can change their absentee votes as long as they do so at least 14 days prior to Election Day.

Wisconsin voters can resubmit mail-in ballots if they do so on time.

FLORIDIANS HAVE ALREADY CAST 1.8 MILLION BALLOTS FOR THE 2020 ELECTION

"If you need a new ballot, contact your municipal clerk as soon as possible. If there’s enough time, your clerk can cancel your original ballot and give you a new one," the state's website reads. "Depending on how close you are to Oct. 29 -- the legal deadline for requesting absentee ballots by mail -- you might need to get your new ballot in person."

The process is a bit trickier in New Hampshire, where those who voted by mail can vote again if they show up to a polling place within the first hour it's open or before their absentee ballots are processed.

New York has a similar process in which voters can show up early to the polls on Election Day and vote before their absentee ballots are counted.

Other states allow residents to withdraw their mail-in ballots and vote in-person on Election Day, including Idaho, Illinois, Indiana, Mississippi, Pennsylvania and New Mexico. Some of these states require voters to sign an affidavit canceling their absentee ballots before voting in person.

Voters in most states can also receive new ballots if they have incorrectly filled out their first ballots so as long as they have not been submitted and they contact their local election clerks on time.