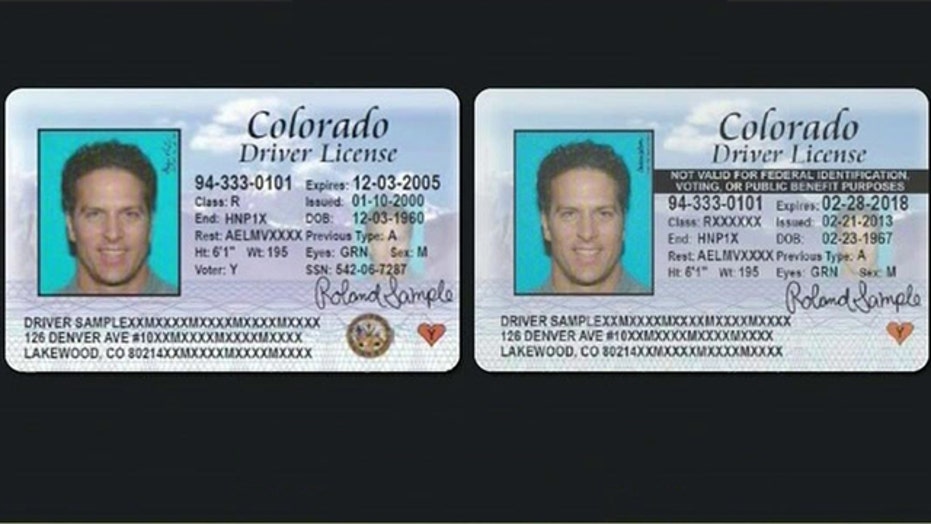 After the 9/11 attacks, Congress passed the REAL ID Act to prevent foreign nationals from fraudulently obtaining a U.S. driver's license -- by requiring that any ID issued based on unverifiable foreign documents look different in "design or color" from an official driver's license.

That way, TSA and other law enforcement would know the ID holder might not be who they say they are.

But more than a decade later, several state and local governments are openly flouting the law, issuing ID cards that are barely distinguishable from a bona fide driver's license. That means those with mere ID cards, like illegal immigrants, might be able to pass off their cards as a driver's license at the airport and elsewhere -- creating a huge gap in security.

Examples include Washington, D.C., and Colorado.

For card-holders in the nation's capital, a small star in the corner is the only visual cue that distinguishes a D.C. license from a mere ID card.

In Colorado, the distinguishing characteristic for the ID cards is a small black band.

"If you could issue a letter grade to the way states are handling this, it would be an 'F'," said Andrew Meehan, of the Coalition for a Secure Driver's License.

From the outset, states have chafed at the new federal rules. They called the policy an unfunded mandate and federal intrusion.

More recently, advocates for illegal immigrants have opposed the parts of the law that require "noncompliant" cards for undocumented workers to look different than licenses for U.S. citizens and legal residents.

"What we object to is states that gratuitously would try to do much more than necessary for the sole purpose of stigmatizing individuals," said American Civil Liberties Union lawyer Jon Blazer. "On the other hand, some states have taken a better approach in this regard, and have put the minimal requirements that they're obliged to put under federal law."

However, six of those states issue ID cards that look virtually identical to a standard driver's license, violating the act's language. Since January alone, one of those states -- California -- has issued licenses to 500,000 illegal immigrants.

"In California they are accepting hundreds of documents issued by foreign governments," Meehan said. "They are very difficult to verify."

Other than the words, "federal limits apply," the California license and ID are identical.

Compare those to Illinois, which uses different colors in the two sets of IDs, and Utah, which uses a different design entirely. North Carolina proposed using a bright pink banner to distinguish a license from one issued to illegal immigrant children given lawful status, but it backed down.

"North Carolina proposed to put a hot pink color on the licenses of young immigrants sometimes known as 'dreamers' and one could not really understand any legitimate reason for doing that other than to stigmatize and give them a scarlet letter," Blazer complained.

In passing Real ID, Congress said the law was about security, not about stigmas. Indeed, three 9/11 hijackers had obtained state IDs using fraudulent documents. One had four IDs from two states. Among them, the 33 hijackers had 33 state driver's licenses.

The law is meant to set the standards for states issuing licenses, and the types of acceptable source documents. If unverifiable documents are used, that's when the ID cards are supposed to look different from regular licenses.

Meehan says states do not have the resources to verify the accuracy of source documents from foreign countries. Blazer, though, says they do.

Typically, states accept one of three forms of ID from Mexico: A passport, a Mexican elections card or a Matricula Consular card, which reports show can be obtained without a verifiable source document.

Verification problems have fueled changes at the state level.

In 2011, Utah issued 'Marcelo Marquez' a state driver's privilege card. At the time, getting the card required multiple identifying documents, but no fingerprints or photo. It turned out the source documents were fakes.

Marquez was really Luis Enrique Monroy-Bracamonte, deported twice for violent crimes and drug dealing. Bracamonte used the Utah ID to get around the country until last year, when he killed two California deputies after a car chase.

Utah now requires fingerprints for non-residents and changed the look of its ID cards to distinguish them from a license.