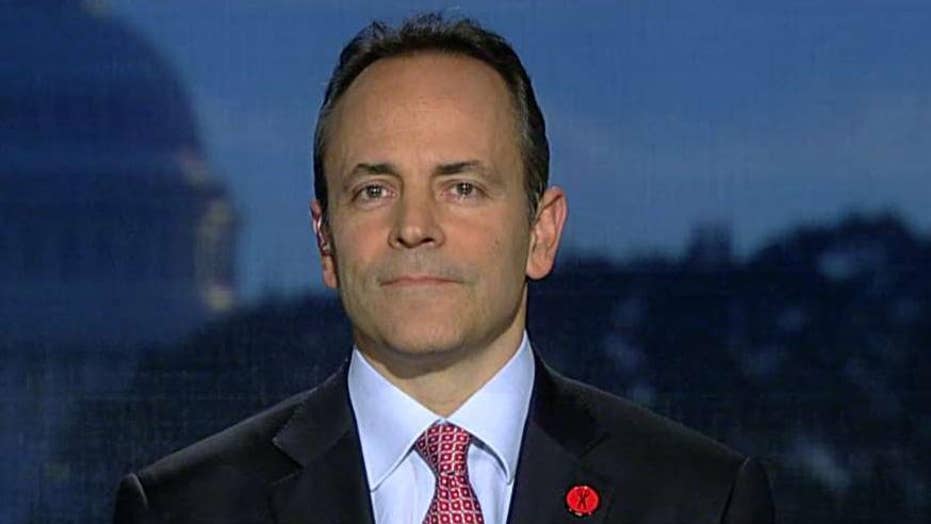 Kentucky governor shares his perspective on 'Your World.'

INDIAN WELLS, Calif. – When it comes to preparing prisoners for their return to society, Kentucky Gov. Matt Bevin says his state and many others have failed.

Bevin offers a simple explanation for his passion on criminal justice reform, saying, “It matters.”

Bevin was a featured speaker at this weekend’s Freedom Partners event for more than 500 donors of the influential Koch network of non-profit organizations. The broad message from Bevin and others was that get-tough-on-criminals policies of the past did not serve the country well.

“The goal of our criminal justice system at all times is to keep us safer and give us second chances,” Koch Industries Mark Holden told reporters. “I think our system has miserably failed us in the last 30-40 years.”

Holden points to several data points demonstrating that “everything is out of whack.” He says the number of Americans with criminal records outnumbers those with college degrees -- and that governments spend several times more on incarcerations than grade school education.

“Reentry begins day one of incarceration,” Holden argues. “What we want to do is change the mindset of the people who are incarcerated in prisons and the people who run prisons -- that prison is not the end of the line.”

It’s an issue that has drawn bipartisan interest in Washington in recent years, with optimism from federal lawmakers who think a prison-reform law can pass in the months ahead. However, the GOP-led Congress’s efforts to reform the country’s health-care system and tax code and now perhaps fix its aging infrastructure has made criminal-justice reform a lesser priority.

And whether President Trump would sign such legislation into law seems uncertain, considering he won the White House as a law-and-order candidate who sounded unsympathetic to drug dealers and those who perpetuate violence the county’s crime-plagued cities. Moreover, Attorney General Jeff Sessions recently signaled that the federal government will return to a more strict enforcement of marijuana laws.

Bevin highlighted the reforms in Kentucky including the elimination of a line item on state employment forms requiring notice of a criminal record. And he pointed to efforts to relax or eliminate restraints on ex-cons from getting business licenses, vote and otherwise fully participate in society.

He says addicts couldn’t be threatened or scared into better behavior to keep them out of trouble.

Judges “are very, very disappointed that often times prison and probation are the only the only two options that most trial judges have and they simply don’t work,” Boggs says.

With the state’s new emphasis on moving drug-fueled criminals away from prison and toward treatment, Georgia is at a 15-year low for new prison sentences. It’s a huge shift in sentencing priorities from just a few years ago.

Also highlighted this weekend is a new academic study by a Florida State University professor called “Safe Streets and Second Chances.” The trial program will work in four states this year to better prepare more than 1,000 prisoners for life on the outside.

The trial, underwritten with a $1 million grant from the Charles Koch Foundation, aims to remove barriers to success for those reentering society by helping them make the transition and address substance abuse issues. The trial program also will offer career training and help on forming positive societal relationships -- with the goal of making sure that people leaving prison don’t return.