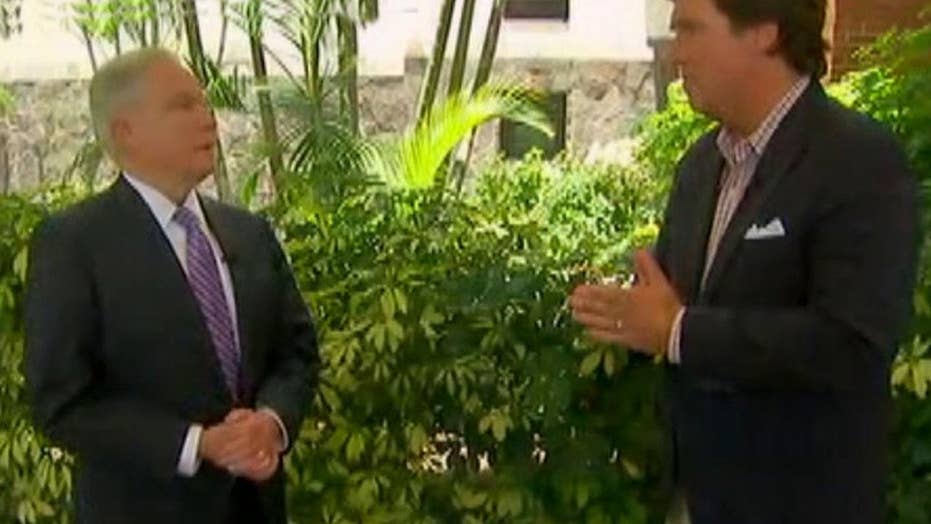 Sessions: Trump attacks 'hurtful' but I intend to do my job

Attorney General Jeff Sessions, in an interview Thursday with Fox News’ Tucker Carlson, stood firmly by his recusal from the FBI’s Russia investigation – saying he made “the right decision,” despite the criticism he faces from President Trump.

Speaking with "Tucker Carlson Tonight" in El Salvador, Sessions admitted Trump’s criticism has been "kind of hurtful," but insisted he would continue in the job unless Trump fired him.

"I serve at the pleasure of the president," Sessions said. "If he wants to make a change, he can certainly do so and I would be glad to yield in that circumstance, no doubt about it."

Trump has repeatedly slammed Sessions in media interviews and on Twitter over the attorney general's decision in March to recuse himself from the FBI's investigation into Russian activities during last year's election campaign.

"I understand [Trump’s] feelings about it, because this has been a big distraction for him," Sessions told Tucker Carlson. "[But] I’m confident I made the right decision. The decision is consistent with the rule of law. An attorney general who doesn’t follow the law is not very effective in leading the Department of Justice."

Sessions was in San Salvador Thursday as part of a two-day trip meant to bolster cooperation with the Central American nation in the fight against the MS-13 street gang, which the attorney general has described as a top security threat to the United States.

"I do believe that we are making tremendous progress," said Sessions. "We had a 25 percent increase in prosecution of criminals with guns just this last quarter, the first real quarter that I’ve been in office … We’ve achieved, in many ways, more than I thought at this point in time."

Sessions pointed out that despite the rift over his recusal, he and Trump share "a common interest" in cracking down on crime and illegal immigration.

"I believe that I understand [Trump’s] mission. I understand his goals," the attorney general said. "That’s why I supported him for president. I share his beliefs that we’ve got to do more about crime, more about illegal immigration, more about gangs and violence and it’s an honor and a pleasure to be able to lead that effort."

Sessions also told Carlson that the Justice Department would step up its investigation and prosecution of what he called “criminal leaks” after a series of reports detailing the progress of the Russia investigation and disclosing sensitive national security information.

"It cannot continue. Some people need to go to jail," warned Sessions, who vowed, "If we can make cases, they are going to jail … The president has every right to ask the Department of Justice to be more aggressive in that, and we intend to."