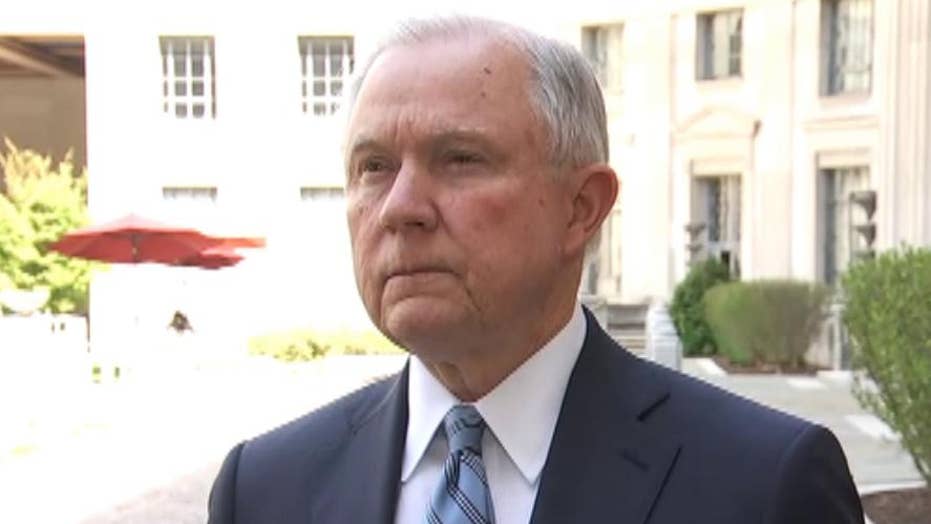 Attorney General Jeff Sessions announced Wednesday that the Justice Department was sending dozens of additional prosecutors and immigration judges to the U.S.-Mexico border to pursue cases against illegal border crossers, while warning members of a controversial "caravan" that they "should wait their turn" to enter the U.S.

According to Sessions, 35 assistant U.S. attorneys would go to the frontier to "prosecute illegal entries into our country," while 18 immigration judges would focus "full time" on clearing a backlog of asylum claims.

"We are not going to let this country be overwhelmed," Sessions told reporters in Washington. "People are not going to caravan or otherwise stampede our border. We need legality and integrity in the system. People should wait their turn, ask to apply lawfully before they enter our country."

Sessions spoke after 28 members of a caravan of Central Americans seeking asylum in the United States were accepted for processing by border inspectors at San Diego's San Ysidro crossing.

U.S. officials are up against something known as the "Flores decision," which requires the federal government to release female and child asylum seekers in 21 days after their detention in the "best interests" of the child. U.S. officials previously said they hoped to detain each immigrant through the end of his or her  case, at which time the immigrants would either be sent home or been given the right to stay in the U.S.

Alex Mensing of Pueblo Sin Fronteras, the advocacy group that helped organize the caravan, responded to the stepped-up U.S. resources.

"I don't think they’re gonna be capable of handling these people in two to three weeks because that is not how the process works," he told Fox News.

"If the government has a way of making it happen that quickly that would be very interesting, but it would also probably be a violation of due process," Mensing said, "because once they detain, they have no access to evidence or legal aid or any of the kinds of services you need to be able to actually prepare a case."

Most of the would-be immigrants say they are fleeing Central America because of violence, gang threats, a better job and the pursuit of economic opportunity. However, none of those rationales -- including violent conditions -- are viewed as criteria for asylum. Which may explain why, according to data compiled by Syracuse University’s Transactional Records Access Clearinghouse, 75 percent of asylum claims from Honduras, Guatemala and El Salvador were rejected between 2011 and 2016.

But because of a backlog in immigration court of some 700,000 cases and a three-year wait, most asylum applicants are released to relatives, with a work permit, until their case is heard.

However, government figures show up to 84 percent of asylum claimants ignore their notice to appear in court and remain free. Without a criminal record, there is little or no chance of being on the ICE radar as a priority target for enforcement. Sessions' announcement Wednesday is meant to disrupt the status quo.

"If you don’t want to have to go through this problem, don’t come unlawfully," Sessions said Wednesday. "It's not my problem. It's not the United States Border Patrol's problem when people try to force their way into the country unlawfully."

At the makeshift Tijuana tent city near the San Ysidro port of entry, officials have expressed concerns about the asylum seekers' health, bringing in a mobile clinic to examine the children. Some have developed ear infections as temperatures fell to the low 50s and rain fell sporadically on Tuesday and Wednesday.

Mexican officials want the women and children to return to the border shelters, but most have refused for fear of losing their place in line. Periodically, Mensing used a bullhorn to announce the names of those who had been selected to enter the queue to have their asylum claims heard by U.S. immigration officials.

Immigration lawyers say those with the best chance of getting asylum are those with claiming political persecution or sexual discrimination. Several of those moved to the front of the line are transgender.

"We are not going to move away from that door until they hear us and give us a positive answer," Marjorie Alexandra "La Osa", a transgender migrant from Honduras, told Reuters. "We are not criminals, we are people fleeing from our country."

The caravan, which at times grew to more than 1,000 people, began wending its way toward the U.S. on March 25 and eventually incurred the wrath of President Donald Trump, who repeatedly tweeted that it was a gross example of lax immigration laws.