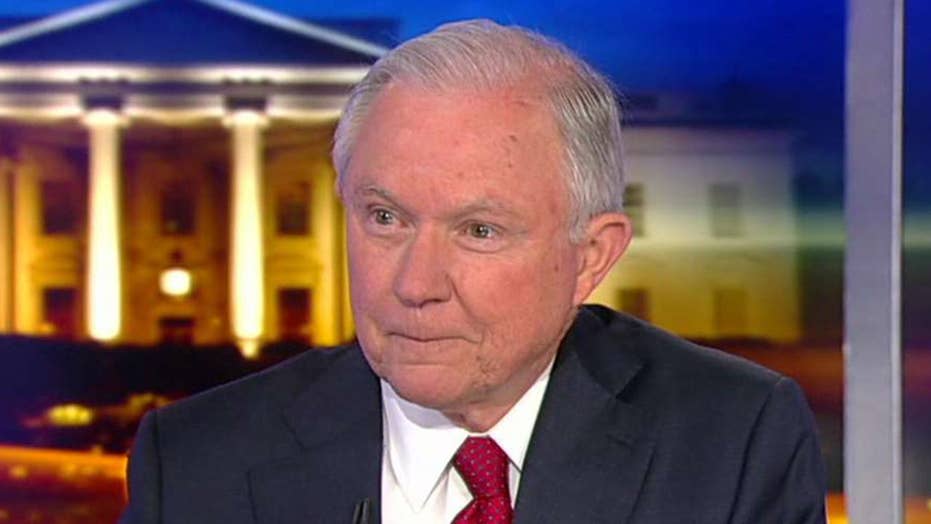 Sessions: Too much suppression of free speech on campus

Attorney General Jeff Sessions tells Tucker why the Justice Dept. is entering the legal fight over free speech on college campuses. Plus, Sessions sounds off on Trump vs. NFL #Tucker

Attorney General Jeff Sessions said Tuesday that his Justice Department will enter the legal fight over free speech on college campuses, as he delivered a blistering speech at Georgetown University Law Center declaring freedom of thought and speech is “under attack.”

“Starting today, the Department of Justice will do its part in this struggle. We will enforce federal law, defend free speech, and protect students’ free expression from whatever end of the political spectrum it may come,” Sessions told an audience of Georgetown students.

The speech marked the attorney general's entry into a raging national debate, largely over protesters effectively shutting down conservative speakers on American campuses.

During his remarks at Georgetown’s Constitution Center, the Justice Department simultaneously filed a statement of interest in a free-speech case siding with students who said their rights were limited.

“We will be filing more in the weeks and months to come,” Sessions said.

The Justice Department argued that the college’s speech policies were not content-neutral and were not “narrowly tailored to achieve a compelling government interest.”

“A national recommitment to free speech on campus and to ensuring First Amendment rights is long overdue,” Sessions said.

Ahead of Sessions' address, a group of more than 30 Georgetown law professors signed onto a letter condemning what they called “the hypocrisy” of Sessions' appearance. They cited President Trump's ongoing feud with NFL players who kneel during the anthem and other complaints about Sessions' DOJ.

“Attorney General Jeff Sessions is a key cabinet member in an administration headed by a President who spent last weekend denouncing athletes engaged in free expression and calling for them to be fired,” the professors wrote Monday night.

The professors went on to cite other examples of why they think Sessions is unfit to deliver this address, including his department's prosecution of a protester who disrupted his confirmation hearings.

In the question-and-answer exchange after Sessions’ remarks, the attorney general defended the president’s “free speech rights.”

“The president has free speech rights too. He sends soldiers out every day to defend this country, under the flag of the United States, under the national anthem,” Sessions said. “I agree there is a big mistake to protest in that fashion because it weakens the commitment we have to this nation that has provided us this freedom.”

Sessions added that while the players obviously are not subject to prosecution, they should be prepared to be condemned if they pursue a “provocative act.”

But in his prepared speech, Sessions focused solely on the issue of free speech on college campuses.

“The American university was once the center of academic freedom—a place of robust debate, a forum for the competition of ideas,” Sessions said. “But it is transforming into an echo chamber of political correctness and homogenous thought, a shelter for fragile egos.”

GEORGETOWN FACULTY ALREADY CLASHING WITH SESSIONS AHEAD OF FREE-SPEECH ADDRESS

Sessions cited a 2017 survey conducted by the Foundation for Individual Rights in Education, which measured 450 colleges and universities across the country, finding that 40 percent maintained speech codes that “substantially infringe on constitutionally protected speech.”

Sessions went on to note a number of examples of public colleges and universities that had written policies banning disfavored speech -- specifically citing Boise State University in Idaho, for its ‘Student Code of Conduct’ prohibiting conduct that “a reasonable person would find offensive”; and Pierce College, a public school in California,  for “free speech zones” that he said spanned “616 square feet.”

Sessions also noted “frightening” disruptions at college campuses across the nation – criticizing Middlebury College students for engaging in a “violent riot” to “ensure that neither they nor their fellow students would hear speech they may have disagreed with.”

“College administrators also have silenced speech by permitting the ‘heckler’s veto’ to control who gets to speak and what messages are conveyed,” Sessions said. “In these instances, administrators discourage or prohibit speech if there is even a threat that it will be met with protest. In other words, the school favors the heckler’s disruptive tactics over the speaker’s First Amendment rights.”

Sessions cited the protesters that “successfully” shut down campus speaker events at the University of California Berkeley, which was reportedly forced to spend more than $600,000 to have an “overwhelming” police presence to “prove the mob was not in control of the campus.”

“I promise you that no issue is better decided with less debate, indifference, and with voices unheard,” Sessions said.

He also mentioned the violence surrounding the recent white supremacist rally in Charlottesville, Va. The Trump administration has faced criticism for its response to those clashes.

“Let me be clear that protecting free speech does not mean condoning violence like we saw recently in Charlottesville,” Sessions said. “Indeed, I call upon universities to stand up against those who would silence free expression by violence or other means on their campuses.”