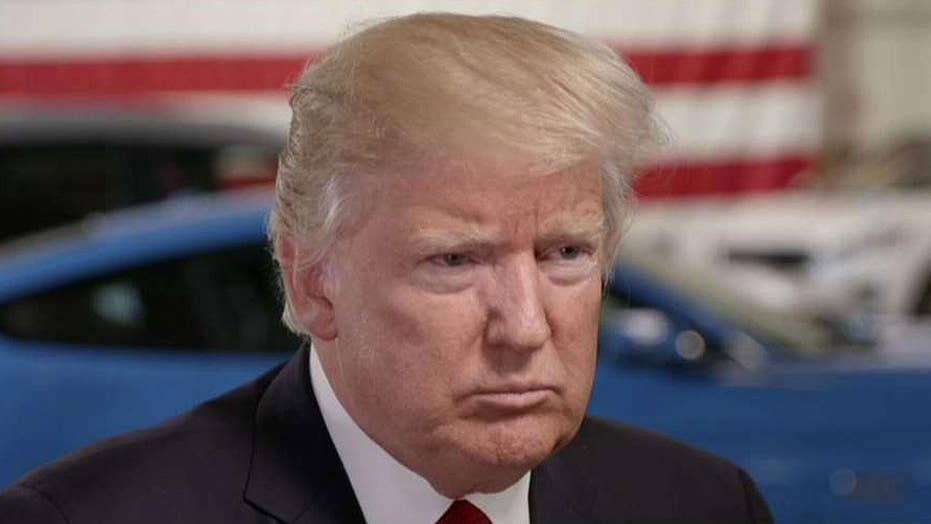 Exclusive: President Trump on the battle over the GOP replacement plan for ObamaCare, wiretapping allegations, the 'illegal, disgraceful' leaking of his tax records to media and more #Tucker

Two top senators said Thursday they see "no indications" that Trump Tower was surveilled “by any element of the United States government,” in one of the most definitive bipartisan rejections to date of President Trump's wiretapping allegation.

“Based on the information available to us, we see no indications that Trump Tower was the subject of surveillance by any element of the United States government either before or after Election Day 2016,” the statement from Burr and Warner said.

The language used by the senators was a degree more definitive than that used by House Intelligence Committee Chairman Devin Nunes, R-Calif., who Wednesday said his committee didn’t “have any evidence” wiretapping took place.

Nunes also said there was no “actual tap of Trump Tower,” saying he believed Trump was discussing surveillance in a broad sense when he sent his initial tweet. He added that communications by Trump aides may have been gathered as part of "incidental" collection.

"It's interesting to me that just as a point of interest, when one entity says one thing that claims one thing, you guys cover it ad nauseum," he said at his daily press briefing. "When Devin Nunes said it's very possible, there was crickets. When he said there was no connection to Russia -- crickets."

"Where was your passion and where was your concern when they said there was no connection to Russia?" he asked ABC's Jonathan Karl.

Some Republicans lawmakers, such as Sen. Lindsey Graham, R-S.C., called on the FBI to make a statement on the matter.

“While I appreciate the House and Senate Intelligence Committees’ chairmen and ranking members putting out bipartisan statements indicating they have seen no evidence of surveillance of Trump Tower by the Obama Administration, I strongly believe that these statements by political leaders should not be a substitute for a public response from the Federal Bureau of Investigation and Department of Justice on this matter," he said.

Amid the attempts of lawmakers in both parties to put the issue to rest, Trump told Carlson on Wednesday that “perhaps” in “this next week” supporting evidence would emerge that the Obama administration engaged in surveillance against Trump and his top lieutenants.

“You’re going to find some very interesting items coming to the forefront over the next two weeks,” Trump said.

Trump’s assertions were first made public in a series of March 4 tweets that appeared to be based off a timeline of news articles reporting Trump associates that had been caught up in surveillance. Each of the articles cited anonymous sources and provided no concrete proof of a surveillance operation.

“Terrible! Just found out that Obama had my ‘wires tapped’ in Trump Tower just before the victory. Nothing found. This is McCarthyism!” Trump tweeted.

He added: “Is it legal for a sitting President to be ‘wire tapping’ a race for president prior to an election? Turned down by court earlier. A NEW LOW!”