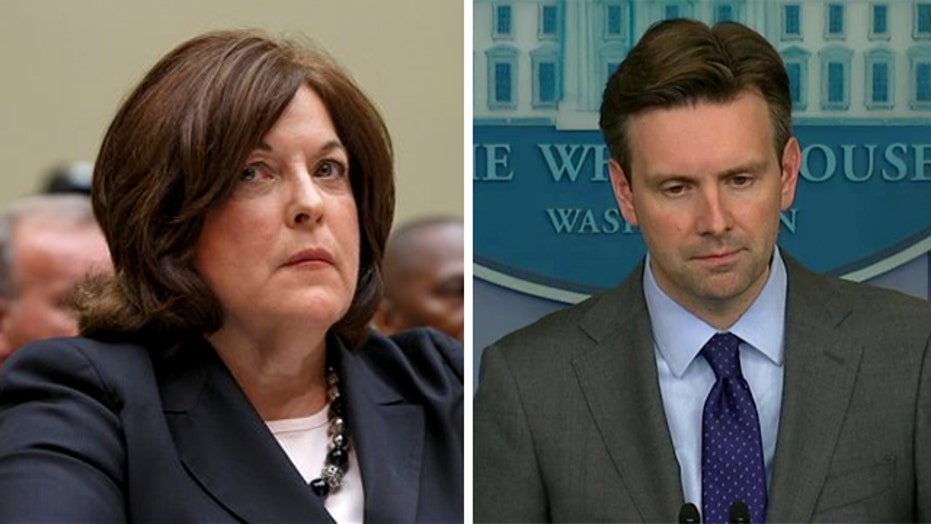 Josh Earnest on shakeup at the Secret Service

Secret Service Director Julia Pierson resigned Wednesday, after a security breach at the White House and other high-profile incidents raised widespread concerns about the safety of the president and his family.

Johnson said: "Today Julia Pierson, the Director of the United States Secret Service, offered her resignation, and I accepted it. I salute her 30 years of distinguished service to the Secret Service and the Nation."

A source familiar with the situation told Fox News that Johnson told Pierson the resignation would be effective immediately, after she offered.

The resignation comes just days after the Sept. 19 incident where an intruder jumped over the White House fence and darted past several layers of security to enter the White House itself. He was able to make it to the East Room before being apprehended.

Pierson's departure, though, marked a sharp turnaround from a day earlier, when despite her rocky performance during congressional testimony the White House voiced support for her leadership. Asked Tuesday whether Obama had confidence in the director, Earnest said "absolutely."

But on Wednesday, the director was facing bipartisan calls to step down. Rep. Elijah Cummings, top Democrat on the committee that grilled Pierson, notably told NPR she is "not the person to lead that agency" -- though he later clarified he thinks she should go if she can't restore public trust.

But he also said Wednesday that "recent and accumulating reports" raised "legitimate questions" about the agency. Earnest said Obama agrees that Pierson's resignation is in the best interest of the agency.

Among those reports was the revelation that on Sept. 16, a security contractor armed with a gun who had previously been arrested for assault rode on an elevator with Obama and his security detail at the Centers for Disease Control and Prevention in Atlanta, violating Secret Service protocol. Earnest said the president only learned about that incident on Tuesday.

New and alarming details also emerged -- seemingly by the day -- about the multiple security failures in the Sept. 19 intrusion. Not until late Monday was it reported that he made it into the East Room, a detail that was confirmed by Pierson during her testimony.

Johnson said that he now agrees that a "panel of independent experts" should review the Sept. 19 incident -- something that had been called for by lawmakers. He said such a panel will submit its assessment and recommendations by Dec. 15.

"I will also request that the panel advise me about whether it believes, given the series of recent events, there should be a review of broader issues concerning the Secret Service. The security of the White House compound should be the panel's primary and immediate priority," he said.

He said a separate internal review will be completed by Nov. 1.

Johnson said he's appointing Joseph Clancy, a former special agent in charge of the Presidential Protective Division who retired in 2011, as interim director.

The Sept. 19 incident involving a Texas Army veteran who jumped the White House fence and was able to make it deep into the Executive Mansion before being stopped is now just one of several embarrassing disclosures about lapses in presidential security involving the Secret Service.

Despite more than three hours of questioning by House lawmakers on Tuesday, Pierson neglected to mention the incident in Atlanta. Her failure to do so prompted Rep. Jason Chaffetz, R-Utah, to call for Pierson's resignation -- or firing -- in an interview with Fox News Tuesday night. In a statement on Wednesday, Chaffetz welcomed the decision to step down and urged the president to fill the post with "new leadership from outside the Secret Service for a fresh start."

At Tuesday's hearing, Pierson said she was the one who briefs Obama on threats to his personal security and said she had briefed him only once this year, "for the Sept. 19 incident." She also disclosed that shortly before the alleged intruder, Omar J. Gonzalez, scaled the fence at least two of her uniformed officers recognized him from an earlier troubling encounter but did not approach him or report his presence to superiors.

Lawmakers were aghast, too, about a four-day delay in 2011 before the Secret Service realized a man had fired a high-powered rifle at the White House, as reported by the Washington Post on Sunday.

Pierson told the hearing the security plan for protecting the White House was not "properly executed" on Sept. 19. The Secret Service's story about the extent of that breach changed late Monday night after the Washington Post first reported that Gonzalez got well past the front door of the White House. Previously it had said Gonzalez had been stopped just inside the front door. After hours of questioning Tuesday, it remained unclear what and when Pierson and Johnson knew about the incident. The Secret Service is part of the Homeland Security Department.

The Sept. 19 breach was the latest black eye for the agency. Pierson was originally brought in early last year after the 2012 prostitution scandal in Colombia.

Gonzalez was indicted Tuesday and pleaded not guilty on Wednesday before Magistrate Judge Deborah A. Robinson in U.S. District Court.