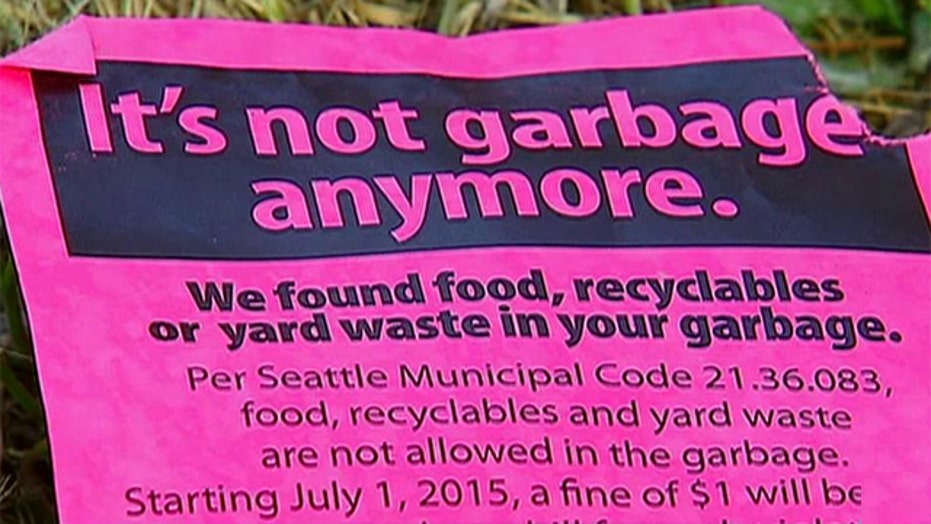 When it comes to garbage, the city of Seattle has launched a waste war.

Nine full-time solid waste inspectors have been hired as part of a controversial program to check city trash to make sure people are recycling. Additionally, contracted waste haulers have been effectively deputized as trash police, given the authority to tag bins when people fail to recycle and compost enough.

The program is now the subject of a lawsuit, as residents fume over what some call an intrusive government program.

“I understand people have noble goals,” said Keli Carender, who got tagged two weeks in a row, an offense that soon could bring a fine. “But at some point we have to say, you can’t violate my rights to achieve this noble goal.”

Carender is among 14,000 residential and commercial customers this year to get tagged. The sticker warns them that more than 10 percent of their trash content should have been recycled or put into compost bins.

She and several other so-called landfill scofflaws have sued the city, claiming it’s an invasion of their privacy. While the U.S. Supreme Court has ruled garbage, once left at the curb, is not protected private property under the 4th Amendment of the Constitution, residents have additional privacy protections in the Evergreen State.

“The Supreme Court of Washington state went the other direction,” said Ethan Blevins, an attorney with the Pacific Legal Foundation who filed the lawsuit. “[It] said our state Constitution provides better protection, and we believe that people expect that our garbage is going to be protected from prying eyes.”

Blevins cites a ruling in which a criminal conviction was overturned on the grounds that the police found a key piece of evidence in the suspect’s trash without first obtaining a search warrant.

Seattle City Attorney Pete Holmes issued a defense of the policy in a written response to the lawsuit. He said he believes the policy upholds the state Constitution and civil liberties because, “there is no intention of opening trash bags. Containers are only tagged if the contamination is clearly visible.”

The mandatory composting ordinance calls for fines ranging from $1 to $50 starting Jan. 1. There isn’t an appeals process, because the evidence is hauled away to the landfill.