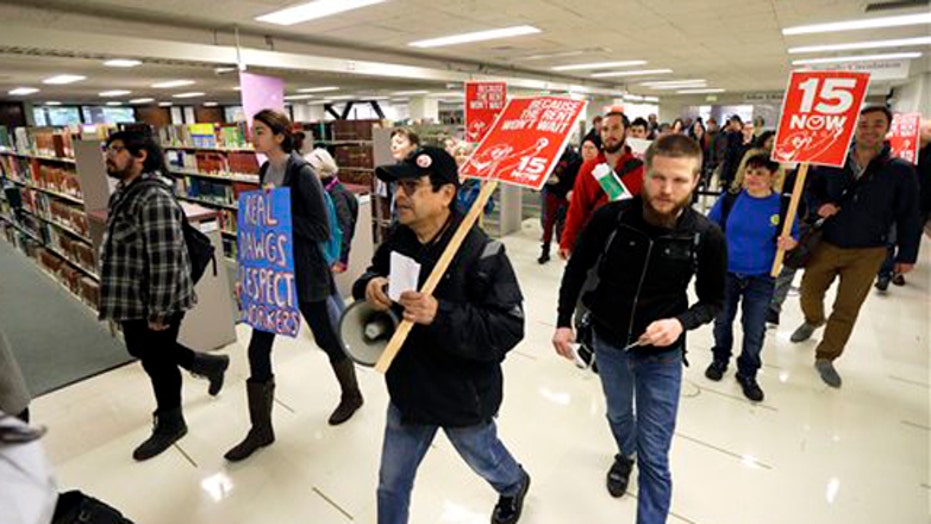 University of Washington to comply with city's new law

Eating meals out in Seattle just got more expensive as tens of thousands of low wage workers got a raise this week to $11 an hour. It was the first scheduled pay increase on the way to $15 an hour, the highest minimum wage in the country.

It also raised menu prices 21 percent. The famous Fish ‘n Chips will run you $20.60 and the Wild Alaska Halibut is now $43.50. The restaurant also wrote on the menu, "Tipping is no longer necessary…we have changed the way we pay our employees."

But that’s not all. In order to keep servers, who used to earn an average of $27 an hour, from quitting, Ivar’s is now sharing revenue among all workers. Owners believe the new formula will have servers and bartenders making the same amount or more money, while dishwashers, cooks and busboys will get a nice pay raise. Of course, it all depends on the amount of business the restaurant does.

“I don’t have a choice but to increase prices,” said Subway franchisee David Jones. “I just hope that the public rewards us for giving good service and having good food.”

But not everyone is celebrating a fatter paycheck. Public employers may not be bound by the $15 ordinance. Seattle’s biggest employer, with 39,000 employees, is the University of Washington. Officials say the money is not currently there to pay 2,600 student employees $11 an hour. They still are making the state minimum wage of $9.47.

Student workers protested this week and some say they’ll walk.

From the Seattle school district to King County, every other public employer said it now is paying the higher wages. None would detail how they will afford the higher labor costs, but the Seattle College District listed some options. That list includes reduction in services, increase in fees/prices and eliminating services such as catering and fitness centers.

Kshama Sawant, the $15 wage ordinance architect who is a Seattle City Councilwoman and a Socialist, said the University of Washington, in particular, has other ways of affording the raises.

“It is disingenuous for them to say they don’t have enough to pay $15 an hour,” said Sawant, “Why don’t they cut the salaries of the top executives and try to pay $15 and try to increase the wages for the lowest paid workers?”

But critics contend there will be plenty of losers and they won’t be the high rollers. Taxpayers may see taxes go up to pay for higher public employee wages. There’s also concern about the number of jobs and who will fill them.

Paul Guppy, policy analyst at the Washington Policy Center, a Libertarian think tank, said some jobs will leave Seattle, and the least skilled will be squeezed out of those that remain.

“Youth unemployment in particular will be higher in Seattle,” said Guppy. “It will be harder for people to find a summer job or students to add to their income when they’re in college.”

Small businesses have seven years to work up to paying $15 an hour, while big companies that employ at least 500 workers must get there in just three years. It’s a wage experiment that will be watched closely across the U.S.