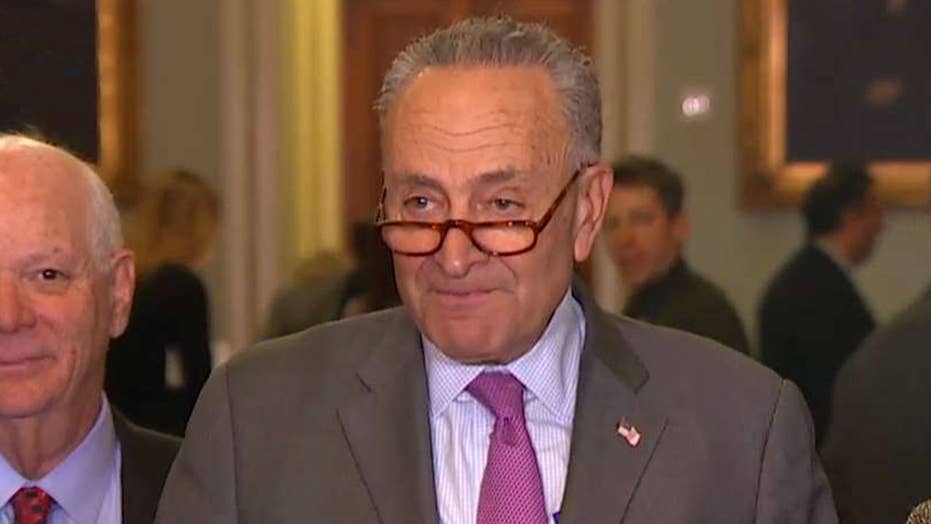 Schumer: This tax plan is a disaster for America

Senate Democratic Leader Chuck Schumer has threatened to block two of President Trump’s Commerce nominees if the department doesn’t speed up its probe into China’s aluminum and steel trade.

Schumer told the New York Times Thursday that he will hold up the nominations of Gilbert B. Kaplan for undersecretary of commerce for international trade and Nazakhtar Nikakhtar for assistant secretary of commerce until the administration follows through on the probe -- which could impose tariffs on cheap Chinese metal products to protect U.S. industries.

Trump signed an executive order in April launching an investigation into whether imports including steel and aluminum from countries such as China pose a threat to national security. The investigation as well as any recommendation for steel tariffs, originally expected from the Commerce Department in June, has seemingly taken a backseat in recent months.

“We felt, O.K, they’ve got the message but they’ve just dragged their feet and delayed and delayed,” Schumer told the Times.

Over the summer, Trump hinted at a shift away from a decision on the steel trade until he had focused on other issues such as repealing ObamaCare.

“You can’t just walk in and say I’m going to do this,” Trump told the Wall Street Journal. “You have to do statutory studies .... it doesn’t go that quickly.

“We’re waiting till we get everything finished up between healthcare and taxes and maybe even infrastructure,” he said.

Schumer says the probe isn’t going anywhere and that for all his tough talk, Trump hasn’t cracked down on China’s trade practices.

Schumer’s comments come ahead of Trump’s upcoming Asia trip, which will include a visit to Beijing.

The nominations could still go through even with Schumer’s “hold” in place, but this would require a cloture vote in the Senate, taking up floor time for debate.