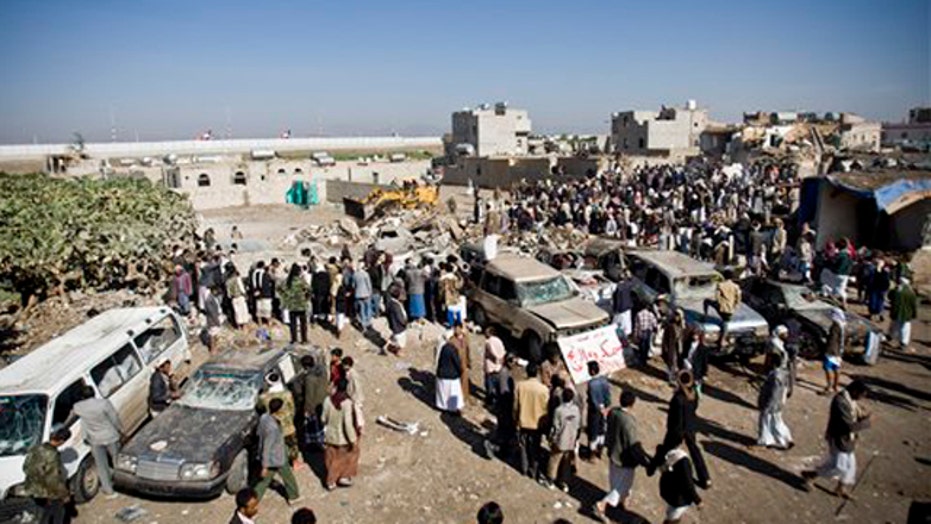 Are we on the brink of regional war in Mideast?

A coalition of Arab nations led by Saudi Arabia launched airstrikes against military bases held by Shiite Houthi rebels in Yemen early Thursday, as Iran warned that Riyadh was taking a "dangerous step."

The statement Thursday from Tehran's Foreign Ministry spokeswoman Marzieh Afkham did not name Saudi Arabia but called the airstrikes an "invasion." The statement went on to claim that the campaign would worsen the already deteriorating security situation in Yemen.

Saudi-owned Al-Arabiya News reported that the kingdom had deployed 100 fighter jets, 150,000 soldiers and other navy units. News footage of the strikes aired by Saudi-owned Al-Hadath TV showed flashing lights and what sounded like machine gun fire.

Some of the strikes hit positions in Yemen's capital, Sanaa. In response, the Houthis, were calling on their supporters to protest in the city's streets on Thursday afternoon, Yemen's Houthi-controlled state news agency SABA reported.

The airstrikes were announced in a rare news conference late Wednesday, Eastern Time, by Saudi ambassador to the U.S. Adel al-Jubeir, who said the Saudis "will do anything necessary" to protect the people of Yemen and "the legitimate government of Yemen." Al-Jubeir said his government had consulted closely with the U.S. and other allies but that the U.S. military was not involved in the operations.

Later Wednesday, National Security Council spokeswoman Bernadette Meehan said that President Obama had authorized the provision of logistical and intelligence support to the military operations She added that while U.S. forces were not taking direct military action in Yemen, Washington was establishing a Joint Planning Cell with Saudi Arabia to coordinate U.S. military and intelligence support.

The Saudi Press Agency published a statement by the United Arab Emirates, Kuwait, Qatar and Bahrain saying they would answer a request from Yemen President Abed Rabbo Mansour Hadi "to protect Yemen and his dear people from the aggression of the Houthi militias which were and are still a tool in the hands of foreign powers that don't stop meddling with the security and stability of brotherly Yemen." Oman, the sixth member of the Gulf Cooperation Council, didn't sign onto the statement.

Egypt also announced political and military support. "There is coordination ongoing now with Saudi Arabia and the brotherly gulf countries about preparations to participate with an Egyptian air and naval forces and ground troops if necessary," it said in a statement carried by the state news agency.

Saudi Arabia and its Gulf allies believe the Shiite rebels, known as Houthis, are tools for Iran to seize control of Yemen and say they intend to stop the takeover. The Houthis deny they are backed by Iran.

The Houthis said in a statement to reporters that Saudi jets hit the military base, known as al-Duleimi, and that they responded with anti-aircraft missiles.

"I hope the Houthis listen to the sound of reason. With what is happening, they forced us into this," he said.

The crumbling of Hadi's government is a blow to Washington's counterterrorism strategy against Al Qaeda's branch in Yemen, considered to be the most powerful in the terrorist network. Over the weekend, about 100 U.S. military advisers withdrew from the al-Annad air base where they had been leading a drone campaign against Al Qaeda in the Arabian Peninsula, or AQAP.

Yemen now faces fragmentation, with Houthis controlling much of the north, including the capital of Sanaa, and several southern provinces. In recent days, they took the third-largest city, Taiz, as well as much of the province of Lahj, both just to the north of Aden.

The Houthis are backed by Saleh, the autocrat who ruled Yemen for three decades until he was removed amid a 2011 Arab Spring uprising. Some of the best-equipped and trained military and security units remained loyal to Saleh and they have helped the Houthis in their rapid advance.

Hadi left Sanaa for Aden earlier this month after escaping house arrest under the Houthis, who overran the capital six months ago. In Aden, he had sought to make a last stand, claiming it as the temporary seat of what remained of his government, backed by allied militias and loyal army units.

With Houthis and Saleh forces closing in on multiple fronts, Hadi and his aides left Aden Wednesday on two boats in the Gulf of Aden, security and port officials told The Associated Press. A Yemeni official earlier Wednesday would not say where Yemeni President Abed Rabbo Mansour Hadi fled to, but did tell Fox News: “He is safe. That's all I can say at this point."

He is scheduled to attend an Arab summit in Egypt on the weekend, where Arab allies are scheduled to discuss formation of a joint Arab force that could pave the way for military intervention against the Houthis.

Fox News' James Rosen and the Associated Press contributed to this report.