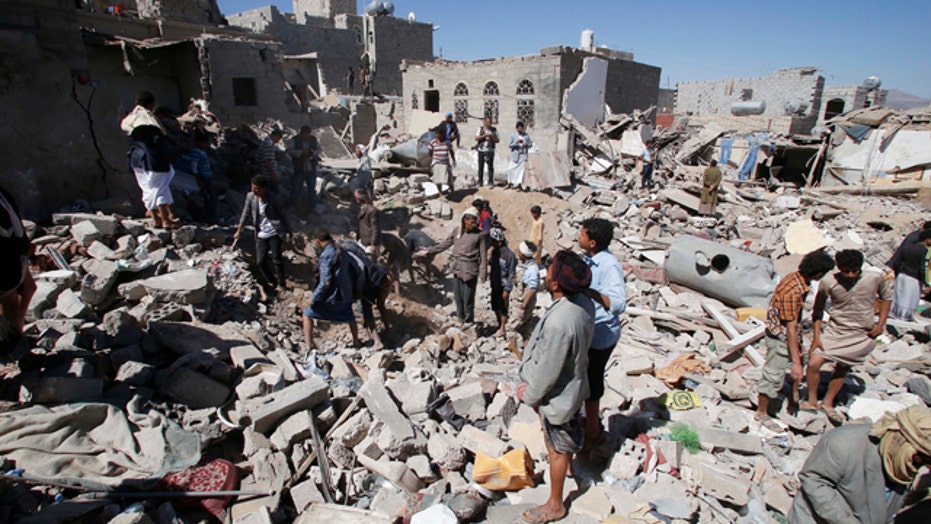 Reports of civilians killed in Saudi-led airstrikes in Yemen

The Saudi-led coalition that is carrying out airstrikes against Houthi rebels in Yemen has dropped cluster munitions made in and supplied by the U.S., a rights group said Sunday.

Human Rights Watch released a report that said the weapons have been dropped from coalition fighter jets targeting military installations and other areas held by Iran-linked Houthis.

In 2008, cluster munitions, bombs that scatter sub-munitions indiscriminately over wide areas of land, were banned by 116 countries for the high number of deaths they cause, according to The Wall Street Journal.

The group says credible video and photo evidence indicated that the munitions were dropped in villages in northern Saada province.

In embattled Yemen, jets “have been hitting areas near villages, putting local people in danger,” Steve Goose, arms director at Human Rights Watch, said. “Saudi Arabia and other coalition members—and the supplier, the U.S.—are flouting the global standard that rejects cluster munitions because of their long-term threat to civilians.”

Neither the U.S. or the nine other members of the Saudi coalition in Yemen are among the 116 signatories of the 2008 Convention on Cluster Munitions, the treaty that banned their use, the journal reports. However, U.S. policy bars their manufacture and export to countries that deploy the weapons in civilian areas.

The World Health Organization says that giving aid to the region has been difficult because of the fighting between Houthis and pro-government forces. The agency estimates that 1,244 people have died and some 5,044 injured since March 19.