White House Press Secretary Sanders was thrown out of a Virginia restaurant on Friday because she works for President Trump -- the latest Trump official to be hounded out of a restaurant because of their political affiliation.

TMZ reported that she was kicked out of the restaurant -- The Red Hen in Lexington, Virginia -- on “moral grounds” and cited a waiter who said that Sanders was served “for a total of two minutes before my owner kicked her out along with seven of her other family members.”

Sanders confirmed the events on Twitter, saying she was told to leave by the owner because she worked for the president.

“Her actions say far more about her than about me,” she said. “I always do my best to treat people, including those I disagree with, respectfully and will continue to do so.”

After initial reports emerged of the incident, users took to the Red Hen’s Facebook and Yelp pages to bombard it with one-star reviews.

“Everyone should boycott this restaurant. Put them out of business. Asking a paying patron to leave because she's a Republican is repulsive,” one Yelp review said.

While the new "reviews" were overwhelmingly negative, the restaurant did get some backing from Trump opponents -- with one saying Red Hen's decision was "truly awesome."

"If some can refuse service to gay’s [sic] then YES others can for immoral lying to American people through WH Press Conferences," a five-star review said on Facebook.

"Bigotry. On the menu at Red Hen Restaurant in Lexington VA. Or you can ask for the “Hate Plate”. And appetizers are “small plates for small minds,” he tweeted.

Calls to the restaurant went to voicemail, which was full. The controversy sparked a panicked tweet from the (unaffiliated) Red Hen in Washington, D.C., which noted that it had nothing to do with the incident.

Sanders’ ejection comes just days after Department of Homeland Security Secretary Kirstjen Nielsen was drummed out of a Mexican restaurant by left-wing activists protesting the separation of children from parents caught crossing the border illegally. 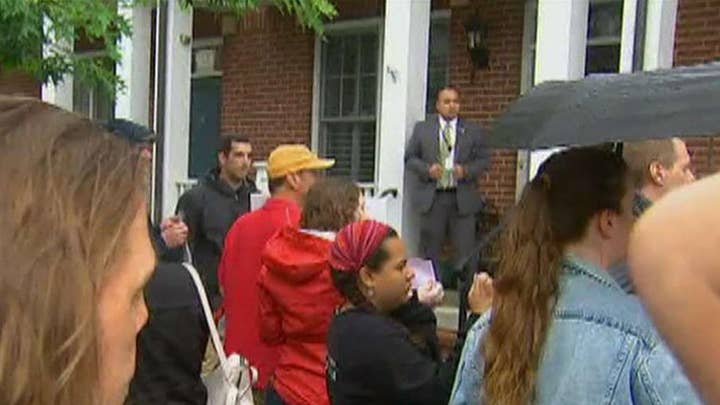 On Friday, a group of protesters gathered outside of her Virginia townhouse, blasting out audio of crying children and chanting “no justice, no sleep.”