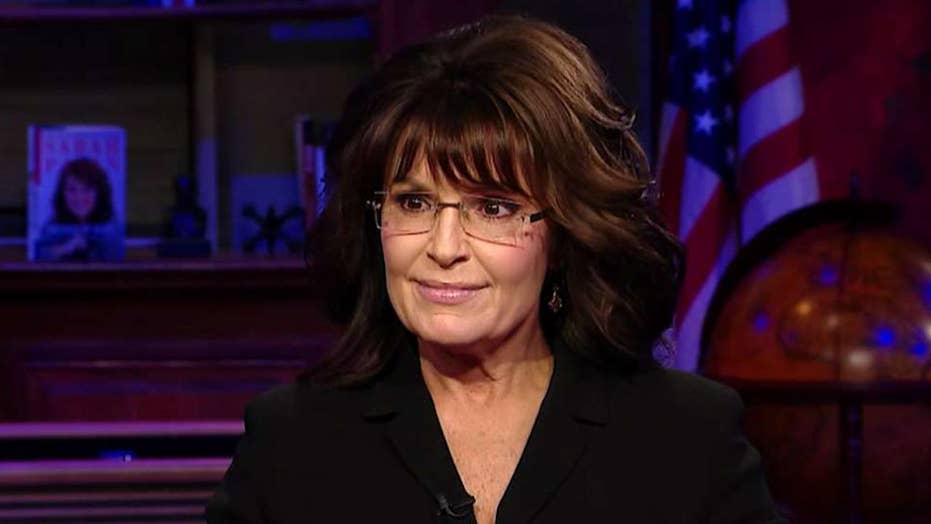 Sarah Palin opens up about running for vice president

Former governor of Alaska discusses her political history of 'going rogue' and how she was treated during the 2008 election on 'Life, Liberty & Levin.'

In 2008, she was chosen to be his running mate – potentially just a heartbeat away from the presidency.

But now former Alaska Gov. Sarah Palin, like President Trump, has been left off the list of invitees to the funeral of the late U.S. Sen. John McCain, according to multiple reports.

“My guess is, it came from Cindy,” a source close to the McCain family told People magazine, referring to the late senator’s widow. “She is very protective of John’s memory and legacy. She’s also a grieving widow. I think she wants to get through this as best she can.”

“My guess is, it came from Cindy. She is very protective of John’s memory and legacy. She’s also a grieving widow. I think she wants to get through this as best she can.”

— Source close to the McCain family, to People magazine

The message was sent through an intermediary, not directly from the McCain family, according to the report.

An NBC reporter tweeted that a Palin "family source" said, “Out of respect to Senator McCain and his family we have nothing to add at this point. The Palin family will always cherish their friendship with the McCains and hold those memories dear.”

Palin did not immediately respond to a Fox News email sent early Thursday.

A decade ago, it was McCain’s selection of Palin to be his vice president that catapulted Palin to the national political spotlight from relative obscurity in Alaska.

But their relationship quickly grew strained, amid accusations that Palin was often unprepared for media interviews, or had “gone rogue” by ignoring the advice of McCain campaign handlers.

Some critics charged that Palin was more interested in advancing her own career – and popularity among conservative voters -- than assuring the success of the McCain-Palin ticket, led by the more moderate McCain.

In May, McCain published a book titled “The Restless Wave,” in which he wrote that he regretted choosing Palin as his running mate instead of his close friend, former U.S. Sen. Joe Lieberman of Connecticut.

McCain and Palin ultimately lost the White House in 2008 to Barack Obama and Joe Biden.

“Today we lost an American original,” she wrote. “Sen. John McCain was a maverick and a fighter, never afraid to stand for his beliefs. John never took the easy path in life - and through sacrifice and suffering he inspired others to serve something greater than self.”

Later, she wrote: “John McCain was my friend. I will remember the good times. My family and I send prayers for Cindy and the McCain family.”